Pandemic takes toll on business of pisco producers in Peru 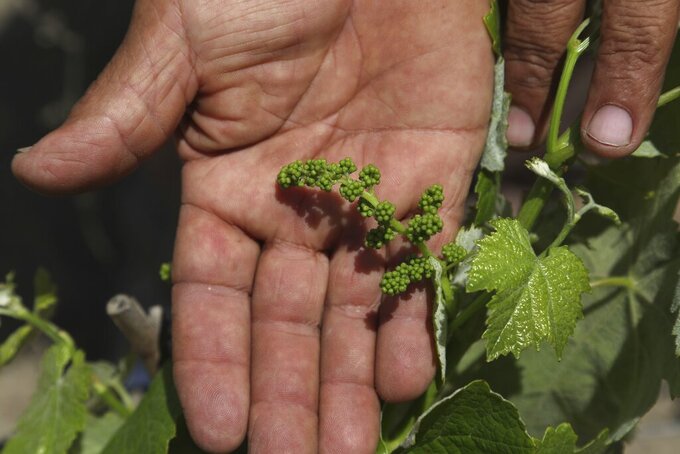 Farmer Nicanor Tasaico shows newly formed "quebranta" grapes, used to make non-aromatic or "pure" Pisco, at his vineyard in Ica, Peru, Monday, Sept. 28, 2020. More than 500 Pisco producers have seen their sales collapse by half and thousands of grape growers have had their fields ruined because of the late harvests, because of the strict lockdown implemented to stop COVID-19. (AP Photo/Martin Mejia)

ICA, Peru (AP) — In the house where for decades she has bottled pisco, the grape brandy of South America's Pacific coast, Rosa Grados has thousands of stored liters that she has not sold because of the coronavirus pandemic.

“You wait a year to get to the moment of distillation and when you are at the door, everything is cut,” said Grados, whose brand “Cholo Matías” is one of the most recognized in Peru and in 2008 was presented as a gift to 21 presidents of the Asia-Pacific Economic Cooperation forum held in Lima.

Like Grados, more than 500 pisco producers in Peru have seen their sales drop by more than 50% during the pandemic and the grape fields of thousands of farmers have been ruined by late harvests due to mandatory closures of more than 100 days that were imposed to slow the virus.

“Some could not harvest anything and those who were able to harvest received such a low price that it did not cover their expenses,” 58-year-old Grados told a team from The Associated Press as she walked among dry vines in the southern coastal Ica valley of Peru.

People have been planting grapes in the Ica valley since the 16th century, tending vineyards in an area south of Lima up to the Pacific coastline. The area enjoys year-round sunshine and, according to the farmers, produces grapes with high sugar content and low acidity, the key combination for a good pisco.

But that’s of no value these days to thousands of small farmers in the valley like Juan Tasayco, who says 2020 is the “most chaotic” and uncertain year of his life. He was unable to harvest the 11 hectares (27 acres) of grapes he planted in time and lost his entire investment of $20,000.

“The grapes have stayed in the field, the bunches have stuck to the plant,” said 60-year-old Tasayco, waving away mosquitoes around his face. The farmer said that he witnessed how some farmers also sold the grapes at 14 cents a kilo, a very low price, while others made pisco to avoid losing the entire year’s harvest to rot.

Peru was the one of the first countries in Latin America to put its economic life on hold, closing its borders and beginning a lockdown that lasted months. The blow to pisco and the liquor business in general is harder than to other industries because the government still imposes stringent restrictions on bars, gatherings at restaurants, hotels and nightlife in general.

Pisco has been immersed for years in a fierce dispute between Peru and Chile over its origin. Dozens of countries recognize pisco as both Peruvian and Chilean in origin.

According to the Chilean Office for International Economic Relations, Chilean pisco exports decreased by 21% between January and June of this year, compared to the first half of 2019.

In Peru, Rafael Zacnich, manager of economic studies at the Foreign Trade Society, said pisco exports fell 55% in the first half of the year, compared to January-June 2019. That amounts to 400,000 fewer liters exported this year.

Pisco producers, who have their stocks in storage, hope to sell them when social events are reactivated. It’s a difficult situation because pisco is not a staple product but is linked to leisure and celebration, Zacnich said.

At the La Caravedo winery, which is more than three centuries old, pisco producer Johnny Schuler says the pandemic “has had a brutal effect” on sales. The winery that produces the famous Pisco Portón has not exported even 30% of what it did in 2019.

Schuler commented that in the first half of the year, orders stopped arriving from the United States, Italy and Spain, countries hit hard by the pandemic.

“2020 was finally going to be our magic year, but it was not like that,” he said while savoring a glass of his pisco made with Quebranta grape, a variety that he grows exclusively.

La Caravedo is producing ready-to-serve, pre-mixed drinks in six varieties that also include the well-known Pisco Sour - a local cocktail of pisco and lemon juice.

A similar reality is happening at the nearby Hacienda Tacama, whose vineyard dates back to 1540 and produces wines and piscos mentioned in the writing of Nobel laureate Mario Vargas Llosa.

Manager José Olaechea says the quarantine months “have been hard” but that they have not laid off staff amid a rise in national unemployment.

The company is now producing a lower-priced brand called Mulita.

“It is a pisco that's here to bear misery and help with problems,” Olaechea said.