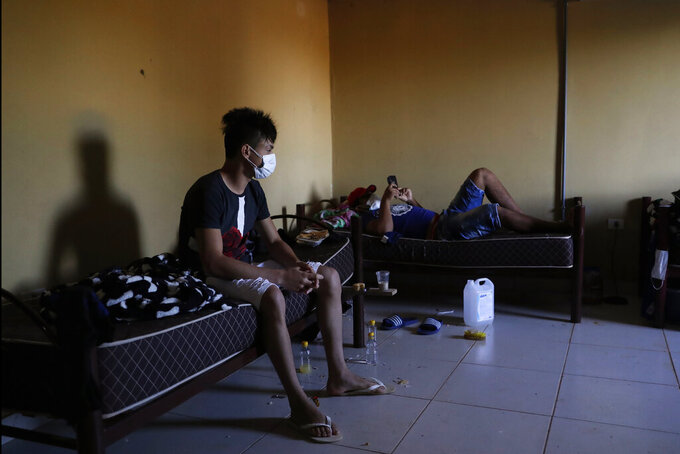 Youths rest on beds a sports facility being used as a government-run shelter where citizens returning home are required by law to quarantine for two weeks and pass two consecutive COVID-19 tests, as a preventive measure amid the COVID-19 pandemic in Hermandarias, Paraguay, near the border with Brazil, Thursday, June 24, 2020. With only 7 million people, a stagnant economy, high poverty, and a weak public health system, Paraguay moved to slow coronavirus in March by closing borders and imposing the quarantine restrictions, along with closing schools and public events and declaring a nighttime curfew. (AP Photo/Jorge Saenz) 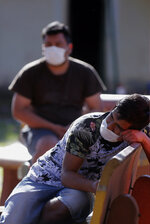 ASUNCION, Paraguay (AP) — As nearby nations grapple with uncontrolled spread of the novel coronavirus, the poor, landlocked nation of Paraguay appears to be controlling the disease, with just a few thousand confirmed cases and a few dozen deaths.

Along with Paraguay's relative isolation, experts credit the country with creating a network of quarantine centers in military academies, motels, and religious institutions where citizens arriving home must isolate for at least 14 days and pass two consecutive coronavirus tests before being able to move about the country freely.

With only 7 million people, a stagnant economy, high poverty and a weak public health system, Paraguay moved to slow coronavirus in March by closing borders and imposing the quarantine restrictions, along with closing schools and public events and declaring a nighttime curfew.

Some 8,500 have passed through the quarantine system already, some complaining about poor food and housing and the requirements that the 14-day clock starts again for everyone in a shelter if one person tests positive for the coronavirus. There are also complaints of delays from many of the 15,000 Paraguayans still waiting outside the country in neighboring nations like Brazil and Argentina.

“It was a horrible experience the entire time,” said a 21-year-old who insisted on speaking anonymously out of fear of being discriminated against for having been infected. “There were 100 men together in my (quarantine) center, of all ages. When I arrived home my mother was excited to see me but didn't touch me. She first disinfected me all over with alcohol and a home remedy. I bathed and only then did she hug me.”

Paraguay built two hospitals to handle a possible surge in coronavirus cases, but a recent visit by an Associated Press journalist showed both are empty, which authorities cited as evidence of their success in slowing the spread of the virus.

“Striking a balance is a great challenge for the government,′ presidential adviser Federico González said. “The shelters are full and the population is safe.″

Observers worry, however, that the uncontrolled surge of cases in Brazil, many close to Paraguay's border, means the smaller country's success may be short-lived.

Adding to concerns are a predicted 5% drop in gross domestic product for an economy that was already struggling, and a health system that remains unprepared for a large-scale epidemic.

“I think the government’s measures have been the right ones,″ said leftist Sen. Esperanza Martínez, a former health minister. “The problem is that they haven't been accompanied by longer-term solutions ... I think we're going to have problems in the next months that it will be hard to reverse, and the health system isn't prepared."