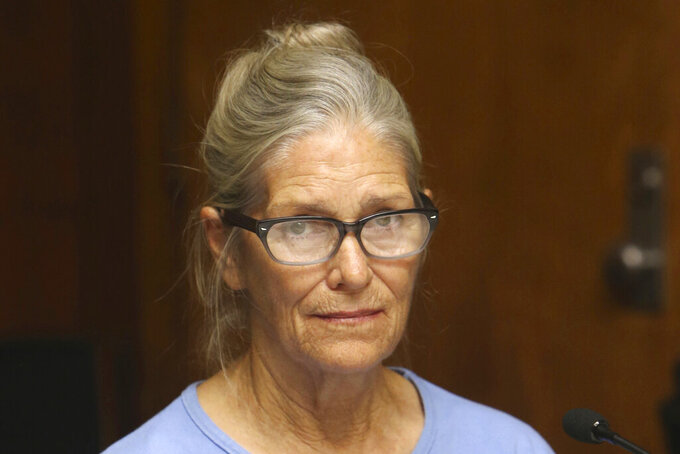 FILE - In this Sept. 6, 2017, file photo, is Leslie Van Houten at her parole hearing at the California Institution for Women in Corona, Calif. A California panel has recommended parole for Charles Manson follower Van Houten, who has spent nearly five decades in prison. The recommendation was made Thursday, July 23, 2020, although Gov. Gavin Newsom could decide to deny it. (Stan Lim/Los Angeles Daily News via AP, Pool, File)

After a hearing at the women’s prison in Chino, California, commissioners of the Board of Parole Hearings found for the fourth time that Van Houten was suitable for release, according to the state Department of Corrections and Rehabilitation.

After a 120-day review process, her case will again rest with California Gov. Gavin Newsom, who could deny parole, although that move could be challenged in court.

Newsom blocked her release once and his predecessor Jerry Brown did it twice.

“As with any parole suitability recommendation, when the case reaches the Governor’s Office, it will be carefully reviewed on its merits," Vicky Waters, Newsom's press secretary, said in a statement.

Van Houten, 70, is serving a life sentence for helping Manson and others kill Los Angeles grocer Leno LaBianca and his wife, Rosemary, in August 1969.

Van Houten was 19 when she and other cult members fatally stabbed the LaBiancas, carved up Leno LaBianca’s body and smeared the couple’s blood on the walls.

The slayings came the day after other Manson followers, not including Van Houten, killed pregnant actress Sharon Tate and four others.

Details of the parole hearing weren't immediately released but Van Houten’s attorney, Rich Pfeiffer, said in an email that it “went really well.”

Pfeiffer said he expects Newsom to reverse the decision again, “but the courts will have a harder time denying a writ than they did in the past.”

In May, an appeals court denied Pfeiffer's request to release Van Houten on bail or her own recognizance. His motion argued that her age put her at high risk of contracting COVID-19 and noted that another prisoner in her housing unit had been infected.

At her 2017 parole hearing, Van Houten described a troubled childhood. She said she was devastated when her parents divorced when she was 14. Soon after, she said, she began hanging out with her school’s outcast crowd and using drugs. When she was 17, she and her boyfriend ran away to San Francisco’s Haight-Ashbury District during the city’s Summer of Love.

She was traveling up and down the California coast when acquaintances led her to Manson. He was holed up at an abandoned movie ranch on the outskirts of Los Angeles where he had recruited what he called a “family” to survive what he insisted would be a race war he would launch by committing a series of random, horrifying murders.

Manson died in 2017 of natural causes at a California hospital while serving a life sentence.