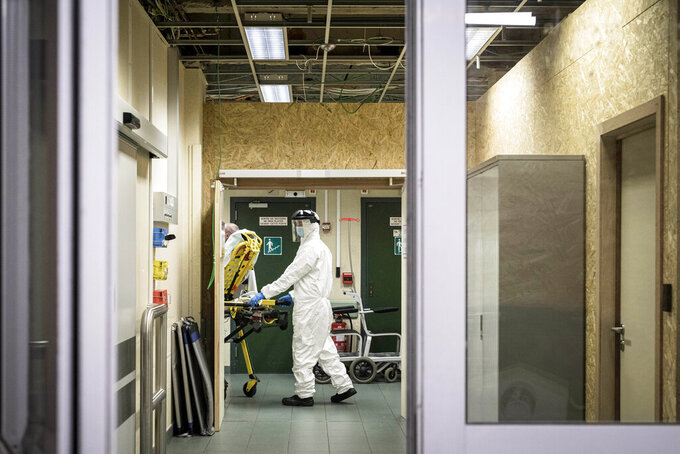 A member of medical staff wheels a patient on a bed as he arrives at the CHR CItadelle hospital in Liege, Belgium, Thursday, Oct. 29, 2020. Belgium has announced restrictive measures across the country in an effort to curb the fast-rising tide of COVID-19, coronavirus cases. (AP Photo/Valentin Bianchi)

BUIZINGEN, Belgium (AP) — Belgium has imposed a partial lockdown in a new bid to gain control of the pandemic that has hit the country worse than any other in the European Union.

As COVID-19 infections continued their record rise on Friday, the government moved to restrict travel and shopping. Family contact will also be reduced to an absolute minimum of one outside the closest cluster for the next 6 weeks. Remote work will be mandatory.

Hospitals and experts have long complained that Belgium's measures were too lax over the summer, when the pandemic eased, and warned recently that unless there was a drastic lockdown the nation's once-vaunted health system would soon face breaking point.

“We are going towards a reinforced confinement with only one goal: avoiding that health care services collapse," said Prime Minister Alexander De Croo, as he announced the measures. “It is now in our hands, it is in your hands. These really are the last-chance measures and it is up to all of us to make sure that these measures produce a result.”

The European Center for Disease Prevention and Control on Friday ranked Belgium as the worst affected nation in the 27-nation bloc, with 1,600 cases per 100,000 people. Hotspots like Spain and Italy have less than a third of that total, highlighting how acute the crisis is.

France, with proportionally fewer than half the cases, announced a second, full nationwide lockdown Wednesday. Belgium, however, will still allow people to travel to their hotel or secondary residence, often on the coast or in the verdant Ardennes hills.

The one-week school vacation which started Friday will be extended for an extra week.

“Unfortunately, we cannot yet see the long-expected turnaround in figures,” said virologist Steven Van Gucht. He said that the true total of infections is higher than reported because testing has been reduced for specific categories of people.

Patients in intensive care units reached 1,057 from 993 the day earlier, and virologists have warned that unless tougher measures have a quick impact the saturation point of 2,000 patients will be reached on Nov. 6.