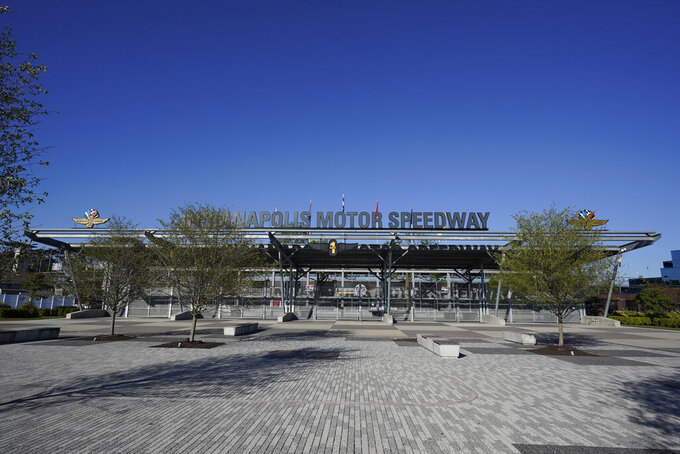 The entrance to the Indianapolis Motor Speedway is empty of fans, Thursday, Aug. 20, 2020, in Indianapolis. (AP Photo/Darron Cummings)

INDIANAPOLIS (AP) — It was the saddest Carb Day in Indianapolis 500 history. The Snake Pit sat silent in the empty infield, no sign of any rowdy revelers who turn an important day at the track into Indiana's biggest party.

The annual “Carburetion Day” began as a critical on-track session of Indy 500 prep as teams adjusted the carburetors of their gasoline-powered engines. There hasn't been a carburetor on an Indy car since 1963, but Carb Day is part of Indy 500 lore and so it stays.

The current version of Carb Day is the final practice session before Sunday's race, but it has grown into a full-day celebration. Practice was just an appetizer to an always thrilling Freedom 100 Indy Lights race, the popular pit crew competition and driver interviews for those roaming the packed midway.

It always concluded with a concert in the Snake Pit, and this year world-renowned DJ Martin Garrix was scheduled to headline an electric dance music show. Carb Day is supposed to open a huge holiday weekend that ends with the biggest race in the world.

In 2020, Carb Day was little more than a two-hour Friday practice session three months after the usual Memorial Day holiday weekend so familiar to the race. Spectators are not permitted at Indianapolis Motor Speedway this year because of the coronavirus pandemic, so all the ancillary fluff that patrons have participated in over several generations has been stripped from the event.

The only entertainment was 33 drivers shaking down their cars in a final tune-up. It was the first session in which pole-sitter Marco Andretti did not dazzle; he ended 28th on the speed chart.

Andretti is hoping to end a family curse that dates to grandfather Mario's 1969 victory and said Friday was a test of what the team should not do during the race.

“I’d rather learn that today than on Sunday,” Andretti said.

As for the strange vibe at the empty speedway, Andretti said the drivers won't complain and credited new track owner Roger Penske for not canceling the event.

“He’s taken a lot of hits in the business part of this, so we know we are luck to be racing here,” Andretti said.

Pato O'Ward of Arrow McLaren SP was fastest on Carb Day in a Chevrolet, followed by a trio of Honda's driven by former Indy 500 winners. Scott Dixon was second fastest, then Alexander Rossi and finally Takuma Sato.

Chevrolet — specifically Team Penske — has won the last two Indy 500's will Will Power and Simon Pagenaud. It was Penske teammate Josef Newgarden who led the group Friday at seventh fastest.

Newgarden earlier this week was hit with an eye infection that he had treated in time for a trouble-free Carb Day.

“Kind of scared me pretty good,” Newgarden said. “But I got it all sorted out. Got some antibiotic drops. I’m good now.”

O'Ward, after his first day atop the speed charts, noted he was simply getting comfortable before his first Indy 500.

“Just feeling out practice and everything, it’s so important to have a car that’s able to follow closely and be able to get runs on people, ultimately move forward instead of moving backward,” O'Ward said. “I think today was a good step forward. We’re just going to have to kind of go with our gut and hope this works like it did today in a race day on Sunday.”