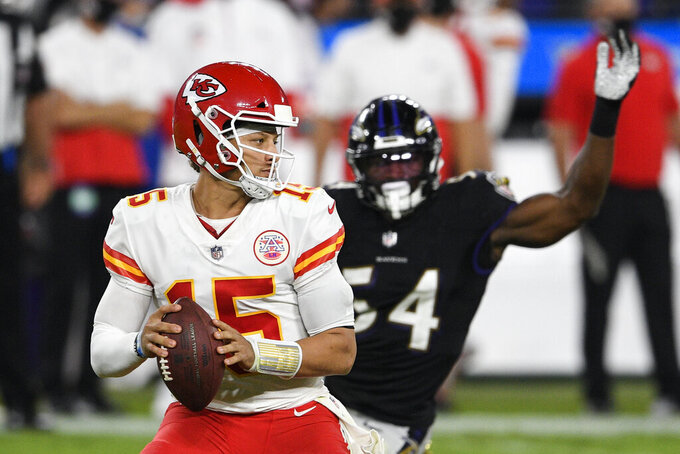 KANSAS CITY, Mo. (AP) — The Patriots-Chiefs game has been postponed until Monday or Tuesday due to positive coronavirus tests.

Patriots quarterback Cam Newton and Chiefs practice squad quarterback Jordan Ta'amu are so far the only ones to return positive tests, but both teams are doing additional screening. In the mean time, the Chiefs shut down their facility Saturday and are looking ahead to playing their showdown with the Patriots in a couple of days.

“It's a pandemic, so things can happen,” Chiefs coach Andy Reid said this week, when news emerged from Tennessee about an outbreak with the Titans, which has forced their game against Pittsburgh to be postponed. "But you've got to take as many precautionary measures as you can and try to stick with them, and if something happens like that, then you’ve got to work through that. We’ve all been coached up on it, and we’re all trying to do the best we possibly can with it.”

The Patriots had planned to visit Arrowhead Stadium behind a quarterback who can run at any time and a backfield that ran roughshod over the Raiders last weekend. But now the Patriots will likely go with Brian Hoyer or Jarrett Stidham, which should be good news to a Chiefs team that has historically struggled against the run.

The Patriots still have plenty of threats in the backfield. Sony Michel needed just nine carries to pile up 117 yards, Rex Burkhead reached the end zone three times and the Patriots totaled 250 yards rushing in their win over Las Vegas.

Now, the first order of business any week may be to stop the run — something the Chiefs (3-0) did quite well against the Ravens on Monday night. But the challenge is even more important when the Patriots (2-1) have shown such a propensity for grinding out yards on the ground. They lead the league in rushing through the first three weeks.

The Chiefs are 27th at defending the run.

The Patriots also hope their running game allows them to control the clock, shortening the game and thereby keeping record-setting quarterback Patrick Mahomes and the dynamic Chiefs offense off the field.

“Ball control and points. You know that,” Patriots running backs coach Ivan Fears said. “Let's get the points and let's control the ball; I don't care how we do it. Dink-and-dunk, quarterback sneak, I don't give a (darn). Just get it done.”

They have a lot of guys who can get it done, too. Michel and Burkhead are a considerable backfield tandem, but undrafted rookie J.J. Taylor also has gotten into the mix. James White was back at practice this week after the death of his father in an auto accident, as was Damien Harris, who has been on injured reserve with a finger problem.

“We’re a bunch of competitors," Taylor said, “but we also want to see each other succeed.”

The Patriots will need them to against the Chiefs.

CAM AND GET IT

Newton would have been the fourth straight quarterback the Chiefs have prepared for that can run. They faced the Texans' Deshaun Watson in the opener, then prepared for the Chargers' Tyrod Taylor in Week 2, though he was ruled out shortly before kickoff because of a medical mishap. Then came the Ravens' Lamar Jackson last week.

But if Newton can't play, either the more pro-style Hoyer or untested second-year QB (backslash)Stidham will go.

The Chiefs will be without rookie cornerback L'Jarius Sneed, who has two picks through his first three games, but who had surgery this week on the collarbone he broke Monday night in Baltimore. They also could be without Chris Jones, who came into the week leading the AFC with 3 1/2 sacks, because of a groin injury. Top cornerback Bashaud Breeland remains out while serving the final game of his four-game suspension for violating the NFL's substance-abuse policy.

The reigning Super Bowl MVP continues to have an unforgettable a year. He led the Chiefs to their first title in 50 years, signed a long-term deal that could pay him a half-billion dollars, got engaged to his long-time girlfriend and this week announced the couple is going to have a baby. Oh, and he's also started the season by throwing for nearly 300 yards per game with nine touchdown passes, another touchdown on the ground and no interceptions.

“I mean, all the superlatives that have been said about him, I'd just be repeating them all," Patriots coach Bill Belichick said.

While the biggest challenge facing the Chiefs may be stopping the run, the biggest facing the Patriots will be covering their fleet of pass catchers. Tyreek Hill and Sammy Watkins are merely the start of the headaches — fellow wide receivers Mecole Hardman and Demarcus Robinson, tight end Travis Kelce and running back Clyde Edwards-Helaire are all threats.

“They have five good receivers out there on almost every play,” Belichick said, “so it’s hard to match up with two, three or four of them, but they’ve got five and a great quarterback and a great offensive system. They maximize the amount of pressure they put on you and they do a lot of different things."

The Chiefs will welcome about 17,000 fans to Arrowhead Stadium on Sunday. It's the 22% of capacity that they were allowed for their Week 1 win over Houston, but welcome news after empty stands on visits to the Chargers and Ravens.