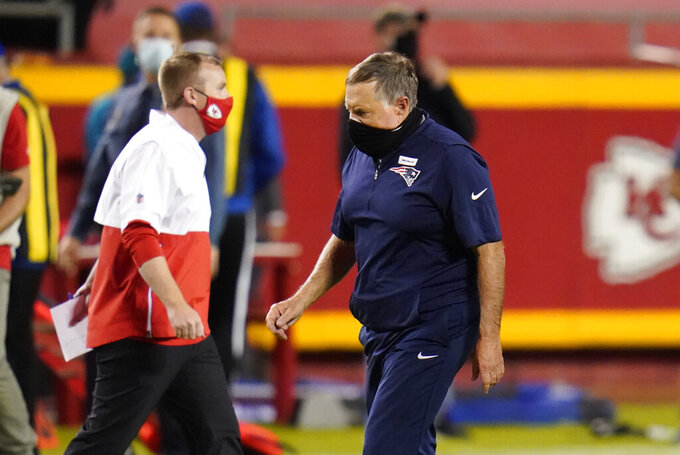 FOXBOROUGH, Mass. (AP) — The Patriots anticipated having some offensive limitations without starting quarterback Cam Newton in the lineup against the defending champion Chiefs.

It turned out to be worse than expected.

A whirlwind week for New England that included Newton being sidelined after testing positive for COVID-19 and having its game pushed back a day, ended with several missteps on the field during a 26-10 loss to Kansas City on Monday.

The Patriots now trudge into a shorter week than expected facing lingering questions with Newton likely out again for Sunday’s matchup against Denver. In addition to Newton's positive test, practice squad defensive tackle Bill Murray was placed on the COVID-19 reserve list Tuesday. But it's unknown if Murray, a 2020 undrafted free agent out of William & Mary, also tested positive or was simply in close contact with a symptomatic person.

Making his first start as a Patriot after twice serving as Tom Brady’s backup, Brian Hoyer was pulled in favor of Jarrett Stidham late in the third quarter after two crucial mistakes that prevented New England from scoring. For the game, Hoyer was 15 of 24 for 130 yards with an interception and fumble.

Stidham initially flourished and had a touchdown pass to N’Keal Harry. But he had two turnovers — both interceptions — ending any hopes of a New England comeback. Still, as the week begins, Stidham looks to be firmly back in the competition to get the starting nod against the Broncos.

“I definitely think as a competitor you want to be suiting up and on the field every single game. I’ve just been controlling what I can control,” Stidham said. “Going further down the road here I’m just gonna continue to get better ... and really focus on what I can do to help the team out in whatever fashion that may be.

“Things can happen in a weird way. Obviously, I want Cam to get better and have him back in the room as soon as possible.”

How fast Newton will be available will depend on whether he’s been exhibiting symptoms since his positive coronavirus test on Friday. But both scenarios will likely keep him out for at least one more game.

According to the NFL’s protocols for players who test positive, those showing symptoms can’t return until 10 days from when their symptoms first appeared and at least 72 hours have passed since their last symptoms occurred. That at a minimum would mean Newton couldn’t rejoin the team until Oct. 13.

If he is asymptomatic, there’s a chance he could return in as few as five days if he has two consecutive negative tests 24 hours apart.

In that instance Newton could be back with the team as early as Thursday. But that would leave only three days before the Patriots hosted the Broncos.

Though the Chiefs found some traction in the second half, the Patriots’ defense was able to get some pressure on Patrick Mahomes in the first two quarters, limiting Kansas City to six points. Linebacker Ja’Whaun Bentley was particularly active, leading the team with six tackles. Chase Winovich also had four tackles and his second sack of the season.

If the Patriots’ offense is going to look any better this week, it will start with taking care of the ball. New England's four turnovers were its most since it had five in a 33-10 Week 13 loss to Pittsburgh in 2008.

Running back Damien Harris has been waiting to play meaningful minutes for two seasons. He began the season on injured reserve with a hand issue, but made the most of his first action in 2020, rushing 17 times for 100 yards. It’s a positive sign with Sony Michel going on IR (quad) and as it looks for ways to move the ball if Newton remains sidelined.

By contrast, after serving entirely in a backup capacity during his first two stints in New England, Hoyer’s first opportunity to be the Patriots’ starting quarterback is not one he’ll want to re-live. He overthrew receivers and his poor decision-making in the pocket twice cost his team valuable points.

The offensive line now suddenly has several issues to address. In addition to starting center David Andrews, who must be on IR for at least another week, starting right guard Shaq Mason sat out Monday’s loss with a calf injury. In addition, right tackle Jermaine Eluemunor left the game with a migraine.

43.8 — The combined quarterback rating for Hoyer and Stidham against the Chiefs.

The offense will be in the spotlight all week. Assuming Newton is out, the coaching staff will need to decide quickly on a starter and try to tailor a game plan that plays to their strengths better than it did against Kansas City.