Patriots' Newton knows he has much to prove this season 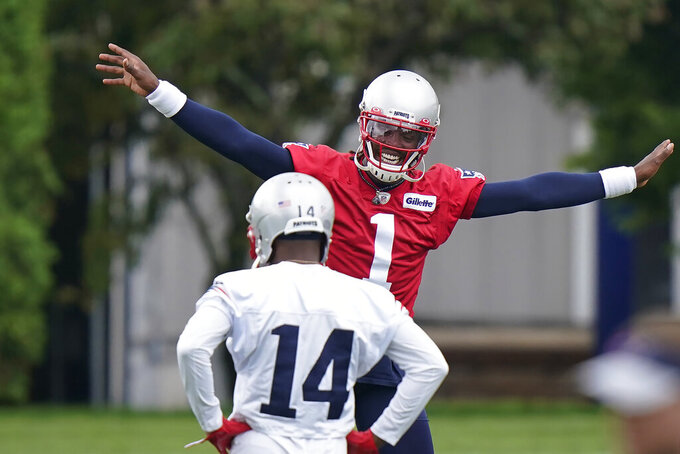 FOXBOROUGH, Mass. (AP) — Call it a mantra. Call it a simple reminder. But Cam Newton has a note he has been reminding himself of every day since last season.

“Pre-snap comfort will help post-snap results for me,” Newton said of what he repeats to himself daily.

That’s because for Newton, back with the Patriots on a one-year deal, the coming season is all about him wholeheartedly embracing a second chance to make the impression he feels he was never fully equipped to make in 2020.

Newton didn’t reach terms on his original one-year deal with New England until late June last year, missing much of an offseason program that was truncated even more because of COVID-19 and teams having limited access to their facilities.

The result was a disappointing season in which Newton went just 7-8 as the starting quarterback with the unenviable task of succeeding Tom Brady following his departure to Tampa Bay.

Along the way he missed time after a COVID-19 diagnosis and dealt with mechanical problems and consistency in the passing game as he struggled at times to lead an offense he was still mostly learning on the fly.

He said he feels “grateful” to get another crack at perfecting it.

“(Offensive coordinator Josh McDaniels’) system was something that has worked for decades and decades. So, for me, it was up to me to kind of learn it as much as possible,” Newton said. “In the latter part of the season, it just caught up to me. I was thinking too much, I was trying to be something, when it just wasn’t enough hours in the day, you know what I’m saying?”

This time around, Newton is vowing to do his part to ensure that time won’t be the impediment to improvement.

He organized workouts with members of the returning receiving corps as well as free agent additions Jonnu Smith, Hunter Henry, Nelson Agholor and Kendrick Bourne. Newton attended all but three of New England’s recent voluntary offseason workouts. The exceptions were the three he missed because of a hand injury, from which he has since recovered.

Bourne said recently that Newton’s energy during workouts was infectious.

“It’s just awesome to be around a guy that kind matches energy like me. Whenever I get down or something, he’s there to pick me up. He’s that kind of guy,” Bourne said. “And when I do good he’s there too to push me and motivate me at the same time. So he’s just all-around a great teammate.”

Coach Bill Belichick said before the draft that Newton was the Patriots' starting quarterback. He has reiterated that point even after the team drafted Mac Jones in the first round in April.

“Cam’s way ahead of where he was last year at this time, there’s no question about that,” Belichick said. “As you would expect, he has a good year of experience under his belt, he’s able to start the process at the beginning and not be in a catch-up mode like he was last year.”

Newton said he had no problem with Jones' selection, saying “you still have to do what’s right for the organization, for the long haul.”

He instead is focusing his energy on finding new benefits from having a full offseason.

“It’s still helping me,” he said. “It’s just about learning as much as possible and not only just doing the things that you’re asked to do but also going it a step further to try to master what is being taught.”

Will he be playing with any extra incentive this season?

“Double duh,” he said with a laugh. “It’s only 32 guys in the world that can say they are a starting quarterback in this league. … I have a job and responsibility to myself to hold myself to a standard that I know I have to play at. … ‘My faults’, ‘my bads’, ‘I am going to get them next time’ — those are slowly but surely being flushed out of my vernacular. And just the expectation of getting back to the standard of the Patriot way is important for me to uphold.”

NOTES: Linebacker Dont’a Hightower said he had no intention of retiring before last season and that his decision to opt out was solely out of concern for his family. Hightower, whose wife gave birth to their first child last year, was one of several Patriots to sit out 2020 over COVID-19 concerns. He is entering the final season of his four-year, $35.5 million deal and said reports about him considering retirement were unfounded. “All those rumors about retirement and stuff, y'all had me thinking someone was trying to kick me out,” he said.