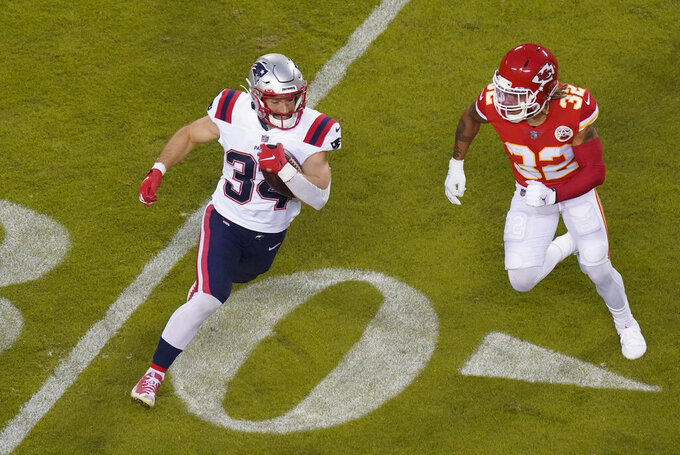 Newton is expected to practice with the team on Thursday, which likely would lead to his starting on Sunday against Denver.

New England players say they have found an ally in coach Bill Belichick amid growing local criticism of the NFL’s handling of the COVID-19 pandemic.

Belichick’s approach to the virus outbreak within the walls of Gillette Stadium has earned him praise from those in the Patriots’ locker room as they navigate the stops and re-starts of this unusual NFL season.

“Bill has done a good job of (saying), ‘Hey, this is forever kind of changing, it’s very fluid,’” Patriots safety Devin McCourty said. “But once we get it, (he says) ‘This is what we’ve got, this is what we’re gonna do,’ and I think all of us have just kind of (fallen) in line.”

New England players returned to the team’s facilities on Wednesday for the first time since participating in a walk-through Saturday to prepare for their now twice-postponed game against Denver. After a fourth positive COVID-19 test last Sunday, the NFL rescheduled the game with the Broncos — originally set for Sunday, but bumped to Monday after a handful of positive tests last week — to this coming Sunday.

Devin’s brother, Patriots cornerback Jason McCourty, was among those who voiced their displeasure with the league and its players’ union last week, claiming “they don’t care” about the well-being of players over profit.

“When he speaks, it’s from talking to a lot of different people — obviously with the (players association), but I would say most importantly the guys in our locker room,” Devin McCourty said.

He added, “I think the biggest thing he said was the guys in the locker room, the guys in the organization, coaches, players — that’s what it’s about. It’s us keeping each other safe. It’s hard to imagine people outside of our building are gonna care more about our safety. I think that’s just a common sense thought.”

New England’s facilities were shut down last week from Wednesday through Friday, and another positive test kept the team away until this Wednesday, when players were allowed to return in limited numbers for workouts.

“Knowing that tomorrow was unknown as to when we would get back, it’s a challenge — but I think that’s just all about being a pro,” safety Adrian Phillips said. “When you get to the league … you’re gonna have some obstacles that you have to overcome, and this is just one of those obstacles.”

As football plans remain in flux, Belichick has continued to make his players a priority, his players say.

“He’s been great,” running back Rex Burkhead said. “He really has just put our safety, our family’s safety first, and he’s been in constant communication with us on doing whatever he can or whatever the team can to put in things in place to keep us safe.”

In what was originally set as their bye week, the Patriots plan to hold their first practice on Thursday, barring additional virus-related setbacks.

“With this season, you had an understanding from the get-go that things can constantly change. Anything could happen,” Burkhead said. “So my mindset was kind of just stay here, do what I can to prepare myself mentally, physically, whenever our game was going to be played.”

For now, the Patriots and Broncos are expecting that day to be Sunday.

“We’re all dealing with the same thing with everything that’s going on in this world,” left tackle Isaiah Wynn said. “You’ve just got to keep focusing, keep looking forward to the task at hand, which is the Broncos. We’re just full-fledged and focused on that.”