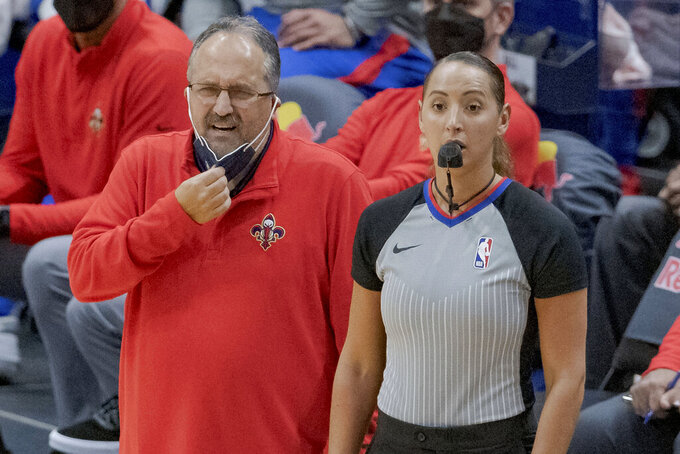 Some players and other members of the New Orleans Pelicans organization have received their first dose of COVID-19 vaccinations, following changes in the eligibility standards for Louisiana residents.

The Pelicans said the vaccines were administered Saturday, though they did not disclose who got them. They are the first NBA team to acknowledge a widescale receipt of the vaccine by members of a club.

The team said it was supporting “the state's vital efforts" to encourage residents to get vaccinated, and Pelicans coach Stan Van Gundy said he'd like his team to be an example.

“In my opinion, the more people we can encourage to get vaccinated, the better off all of us are going to be," Van Gundy said. “It seems to me it's really our only way to get past this whole experience with COVID and be able to open up more and to keep people safe."

State officials in Louisiana expanded the list of those who may receive the vaccine last week “to include people who have health conditions that may result in a higher risk of disease” and are over the age of 18. Among the higher risk groups: those with a body mass index of 25 or more, which would technically classify them as overweight.

Many of the Pelicans’ players fall into that category, despite being NBA players and elite athletes.

Thornwell is listed at 6-foot-4 and 215 pounds, which would give him a BMI of 26.2 — and therefore make him eligible for the vaccine, even though he is in outstanding physical condition.

The NBA has no issue with the Pelicans receiving the vaccine because state guidelines were followed. NBA Commissioner Adam Silver has said repeatedly that the league and its teams would not “jump the line” and get vaccines before they are eligible to do so.

“League policy requires teams to follow their state’s vaccination guidelines and programs and we are fully supportive of players and team staff being vaccinated when they are eligible,” an NBA spokesperson said in a statement.

“And we did that," Van Gundy said. “I think it's good. Hopefully, we can participate in promoting people getting the vaccine when it's available to them, because I think it's our way out of this whole thing."

Some NBA coaches, San Antonio’s Gregg Popovich among them, previously received the vaccine. Popovich is 72, which means he has met the Centers for Disease Control and Prevention’s age recommendation standards to prioritize people over 65 from the outset of the vaccine rollout process.

Other states have made similar changes to rules in the last several days as vaccines become more readily available, just as Louisiana did. The NBA has been holding Zoom calls with teams for the past several weeks, educating players and staffers on the vaccine.

“I think ultimately these are personal decisions that players need to make, just like everyone in our communities need to make,” Silver said at the All-Star Game in Atlanta earlier this month. “We see our role, together with the Players Association, as providing them with the best possible information, and also encouraging them to seek out information on their own. They have personal physicians, others they may rely on.”

Silver said at that news conference that he was unaware of any player being vaccinated at that point. The NBA, however, has told teams and players that once completely vaccinated, they would no longer risk having to miss games and quarantine if they are flagged as a close contact of someone who has tested positive for COVID-19.

“Many of our players have had to sit out not because they tested positive but because they were required to quarantine because of a close contact,” Silver said.

Experts have noted that Black Americans were getting inoculated at levels below their share of the general population since the vaccines began rolling out, for several reasons — including deep distrust of the medical establishment because of a history of discriminatory treatment.

“We need to understand where that comes from,” Van Gundy said. “As a government, as an establishment, we’ve done some pretty bad things. And so, over time, there’s people out there who remember experiments and things done on people of color without their consent. And there’s not a trust level. ... Whether we agree with that or not, you have to understand it.”

The league has had about 100 players test positive this season — 48 of those in the week before the start of training camp — and has had to reschedule 31 games so far this season for virus-related reasons, such as positive tests and contact tracing keeping teams from having enough players to take the floor.

Not all players have publicly said they will receive the vaccine when it becomes available in their communities. Los Angeles Lakers forward LeBron James said during All-Star weekend he would make the decision with his family and “keep that to a private thing.”