Pelosi, McConnell get COVID-19 vaccine, urge others to do so 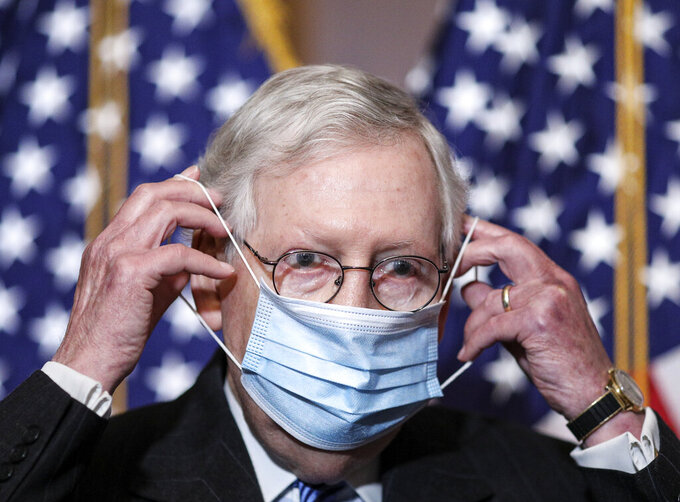 Senate Majority Leader Mitch McConnell of Ky., removes his face mask as he arrives for a news conference with other Senate Republicans on Capitol Hill in Washington, Tuesday, Dec. 15, 2020. (Tom Brenner/Pool via AP)

WASHINGTON (AP) — The legislative branch of government is rapidly moving to receive the coronavirus vaccine, with both House Speaker Nancy Pelosi and Senate Majority Leader Mitch McConnell getting the shot on Friday and the top Capitol doctor urging all members of Congress to join them.

Both Pelosi and McConnell tweeted photos of themselves receiving the vaccine from the Capitol physician, Dr. Brian P. Monahan. Monahan informed lawmakers Thursday evening that they are all eligible for the shots under government continuity guidelines and asked members of the House and Senate to make appointments with his office to be vaccinated.

The leaders' vaccinations came hours after Vice President Mike Pence received it on live television and called it a “medical miracle." The public displays from all three come as top U.S. health officials are trying to convince regular Americans who may be skeptical of the vaccinations to get them and allow the country to rebound from the pandemic.

“Today, with confidence in science & at the direction of the Office of the Attending Physician, I received the COVID-19 vaccine,” Pelosi tweeted. “As the vaccine is being distributed, we must all continue mask wearing, social distancing & other science-based steps to save lives & crush the virus.”

The speaker said in October that she does not like getting shots and even had a hard time getting her ears pieced.

“They have to talk me into the flu shot under great duress each year," she said. "But if it serves as a model to other people, yes, I would take the vaccine if it is approved by regular order.”

McConnell tweeted that he had “just received the safe, effective COVID vaccine following continuity-of-government protocols. Vaccines are how we beat this virus.”

On Thursday, McConnell said that as a survivor of childhood polio, “I know both the fear of a disease and the extraordinary promise of hope that vaccines bring.”

It is unclear whether all 535 members of the House and Senate will choose to get the vaccine. Only about half of Americans say they are willing to get it, according to a survey this month by The Associated Press-NORC Center for Public Affairs Research, despite a rigorous federal review process and health officials' insistence that it is safe.

Several other members of Congress have expressed an eagerness to receive the vaccine, especially as an example to some of their constituents who may be wary. House Republican Leader Kevin McCarthy said Friday that he would also be getting the shot.

Two senators, Rob Portman, R-Ohio, and Steve Daines, R-Mont., have been participating in the vaccine trials. But lawmakers are also reluctant to be first to be vaccinated so they’re not seen as jumping the line.

Pelosi is third in the line of succession for the presidency, after President Donald Trump and Pence. Trump, who was hospitalized with COVID-19 in October, has yet to indicate when or if he will receive the shot.

Monahan, the Capitol physician, said that his office will follow a process to identify “continuity-essential staff members” in Congress after members have been vaccinated. He said his office would continue with appointments “until the small vaccine supply is exhausted.”