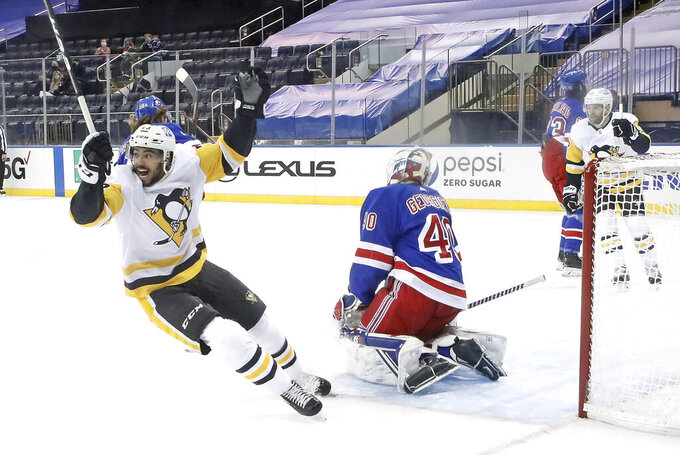 Getting some unexpected time off after a COVID-19 outbreak among the New Jersey Devils forced their visit to Pittsburgh this week to be postponed is less than ideal. Then again, Crosby is well aware that nothing in a pandemic is ideal, so the Penguins will adapt on the fly and see how it goes.

The break gives Pittsburgh a chance to catch its breath following a whirlwind stretch both on the ice and off. The season's first three weeks have brought the abrupt resignation of general manager Jim Rutherford, a steady stream of defensemen to the injured list and now the first of what could very well be multiple COVID-19 interruptions.

Crosby admitted it's rare to have so much “bunched together" but believes the Penguins — who are 5-4-1 — have done a decent job of navigating things. Pittsburgh put together a five-game point streak last month despite falling behind in each contest and using a revolving door along the blue line thanks to injuries to regulars Marcus Pettersson, Juusso Riikola, Brian Dumoulin and Kris Letang.

“Being down, trailing many times, being able to get back, it shows a lot of character, especially early in the season,” Crosby said. "I think that’s a positive sign.”

Coach Mike Sullivan has stressed to his players to “control the controllables” while allowing there are circumstances at play over which the Penguins have no say at all. The postponements this week were due to what happened in New Jersey, not Pittsburgh. A blizzard prevented the Penguins from returning home on Monday night, forcing them to practice at Madison Square Garden on Tuesday.

The postponements mean the Penguins won't play again until they visit the New York Islanders on Saturday. Having an extended break in a year when so many games are crammed together is unusual. Then again, what isn't?

“I think just from a sheer mindset standpoint, it’s not anything our guys or our coaching staff aren’t prepared for,” Sullivan said. "We have to expect inconvenience. We’ve got to expect uncontrollable circumstances are going to come our way and respond accordingly.”

The goal this week is to use the extended break to work on early issues, including a power-play that is struggling to develop any sense of rhythm. The Penguins are 23rd in the league, converting 13.9% of their opportunities with the man advantage. Not exactly what they had in mind when they brought back former assistant Todd Reirden in the offseason to work with a group that includes some of the better playmakers in the league in Crosby, Evgeni Maklin and Jake Guentzel.

Of course, that's part of the problem. Sulliivan has been fighting a tug of war with his stars for the better part of his five-plus years on the bench. Too often they try for the pretty play instead of the simple one, a mindset that leads to fewer pucks on net and fewer opportunities for rebounds that could end up over the goal line.

“Players can have a tendency to think too much,” Sullivan said. “If you look at the personnel group we have, they’re at their best when they’re instinctive."

Meaning, when they're reacting and not overthinking things. It's a delicate balance given the group's respective talent level, but one Sullivan knows the Penguins need to find as they try to stay in the thick of what figures to be a highly competitive East Division race.

“I think as far as what we can work on after 10 games (are) special teams and just generating a little bit more offensively,” Crosby said. “It comes down to execution when you get chances and just making sure you’re doing it consistently.”