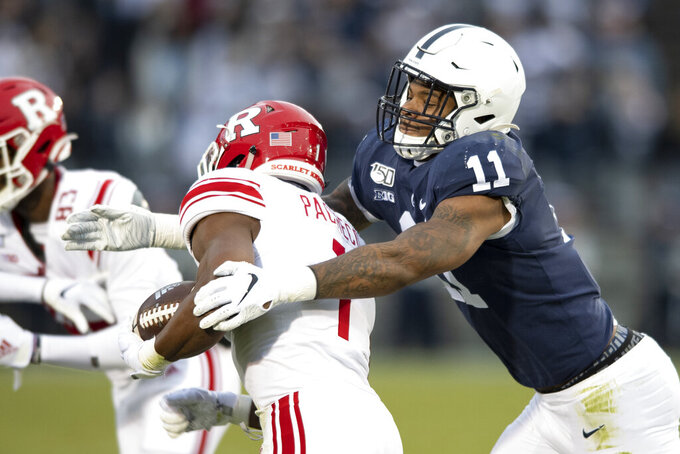 Penn State All-American Micah Parsons and two more college stars announced Thursday they are opting out of the coming college football season, which is in doubt because of the coronavirus pandemic, and looking toward the NFL draft.

Parsons made his announcement with a social media pos t as did Purdue receiver Rondale Moore a few hours later. The news about Miami defensive end Gregory Rousseau was delivered by Hurricanes coach Manny Diaz, who found out about his sack leader skipping the season during a conference call with reporters.

All three will be eligible to the 2021 NFL draft. Parsons was already expected to be high first-round selection. Rousseau and Moore also have first-round potential

The three join Virginia Tech cornerback Caleb Farley and Minnesota receiver Rashod Bateman as prominent college players who have decided to sit out the season and concentrate on preparing for professional careers.

Parsons, 6-foot-3 and 245 pounds, led the Nittany Lions with 109 tackles, and had 14 tackles for loss and five sacks as a sophomore last season. He ended his college career with maybe his best game. In a Cotton Bowl victory against Memphis, Parsons had 14 tackles, two sacks and two forced fumbles.

“As I consider all my options for the 2020 season, I decided I needed to make a choice not for myself, but for my son and those nearest to me,” Parsons said in a video released on Instagram. “While I felt safe with the safety standards to return to Penn State for workouts, the potential risk to the health and well-being of my son far outweighed my urge to play football this season.”

Rousseau was second in the nation in sacks last season as a redshirt freshman with 15.5.

The 6-6, 260-pound third-year sophomore played two games in 2018 as a freshman before breaking his ankle and taking a redshirt. He had a breakout season in 2019, finishing strong with 10.5 sacks in the second half.

The versatile Moore was an All-American as a freshman in 2018 and was limited to four games last year because of a knee injury. The 5-9, 180-pounder finishes his career with 143 catches and 1,645 yards in 17 games.

“Given the unprecedented circumstances we are currently living in, the best choice for my family and Iis to opt out of the upcoming season and prepare for the 2021 NFL Draft,” Moore said in a Twitter post. “This is a bittersweet decision because I always assumed I had more great moments at Ross-Ade Stadium ahead of me. and I will greatly miss the entire community. Please accept my heartfelt gratitude. #Boiler4Life.”