Pennsylvania to make all adults vaccine eligible by April 19 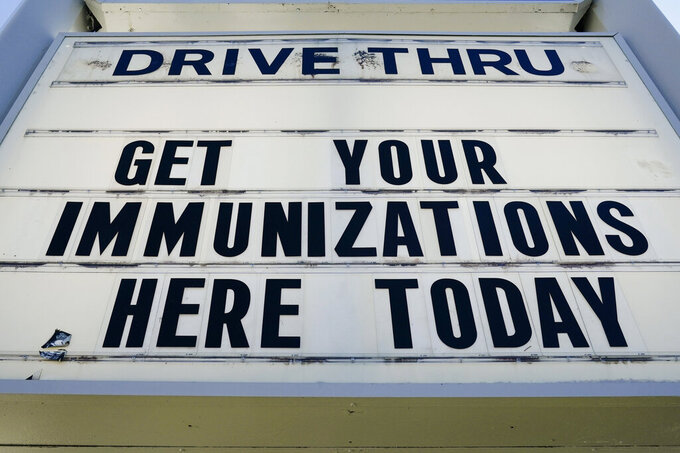 HARRISBURG, Pa. (AP) — Every adult in Pennsylvania will qualify for a COVID-19 vaccine starting April 19, and emergency responders, grocery workers and people in other high-risk groups are able to schedule their shots immediately, Gov. Tom Wolf's administration announced Wednesday in a dramatic expansion of the statewide rollout.

Acting Health Secretary Alison Beam said the new timeline is possible because Pennsylvania's vaccine supply is growing and getting more predictable, and providers across the state report they are ready for a fresh influx of people seeking protection against the coronavirus.

“Our ultimate goal has always been to get shots into people’s arms efficiently, effectively and equitably. We believe this plan will bring us one step closer to that goal,” Beam said at a news briefing.

The state is racing to vaccinate its population while it contends with a spring surge in coronavirus infections. Pennsylvania is averaging more than 4,000 cases per day — up 60% in two weeks — and hospitals are caring for hundreds more seriously ill patients than they were just 10 days ago.

“Our numbers are really, really rising very quickly," said Val Arkoosh, who chairs the Montgomery County Board of Commissioners. “I’m very concerned about the direction that this pandemic is going.”

Despite rising case counts and hospitalizations, Beam said the state is forging ahead with its plan to ease pandemic restrictions on bar seating, restaurant capacity and indoor and outdoor events starting Sunday. She cited the increased pace of vaccinations, but added that health officials will monitor any potential impact on how the virus is spreading.

The state has spent months vaccinating health-care workers, people aged 65 and older, younger people with serious medical conditions and others, a group that totals more than 4 million people, or about a third of the state's population.

Beam said the state is “very close” to finishing that cohort, allowing the state to make the vaccine more widely available.

On Wednesday, about 190,000 to 250,000 frontline workers became eligible to get jabbed, including police, corrections officers and other law enforcement; volunteer and professional firefighters; grocery employees; and food and farm workers.

Starting Monday, all other workers in Phase 1B of the state's vaccine plan will be eligible, a group that includes postal, public transit and manufacturing employees and numbers between 700,000 and 1 million people, Beam said.

Next up, starting April 12, will be Phase 1C, which includes workers in transportation and logistics, water and wastewater, communications and media, public health, legal services, finance and construction. That population totals between 1.3 million and 1.7 million people.

Everyone else can start making vaccine appointments on April 19.

Rep. Tim O’Neal, a member of the state's coronavirus task force, called it a day of hope and optimism.

“The light at the end of the tunnel is getting brighter and brighter every day,” O’Neal, R-Washington, said in a statement.

Montgomery County officials sounded a note of caution, saying it's still working through a backlog of tens of thousands of older people and those with high-risk medical conditions — many of whom signed up weeks ago. Arkoosh, the board chair, said supply still lags demand.

But she said an expected windfall of tens of thousands of doses of the one-shot Johnson & Johnson vaccine should allow the county to finish vaccinating its most vulnerable residents in April.

“I feel like we finally are going to have a chance to get ahead of this thing because we’ll have so much more vaccine here in the county,” Arkoosh said.

Philadelphia, which gets its vaccine supply directly from the federal government and runs its own program, is still focused on vaccinating people aged 65 and older. City health officials said they're hoping to expand eligibility to anyone who wants one by May 1, perhaps sooner. Philadelphians may still travel outside the city for a shot.

Statewide, Pennsylvania is averaging about 83,000 vaccinations a day. The supply has increased to the point that providers now feel comfortable scheduling weeks out, Beam said.

“We’ve been able to tell our providers, ‘You are going to get at least this floor of an amount of vaccine week over week. And so you can rely on that, you can schedule on that.’ Previously, we were in a world where that predictability didn’t exist,” she said.

More than a dozen other states, including neighboring Ohio and New York, are expanding eligibility to most or all adults this week.

President Joe Biden wants states to make all adults eligible to be vaccinated by May 1. Biden recently said that by April 19, at least 90% of the adult U.S. population would be eligible for vaccination, with access to a vaccination site within 5 miles of their homes.