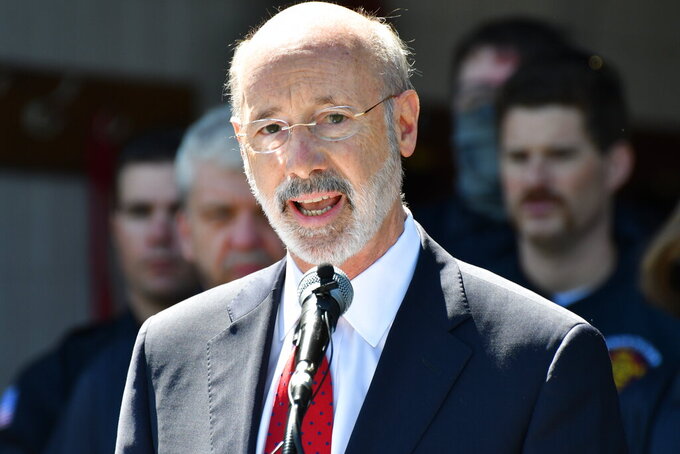 FILE - In this May 12, 2021 file photo, Gov. Tom Wolf speaks at an event in Mechanicsburg, Pa. Beyond the local races on ballots, Pennsylvania’s primary election will determine the future of a governor’s authority during disaster declarations. Voters statewide Tuesday, May 18 will decide four separate ballot questions, including two on whether to give state lawmakers much more power over disaster declarations. (AP Photo/Marc Levy)

The vote on Tuesday's statewide primary ballot came as Republican lawmakers across the country have sought to roll back the emergency powers governors wielded during the COVID-19 pandemic.

The constitutional amendments will give lawmakers much more power over disaster declarations, to apply whether the emergency is another pandemic or natural disaster.

Republicans see the referendum as a victory with strong political overtones, as the state gears up for a wide-open governor's race in 2022 and Wolf leaving office after two terms.

Republicans in the state Legislature and those aiming to replace him in 2023 have made Wolf a top political target, repeatedly attacking his stewardship during the pandemic, including his orders shuttering businesses, sending students home for online schooling and ordering masks worn outside the home.

The state's Republican Party chairman, Lawrence Tabas, said in a statement that Pennsylvanians voted to "put a stop to Gov. Tom Wolf’s dictatorship.”

Wolf has largely lifted his orders to stem the spread of the coronavirus, with the remaining limitations on crowd capacity lifting after May 30 and a mask-wearing mandate for the unvaccinated that tracks federal guidance, until 70% of adults are vaccinated.

Wolf's office maintained that the disaster declaration does not affect orders designed to prevent COVID-19 from spreading.

Rather, it relaxes regulations for medical professionals, gives the state access to federal emergency aid and streamlines National Guard deployments, among other things, his office said.

In statements Wednesday, the Legislature's top Republicans characterized the vote as a victory for individual rights and freedoms, a move to re-establish checks and balances to ensure a functioning, collaborative government.

Wolf said he spoke with legislative leaders of both parties to chart a path forward.

“So we’re starting that conversation,” he said Wednesday at a news conference in Pottstown. “You can’t just flick a switch and make the change. But the voters have spoken, and we’re going to do what I think the voters expect us to do and make the best of it.”

Wolf had strongly opposed the amendments, saying in January that Republicans were injecting partisan politics into emergency disaster response in a “thinly veiled power grab.” Just last week, he warned that the provisions were a threat to a functioning society that must respond to increasingly complicated disasters.

He struck a more conciliatory tone on Wednesday.

“There’s no question that I opposed this. I said that many times in many different ways,” Wolf said. “But the voters have spoken, and Pennsylvania wants to change the rules. And I think it’s incumbent upon us to the best we possibly can to make those rules work.”

Republicans accused Wolf of fear-mongering and had history on their side: The last time voters rejected a ballot question was in 1993, according to information provided by the state.

With votes still being counted Wednesday, support for the two questions led with 53% of the vote, with 89% of precincts reporting. More than 2.1 million ballots were cast, still less than a quarter of the state's 8.7 million registered voters.

The questions asked voters to end a governor’s emergency disaster declaration after 21 days and to give lawmakers the sole authority to extend it or end it at any time with a simple majority vote.

Before Tuesday, the constitution required a two-thirds majority vote by lawmakers to end a governor’s disaster declaration and, legally, the governor could issue an emergency declaration for up to 90 days and extend it without limit.

Governors have no say in what proposals lawmakers put on ballots to amend the state constitution.

In the meantime, the governor's emergency disaster declaration for the pandemic was set to expire midnight Thursday.

Wolf said he spoke with lawmakers about renewing the declaration, stressing the need to maintain the flexibility and access to federal aid.

It is possible that lawmakers will pick and choose which elements of the disaster response they want to extend or end.

The constitutional amendments take effect after the state certifies the election result, possibly in early June.