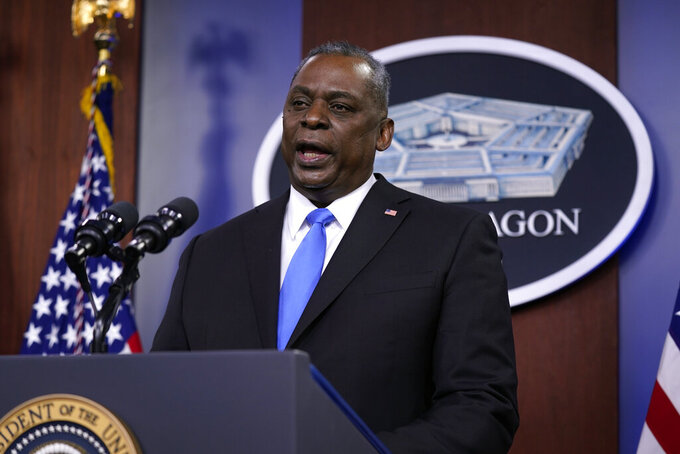 WASHINGTON (AP) — The Pentagon has approved the deployment of 20 more military vaccination teams that will be prepared to go out to communities around the country, putting the department on pace to deploy as many as 19,000 troops if the 100 planned teams are realized. The troop number is almost double what federal authorities initially thought would be needed.

Chief Pentagon spokesman John Kirby said Friday that Defense Secretary Lloyd Austin's latest approval brings the number of COVID-19 vaccination teams so far authorized to 25, with a total of roughly 4,700 service members. He said the teams, which largely involve active duty forces, are being approved in a phased approach, based on the needs of the Federal Emergency Management Agency.

So far, only one of the first five teams approved last week has actually been announced and deployed. That 222-member team from Fort Carson, Colorado, has arrived in Los Angeles, where it will help with a federally run vaccination site at California State University. The team is expected to begin providing vaccines to the public on Tuesday, but will likely do some initial vaccinations, including of team members, on Monday.

He added that the department expects to have more details soon on where the other four will deploy.

The Biden administration has said that delivering the vaccine to Americans is a top priority, raising questions about why the rollout of the teams hasn't moved more quickly.

The Pentagon first received the original request from FEMA in late January, for 100 vaccination teams with a total of 10,000 troops. Kirby said only one team has been deployed so far because it is a complicated process that requires coordination with local and state authorities to identify the right locations and determine the infrastructure and support that is needed. He said it takes time to set each site up correctly.

“We don’t want to move too fast so that we’re overwhelming the process or the system.,” Kirby told Pentagon reporters.

Officials have said that more vaccination sites will open around the country as more doses of vaccine become available. The military deployment comes as the nation is in a race against a virus that is spawning mutations, which may make it spread more easily and inflict deadlier disease.