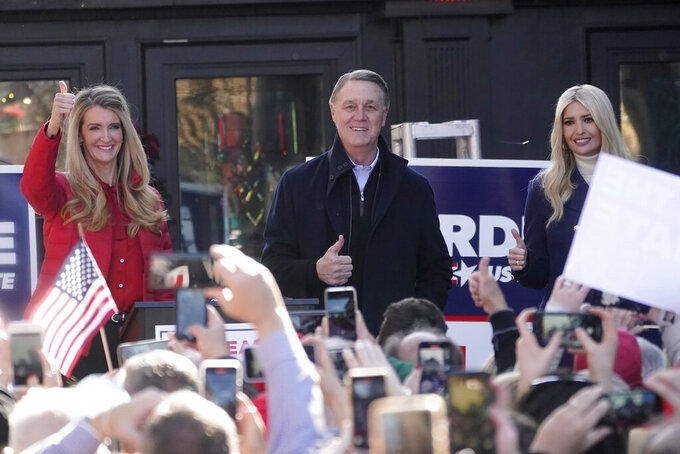 Sens. David Perdue and Kelly Loeffler belatedly declared their support on Tuesday for one-time payments of $2,000 that Trump and Democrats endorse but most congressional Republicans oppose. The move came only after the two Georgians sidestepped the matter for days while celebrating the passage of a long-sought aid package that included smaller $600 payments.

Now, to maintain their alliance with the mercurial president, the senators also find themselves aligned with the very Democratic congressional forces they caricature as socialists who’d tax-and-spend the nation into bankruptcy if the Georgia contests go against the Republicans.

Democrats must sweep the Jan. 5 runoffs to force a 50-50 chamber with Vice President-elect Kamala Harris as the tiebreaking vote for control. Republicans need just one of the Georgia seats to maintain a majority.

Perdue told Fox & Friends in a Tuesday morning interview he’d be “delighted” to back a $1,400 increase in individual payments. He called it “appropriate” and “the right thing to do.” Loeffler said in a separate Fox News interview that she’d support the increase, as well: “Absolutely, we need to get relief to Americans now.”

Those statements came less than a day after House Democrats adopted the $2,000 relief stipend, openly crediting Trump’s request. Senate Majority Leader Mitch McConnell, R-Ky., followed Tuesday by blocking the measure from being considered in his chamber, though he’s scheduled a vote for Wednesday. That could allow Loeffler and Perdue to cast a “yes” vote on the record, giving them partial political cover even if the measure doesn’t pass.

Trump amplified the matter again Tuesday via Twitter. “Give the people $2000, not $600,” the president wrote. “They have suffered enough!”

Perdue’s and Loeffler’s campaign aides did not respond to Associated Press inquiries asking whether they asked McConnell to allow an up-or-down vote.

It’s not the first conundrum Trump has foisted upon his Georgia allies. Tacitly echoing Trump’s debunked assertions of widespread voter fraud in the November election, neither senator has explicitly recognized that President-elect Joe Biden won nationally or in Georgia. Loeffler has left open the possibility of protesting the Electoral College count during a joint session of Congress on Jan. 6, even after McConnell urged Republican senators to accept the results.

That refusal to deviate from Trump underscores the president’s hold on the Republican base, which both senators will need to turnout in order to win.

“I stood by the president 100% of the time. I’m proud to do that,” Loeffler said Tuesday on Fox.

Speaking at a downtown Atlanta campaign stop, Ossoff said Perdue “needs to step up” and “join” Trump to help people who “have credit cards maxed out, rent past due, gas bills piling up, prescription drug costs, child-care costs.”

Warnock addressed a drive-in rally of union members later Tuesday and, without acknowledging the senators’ statements earlier in the day, criticized the pair as complicit in a pandemic economy that designates “essential workers” but “won’t give them essential pay.”

At the least, the matter ensures Perdue and Loeffler will face uncomfortable questions Republicans thought they’d settled after Congress passed a $2.3 trillion pandemic relief and government financing measure after months of delay.

On Fox, Perdue nodded to those dynamics, acknowledging he’d talked multiple times with Trump urging him to sign the COVID-19 relief package that Congress passed after months of delay. Those conversations came after Perdue and Loeffler endured weeks of Democratic attacks that are now certain to continue, just as Perdue had launched a new television ad taking credit for “direct checks to Georgians.”

Warnock reminded supporters that Loeffler and Perdue opposed more generous unemployment benefits earlier in the pandemic. Indeed, throughout the fall campaign and runoff blitz, the senators have hailed the “Paycheck Protection Program” that financed loans to businesses. But they have been less enthusiastic about direct individual support.

“We don’t need incentives not to work,” Loeffler said over the summer, referring to increased unemployment insurance payments. “We need to get folks back to work. ... We need to remove that incentive not to be at work.”

Around the same time, Perdue told PBS Newshour that he supported a “targeted” payroll tax cut over “just a direct payment like we did in the first round” of relief in the spring. That spending plan delivered Americans $1,200 cash payments.

Perdue and Loeffler, meanwhile, have anchored their arguments against Ossoff and Warnock with warnings that their election would herald a socialist expansion of government.

“We’re the firewall for stopping socialism,” Loeffler declared on Fox in the same segment she endorsed the $2,000 direct payments to Americans. Warnock and Ossoff would “rubber stamp” a “radical agenda to reshape this country into something unrecognizable,” she insisted.

For his part, Perdue has in recent weeks buttressed his assertion of Ossoff’s radicalism by noting that the Democratic challenger welcomed support from Bernie Sanders, a democratic socialist who caucuses with Democrats.

It was Sanders who originally proposed $2,000 monthly payments to Americans early in the coronavirus pandemic and who has been the most forceful in recent days in demanding action on the one-time $2,000 payment Perdue now supports.