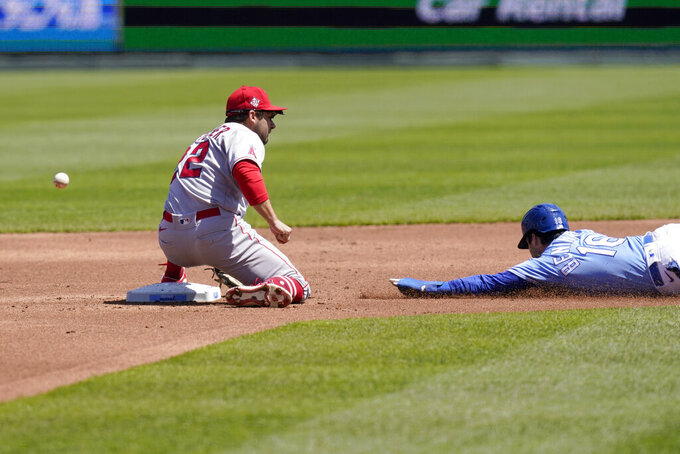 Kansas City Royals Andrew Benintendi (16) steals second base as the ball gets past Los Angeles Angels second baseman David Fletcher (22) during the first inning of a baseball game at Kauffman Stadium in Kansas City, Mo., Wednesday, April 14, 2021. Benintendi advanced to third base on the play. (AP Photo/Orlin Wagner)

KANSAS CITY, Mo. (AP) — Salvador Pérez homered and doubled to cap off an impressive series, leading Brad Keller and the Kansas City Royals over the Los Angeles Angels 6-1 on Wednesday.

A day after picking off David Fletcher at third base to end a 3-2 win, Pérez drove in two runs. The All-Star catcher went 8 for 12 with four RBIs this week against Los Angeles.

“This game is about making adjustments and that’s why we are in the big leagues,” Pérez said. “I just try to get better and help my team win.”

Carlos Santana also homered as the Royals took two of three from the Angels. It was the Royals' second series win of the year — it took them 14 tries to do that during the pandemic-shortened season.

Keller (1-1) went 5 2/3 innings and gave up one run and four hits, striking out five and walking one. That was a major step forward after he allowing 10 earned runs in 4 2/3 innings in his first two starts.

“That was nice to have this outing,” he said. “I just needed to get back to who I was and felt good today. I think being able to fix my mechanical stuff but also just competing and having the right mentality.”

“We had opportunities, but overall our pitching was pretty good,” Angels manager Joe Maddon said. “We just needed to score more runs.”

Pérez hit his third homer of the season, a solo drive in the third. Pérez doubled home Whit Merrifield in the seventh.

“He was huge for us today,” Royals manager Mike Matheny said. “This guy just continues to amaze us with how good he is.”

Jared Walsh doubled home Mike Trout in the fifth, pulling the Angels within 2-1.

Angels: OF Justin Upton was scratched on Tuesday night and remained out of the lineup on Wednesday with back stiffness.

Angels: Return home to take on Minnesota on Friday with Andrew Heaney on the mound (1-1, 7.00).

Royals: Continue their homestand with a four-game set that starts on Thursday with Jakob Junis (0-0, 0.00) starting against Toronto.