Performing in the pandemic, by zoom, drive-in and doorstep 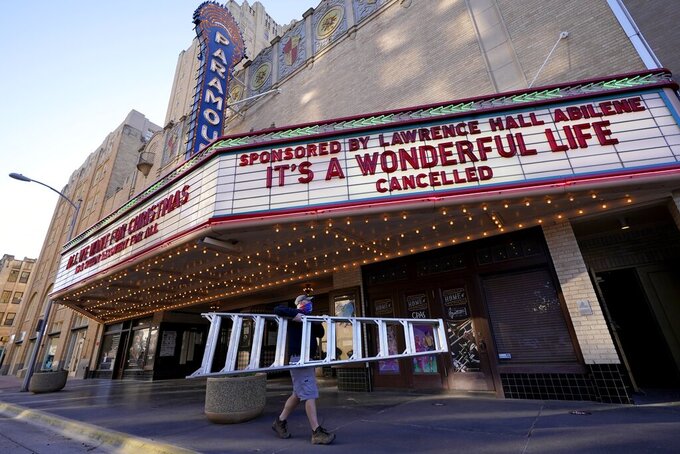 Employee Grayson Allred walks away with a ladder after working on the front marquee at the Paramount Theatre on Wednesday, Dec. 16, 2020, in Abilene, Texas. The marquee which in part reads, "It's A Wonderful Life, Cancelled", notifies all would-be patrons that the theatre has closed down indefinitely due to rising cases of COVID-19 in the city. (AP Photo/Tony Gutierrez)

NEW YORK (AP) — A good way to hear what we’ve missed this year is to listen to Sam Cooke’s landmark live album, “Live at the Harlem Square Club, 1963.” On a warm January night in downtown Miami, Cooke was well into his torrid set when, in the middle of “Bring it on Home to Me,” he asks the audience to join in.

The “Yeah!” that follows — instant, exuberant, loud — is one of the great call-and-responses in music, a euphoria of performer and audience as one.

Anything like that blissful moment has been painfully out of reach in 2020. Music halls have been closed since March. Broadway is shuttered. Comedy clubs empty. Live studio audiences mostly sent home. Cinemas with only “Wash your hands” on the marquee. The entertainment world has trudged on, by live-streaming, zooming and improvising. But its in-person soul was nearly snuffed out, and with it a lifeblood of human connection.

The pandemic has upended entertainment industries, driving thousands out of work, reshaping time-tested institutions and accelerating digital transformations. For the arts, which are predicated on bringing people closer together if only for a song or a few acts, a year of isolation and social distancing goes against nature. Yet despite gathering being nearly impossible in 2020, many have found ways to connect nevertheless — even if applause is on mute, and standing ovations are sounded by car honks.

The show isn’t the same, but it goes on.

After a month of practicing and playing inside, Los Angeles Philharmonic members Cathy and Jonathan Karoly decided they had had enough. Cathy, a flutist, and Jonathan, a cellist, began playing on the porch of their Pasadena, California, home. At first, they didn’t tell anyone but their neighbors. Friends came and sat on the lawn. Passersbys inquired. And before they knew it, the Karolys had played 25 concerts, through heat and (until recently) virus spikes. They got adept at printing programs and putting out folding chairs. A steam of Philharmonic colleagues joined them. Some wept.

“We take it very seriously,” Jonathan says, speaking with his wife. “The fact that it’s on our porch is irrelevant. We never wanted to sacrifice the quality. People come and they’re going to hear a first-rate concert. We challenged ourselves.”

With famed concert halls and neighborhood joints alike closed around the world by COVID-19, new venues took their place. The drive-in, a barely surviving remnant of the ’50s, proliferated, filling everywhere from box-store parking lots to deserted high-school ball fields. Playing not just movies but concerts, graduations and church services, the drive-in was reborn as the pandemic’s unlikely ark.

Much of the year’s entertainment was left to the streaming services, an ever-expanding array of subscription options that offered new oceans of content, and potentially a vision of Hollywood’s future. Not everything worked. Remember Quibi? But media goliaths increasingly reoriented their operations for the unfolding streaming wars. Warner Bros., the studio of “Casablanca,” detoured dramatically, sending "Woman Woman 1984," straight into homes and potentially forever downsizing the movie business.

Digital was both a lifeline and an imperfect stopgap. Zoom performances, virtual cinemas, filmed theater — even when done really well, as in “Hamilton” or “David Byrne’s American Utopia” — were all inevitably insufficient imitations of the genuine article. But they made weathering the storm possible. Some pandemic-fueled creations — zoom reunion shows, podcasts — stitched together people otherwise quarantined from one another. Artists like Taylor Swift and Fleet Foxes used time shut in to create arguably their most bracingly intimate work.

One moment of grace came in late April with the virtual 90th birthday concert for Stephen Sondheim. The theater community, settling in for a dark year, was beleaguered and lonesome.

“We’re dealing with so much grief that it feels kind of petty to be concerned about whether we can perform,” says Raúl Esparza, who hosted the concert. “Yet there’s something about the intimacy of live performance that you feel bereft without it. Like emptiness the world over. It’s not a small thing. It’s how we live.”

Technical troubles plagued the concert’s start. Eventually it began, with “Merrily We Roll Along.”

“Part of what made it so special was the mess,” says Esparza. “The fact that things went so wrong made it seem like things couldn’t possibly go right.”

Yet they did, and Esparza’s rendition of “Take Me to the World” — “Take me to the world/ Out where I can push through crowds” — took on a new poignancy in lockdown. Later, Esparza would watch a Twitter map of the show’s hashtag lighting up around the globe as the performance went on. “At one point, probably during ‘Ladies Who Lunch,’ New York starts to glow,” says Esparza.

Performers like Esparza have moved on to other virtual productions, TV and film work. But reopening for Broadway remains at least months away, part of the endless, indefinite postponements of the pandemic. A summer’s worth of a blockbusters pulled up stakes and now waits in the wings, while theaters await financial relief from Congress to stave off bankruptcy.

But 2020 also brought with it a sense of urgency. Protests and uprisings following the death of George Floyd were felt acutely in entertainment, where diversity still lags in many meaningful areas. Many of the year’s most vital works spoke directly to the moment, even if they were created long before it.

Maybe the year’s greatest music act was the 7 p.m. pots-and-pans clatter for hospital and essential workers that echoed through New York, and many other places as the pandemic surged around the country. Death was always close at hand, and the drumbeat of losses in the arts, whether from COVID-19 or other causes, was constant. John Prine.Chadwick Boseman. Alex Trebek. Bill Withers. Sean Connery.Little Richard. Carl Reiner. Eddie Van Halen. Charley Pride.

In June, the comedian and “Conan” writer Laurie Kilmartin lost her mom, JoAnn, to complications from COVID-19. While her mother was in the hospital, Kilmartin tweeted with heartache and humor through her mom’s agonizingly quick descent. One example: “She is barely breathing but it would be great if she could awaken from all this and tell me to wash my robe.”

“It always helps me to write jokes about a real situation,” says Kilmartin. “Then I can take whatever emotion it is — grief — and make it useful.”

Like most stand-ups, Kilmartin, believes getting in front of an audience — for her, five times a week since 1987 — is necessary to stay sharp. Zoom sets have helped, but living without the thing she does best has been disorienting. On stage, Kilmartin knows she’s good. She knows she’s in control.

“It’s brain to brain,” says Kilmartin. “When you’re on stage, you’re actively finding common ground with a whole bunch of strangers for 30 minutes or an hour. And it’s super intense. When you’re in the audience, it’s also super intense. It’s someone changing the temperature of your body for an hour.”

The outlook for live performance in 2021 is, of course, uncertain. Vaccines are rolling out, but daily cases are extremely high and global deaths exceed 1.7 million. Nobody knows how soon it will be before movie theaters are again packed, Broadway is bustling and concert stages are booming. But whenever it is, something innate and beautiful about us will be restored.

Let me hear you say yeah.