Pfizer swings to small profit as vaccines begin to roll out 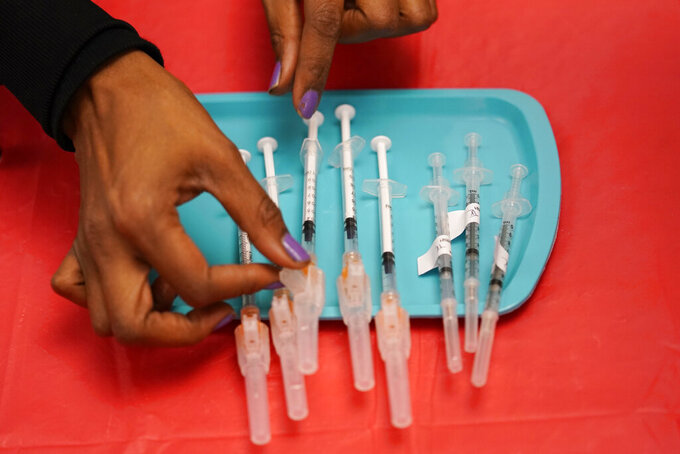 FILE - In this Jan. 22, 2021, file photo, Tina Killebrew, a certified medical assistant, prepares doses of the Pfizer-BioNTech COVID-19 vaccine at a vaccination center at the University of Nevada, Las Vegas in Las Vegas. A racial gap has opened up in the nation's COVID-19 vaccination drive, with Black Americans in many places lagging behind whites in receiving shots, an Associated Press analysis shows. (AP Photo/John Locher, File)

Pfizer, the first company to get U.S. emergency use authorization for a COVID-19 vaccine, swung to a small profit in the fourth quarter as it started shipping vaccines globally.

The drugmaker expects roughly $15 billion in revenue this year from the vaccine, which won emergency clearance in mid-December from U.S. regulators and already has racked up approvals in more than 50 countries. The two-dose vaccine is about 95% effective at preventing coronavirus symptoms and is one of only a few vaccines available to check the global pandemic.

Rising medicine sales helped offset big increases in spending on research and production. The New York company is manufacturing hundreds of millions of doses of the COVID-19 shot and pushing forward on research gauging its effectiveness in different patient groups, such as teens and people with compromised immune systems.

Pfizer has said that this year it can produce 2 billion doses of the vaccine, developed with its German partner BioNTech, including 200 million doses promised for the U.S. by the end of May.

On a conference call with analysts, Pfizer executives said that so far the vaccine appears quite effective against the COVID-19 variants now circulating in multiple countries because it produces such high levels of antibodies against the virus. Still, they are researching that issue and believe that protecting against COVID-19 could require booster shots every six or 12 months because of variants, much like the flu vaccine.

“We are going to be ready to develop, in less than 100 days, a new vaccine if needed,” to combat new virus strains, Chief Executive Albert Bourla said in an interview.

Evercore ISI analyst Umer Raffat noted that Pfizer's $15 billion forecast for COVI-19 vaccine revenue this year only covers the doses under contract, which is less than half of the 2 billion planned.

Pfizer has only disclosed the U.S. price, $1.95 per dose, but said that after the pandemic is under control, a combination of higher prices and lower costs for manufacturing will make it more profitable.

Bourla called Pfizer’s success in developing such a potent vaccine in under a year — something that often takes a decade — the culmination of Pfizer’s decade-long conversion from a diversified drugmaker into one focused on science and innovation.

The company has been remaking itself to focus on high-tech drug development such as gene therapies it’s now testing for rare diseases. In 2019 it spun off its consumer health product business to help create a joint venture with GlaxoSmithKline. Then in November, Pfizer spun off its Upjohn business, which sells older, mostly off-patent drugs such as Viagra, and combined it with Mylan, a top maker of generic pills and the EpiPen auto injector for treating allergic reactions. The new business is called Viatris.

“Following the spinoff of Viatris, will believe Pfizer has a strong growth profile as the innovative pipeline can have a more meaningful impact on growth," Edward Jones analyst Ashtyn Evans wrote to shareholders. "We believe Pfizer will use its strong cash flow, particularly this year, to invest in internal innovation, acquisitions, and returning cash to shareholders.”

The maker of the world’s top-selling vaccine, Prevnar 13 for preventing pneumonia and related bacterial diseases, reported revenue of $11.68 billion, up 12% from 2019's fourth quarter. That beat Wall Street forecasts for $11.01 billion.

Quarterly sales were led by $1.4 billion from breast cancer drug Ibrance, $1.3 billion from stroke preventer Eliquis and $1.75 billion from Prevnar 13; all three had sales rise more than 10%. Prevnar 20, an updated version that protects against seven more strains of pneumococcal disease, is currently under review by the U.S. Food and Drug Administration.

Pfizer also posted revenue of $1.5 billion from its business making sterile injectable drugs, and $1.4 billion in revenue from partnerships.

Pfizer uncharacteristically said it plans no share buybacks this year.

“We simply believe we have better investment opportunities” in internal drug development and acquisitions, Chief Financial Officer Frank D'Amelio said in an interview, noting that Pfizer is facing patent expirations on some big-selling drugs starting in 2025. The company will need to replace their revenue.