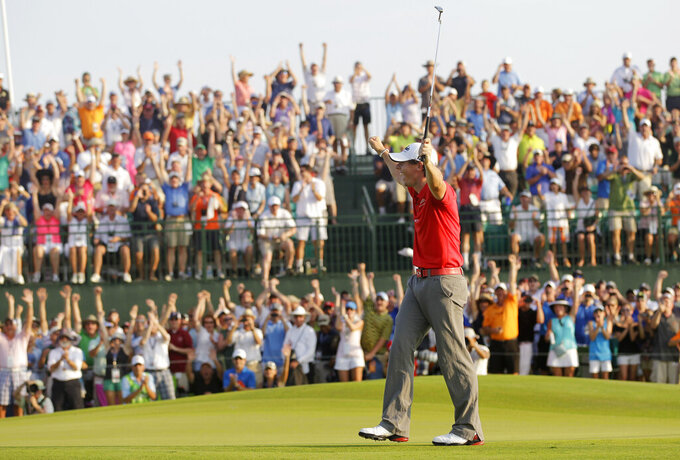 FILE - Rory McIlroy of Northern Ireland reacts to his victory on the 18th green in the final round of the PGA Championship golf tournament on the Ocean Course of the Kiawah Island Golf Resort in Kiawah Island, S.C., in this Sunday, Aug. 12, 2012, file photo. The PGA is limiting attendance at Kiawah this year to 10,000 fans a day. (AP Photo/John Raoux, File)

Notes: The PGA Championship was last at Kiawah Island in 2012 when Rory McIlroy set the championship record with an eight-shot victory. ... The field is the strongest among majors with 99 of the top 100 players in the world. Matthew Wolff, who withdrew, is the only player missing. ... Jordan Spieth, coming off his fourth straight top-10 finish, needs to win the PGA Championship to become only the sixth player with the career Grand Slam. None of the other five completed it at the PGA Championship. ... This is the second time in three years the PGA is held in May. It moved back to August last year because of the COVID-19 pandemic. ... Americans have won the last five times in the PGA Championship starting with Jimmy Walker at Baltusrol in 2016. ... The top 60 in the world ranking after this week are exempt for the U.S. Open. The top 50 are exempt for the British Open. ... The PGA of America is allowing about 10,000 spectators. They are not required to wear masks. ... Americans have won 17 of the last 24 majors.

Notes: Paula Creamer returns to the LPGA Tour for the first time since a tie for 63rd in the BMW Ladies Championship in October 2019. She also has an exemption into the U.S. Women's Open in two weeks. ... Lexi Thompson holds the tournament record at 20-under 264 in 2017. ... The field features four of the top 10 in the world, including Thompson, Nelly Korda and Sei Young Kim. ... Jennifer Kupcho is in the field after sitting out the two-week Asia swing. Kupcho is 13th in the Solheim Cup standings. ... Ariya Jutanugarn goes for her second straight victory. She was a late entry into the field, along with sister Moriya. ... The tournament was canceled last year because of the COVID-19 pandemic. ... Only three winners at Kingsmill in 15 years have yet to win a major. ... Lydia Ko, who leads the Race to the CME Globe, is not playing. ... After a two-week Asia swing, the LPGA Tour plays eight straight weeks in the United States, including two majors.

Next week: Made in Himmerland.