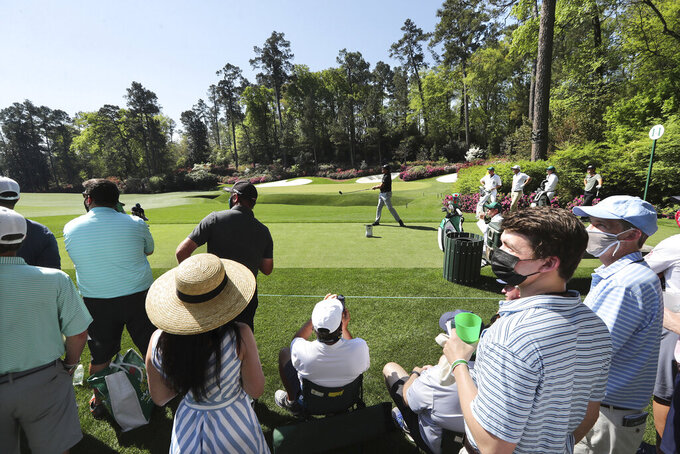 The small gallery of patrons watches Phil Mickelson tee off on the 14th hole during his practice round for the Masters at Augusta National Golf Club on Tuesday, April 6, 2021, in Augusta, Ga. (Curtis Compton/Atlanta Journal-Constitution via AP)

Except, as it turns out, when it comes to pavlova.

Augusta National has a rule banning cellphones on the course, and it also applies to the Champions dinner. So when Adam Scott got to pick the menu in 2014 for the annual pre-Masters meal for past winners, his dessert choice was a strawberry and passion fruit pavlova.

Hardly anybody in the room knew what the meringue-and-fruit mixture was. And without their phones, nobody could Google it, either.

This is where Mickelson comes in.

“I said, ‘Oh, pavlova, that’s inspired by the great Russian ballerina Anna Pavlova who was touring through New Zealand, Australia, and an Australian chef — so inspired by her beautiful movement and tutu — he made a dessert after her,” Mickelson recalled.

Phil being Phil, nobody believed him. Billy Payne, the chairman of Augusta National at the time, shot Mickelson what might be best described as a skeptical look. Zach Johnson wagered $100 that Mickelson was just making things up.

“Everybody is calling me out on my BS,” Mickelson said. “And a lot of times, I am BS'ing.”

Not this time, however.

Mickelson has a daughter who studied dance, and she had written a biography on Anna Pavlova. That happened to be why Mickelson made 32 pavlovas for her class, and became an expert of sorts on her story — and her namesake dessert.

“And I ended up being right, which is not often,” Mickelson said. “But I was right on that particular moment.”

By the way, the desserts that reigning champion Dustin Johnson chose this year were apple pie, peach cobbler and vanilla ice cream. No Googling required.

For the third time in five years, the Par 3 Contest — a longstanding Wednesday tradition at Augusta National — is off.

It was canceled by rain in 2017, then doomed by concerns about the COVID-19 pandemic and social distancing both last year and this year.

Matt Jones’ only other trip to the Masters as a player was in 2014. He missed the cut but remembers the Wednesday contest fondly.

“I do remember having a hole-in-one on the par 3, and that was probably one of my fondest memories in golf, having my 2-year-old daughter get the ball out of the hole,” Jones said.

Players understand why the contest isn’t happening, but they’re also disappointed. Collin Morikawa said his girlfriend was upset that she couldn’t take part. Lee Westwood’s son is caddying for him this week; Sam Westwood had been looking forward at taking aim during the contest.

“It almost feels like the start to the Masters,” Westwood said. “It’s a shame not to be playing. And I understand why it can’t be played. I’ll hopefully be back here next year and I get a chance to play in it. I think Sam misses it more. He wanted to have a go at that 9th hole with a wedge.”

With 88 players in the field, that means the first two rounds couldn’t entirely be composed of threesomes. Instead, it’ll be 28 threesomes and two twosomes.

Michael Thompson and Hudson Swafford will be first off the tee at 8 a.m. Thursday, 15 minutes after honorary starters Lee Elder, Gary Player and Jack Nicklaus open the Masters.

The other twosome for the first two rounds, Vijay Singh and Martin Laird, goes off at 11:06 a.m. Thursday. They’ll be first off Friday, also at 8 a.m., while Thompson and Swafford take the 11:06 slot for the second round.

Bryson DeChambeau’s added length has been a major talking point in golf of late, with no shortage of players marveling at how far he can hit the ball.

Mike Weir said he’s a fan of what DeChambeau is doing. And because Weir is Canadian, it made sense for him to draw a parallel to — what else? — hockey.

“I think sports evolves,” the 2003 Masters champion said. “All sports evolve. There’s better athletes in every sport you watch. You watch NHL Network and you watch the classic games versus today’s game and the evolution of the players, it’s quite remarkable there, too. You watch Connor McDavid skate compared to the guys back in the day. I mean, there’s evolution in sport.”

“I hope the rain stays away all week," said Paul Casey, whose best Masters finish has been a tie for fourth in 2016. “I think it’s what the patrons want as well and the fans watching on TV. It’s absolutely glorious. This is what the Masters should be."

Justin Thomas, who is still chasing his first Masters title, on what he hopes the Champions dinner is like if he ever gets to attend one: “In terms of a meal, I mean, you don’t care. You could serve water and I would be pleased as long as I’m there because that means that I’ve won the Masters.”