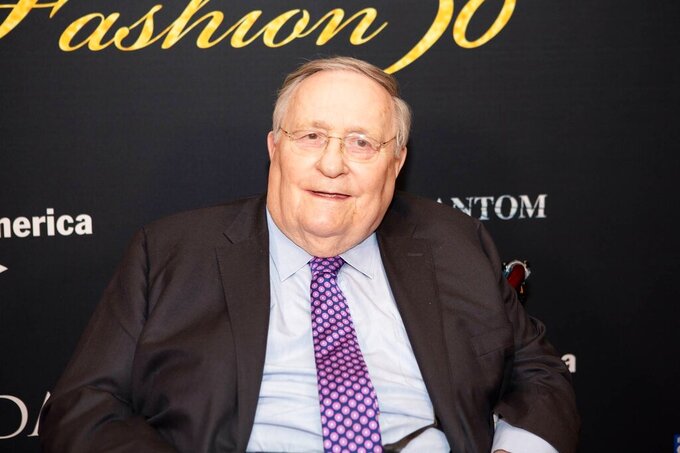 This 2018 image released by Jeremy Daniel shows Philip J. Smith at the 30th anniversary celebration for "The Phantom of the Opera," in New York. Smith, who rose from box office treasurer at the Imperial Theatre on Broadway to chairman and co-CEO of the theatrical giant Shubert Organization, has died from complications from COVID-19, according to his daughters. He was 89. (Jeremy Daniel via AP)

NEW YORK (AP) — Philip J. Smith, who rose from box office treasurer at the Imperial Theatre on Broadway to chairman and co-CEO of the theatrical giant Shubert Organization, has died from complications from COVID-19, according to his daughters. He was 89.

Smith “influenced every aspect of the professional theater and earned the respect and admiration of everyone from the stage doormen to the greatest performers and creative talents of our time,” Robert E. Wankel, chairman and CEO of The Shubert Organization, said in a statement.

Smith would assume the role of president, and in 2008, he was named chairman and co-CEO alongside Robert E. Wankel. Smith retired in June 2020 and also stepped down as chairman of The Shubert Foundation, the company’s nonprofit arm.

Hugh Jackman took to Twitter to say “Broadway lost a titan of the theater.” Betty Buckley added: “He was always so very kind & supportive. Such a loss & end of an era.”

In 2011, Smith was honored with a special Lifetime Achievement Tony Award in recognition of his contributions to the theater industry. “We may live in smartphones and iPads, but nothing will ever replace the magic of Broadway. I’m so proud to be a part of it,” he said at the time.

Smith was promoted to Shubert vice president in 1969, a post he held for 15 years. One of his most important innovations was the introduction of credit cards as a method of buying show tickets. He was also instrumental in the establishment of the Times Square TKTS discount ticket booth. He helped decide what Broadway-goers would see, sometimes produced shows and often invested in them, negotiated labor contracts and maintained the aging theaters.

“It’s never boring here,” he told Playbill in 2005. “I come in here in the morning, and I have no idea what’s going to happen in the course of the day. It can just change, turn around, spin off in any number of directions. And that’s the way my entire life in the theatre has been."

When he was inducted in the Theatre Hall of Fame in 2015, Tony Award-winner Bernadette Peters was chosen to honor Smith. “It’s no secret you have always been head-over-heels in love with Broadway. You share the excitement we all feel about putting on a show. You have a magic touch that makes all of us feel nurtured and protected,” she wrote.

Born and raised in Brooklyn, he was the eldest son of Irish immigrants. Smith was an usher at a Brooklyn movie theater in high school and not long after became head usher, overseeing 28 staffers.

He became assistant manager of the Palace Theatre on Broadway, where he met Judy Garland. One Sunday night, she called him, upset that she didn’t have any whiskey to serve backstage visitors.

All liquor stores were closed, but a quick-thinking Smith went to a tavern across the street and convinced the bar tender to loan him several bottles.

At 26, he landed a job in the box office of the Imperial Theatre. He recalled in his Tony speech that it was 1957 and the show there was “The Most Happy Fella” by Frank Loesser.

He would soon impress Shubert lawyer Bernie Jacobs. “They both had a sense of honesty and fairness in a business that did not lack for shady characters,” according to “Razzle Dazzle,” by Michael Riedel.

He is survived by his daughters, Linda and Jennifer.