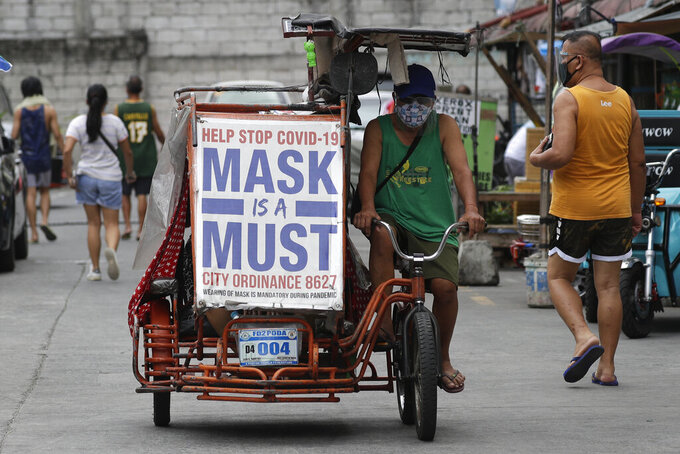 A man rides his pedicab with a slogan to remind people to wear masks to prevent the spread of the coronavirus in Manila, Philippines on Monday, April 26, 2021. COVID-19 infections in the Philippines surged past 1 million Monday in the latest grim milestone as officials assessed whether to extend a monthlong lockdown in Manila and outlying provinces amid a deadly spike or relax it to fight recession, joblessness and hunger. (AP Photo/Aaron Favila)

MANILA, Philippines (AP) — Coronavirus infections surged past 1 million in the Philippines on Monday as officials assess whether to extend a monthlong lockdown in the Manila region amid a grim spike in cases or relax it to fight a recession, joblessness and hunger.

The Department of Health reported 8,929 new infections on Monday, bringing the country’s total to 1,006,428, including 16,853 deaths. The totals are the second highest in Southeast Asia after Indonesia.

The Philippines imposed its first virus lockdown in March last year, confining millions of people to their homes and shutting public transport and most businesses. The heavy restrictions were eased later in the year but the economy still contracted by 9.6% in 2020, with unemployment and hunger at their worst in years.

Infections, however, spiked again last month to some of the worst levels in Asia, prompting President Rodrigo Duterte’s administration to reimpose a lockdown in the Manila region, the country’s financial and commercial hub with more than 25 million people. Several hospitals in the metropolis reported being overwhelmed, with new COVID-19 patients waiting in hospital driveways, ambulances and cars.

Hospital officials say many health workers have been infected or have had to take a break due to stress and fatigue.

Despite a slight decline in new cases, Health Secretary Francisco Duque III said he believes the current lockdown should be extended by another week or two. Economic officials have warned that a prolonged lockdown would increase unemployment and slow an economic recovery.

The Philippine Red Cross said surging infections have placed hospitals “under siege,” and that it has set up field hospital tents and converted unused classrooms and buildings to quarantine patients. “We urgently need more medical volunteers,” said Sen. Richard Gordon, who heads the Philippine Red Cross. “Urgent extra medical care is a matter of life and death.”

Duterte and his administration have faced widespread criticism over his handling of the pandemic and the sluggish start last month of a vaccination campaign which has been hampered by supply problems, delivery delays and public hesitancy.

Concerned Filipinos have set up sidewalk stalls across the country marked “community pantries” to hand out donated rice, noodles, eggs, vegetables and other food items to the poor. The stalls have drawn swarms of people, sparking concerns from lockdown enforcers.

Presidential spokesman Harry Roque tried to paint a more optimistic outlook. While he acknowledged the number of infections has ballooned, he stressed that most patients have recovered and the government is taking steps to make intensive care units available for patients with severe infections.

“Let’s not focus on the total figures. Let’s look at the figures of nearly 900,000 who have recovered and our case fatality rate that is low based on the world average,” Roque said in a televised briefing. “So, I don’t think it is a negative reflection.”

Cabinet officials and medical experts are to meet Tuesday to recommend whether to continue the lockdown to Duterte, who may announce a decision on Wednesday, Roque said.