Phillies catcher Realmuto back from COVID-19 IL after 1 day 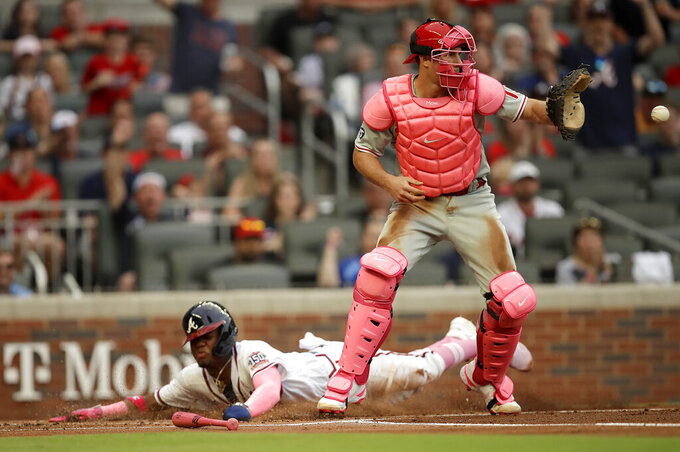 Atlanta Braves' Ronald Acuna Jr. slides safe to score as Philadelphia Phillies catcher J.T. Realmuto waits for the ball in the first inning of a baseball game Sunday, May 9, 2021, in Atlanta. Acuna scored on a single by Braves' Freddie Freeman. (AP Photo/Ben Margot)

DUNEDIN, Fla. (AP) — Philadelphia Phillies catcher J.T. Realmuto is back in the starting lineup one day after being placed on the COVID-19-related injured list.

Realmuto was cleared to return by Major League Baseball, and was the designated hitter and batting fourth on the posted lineup for Friday night's game against the Toronto Blue Jays in Dunedin, Florida.

Realmuto felt ill and had a fever Wednesday night and was placed on the IL in accordance with MLB protocols. He didn’t accompany the team on its flight to Florida but traveled on his own.

The Blue Jays are playing their third and final homestand at their spring training ballpark because of COVID-19 protocols in Canada. Toronto will be shifting games to Buffalo, New York, next month.

Realmuto left Tuesday’s game against the Washington Nationals after taking a foul ball off his left knee and sat out Wednesday night due to bruising and soreness.

A player goes on the COVID-19 IL by testing positive himself or for contract-tracing purposes after possibly being exposed to someone who tested positive.