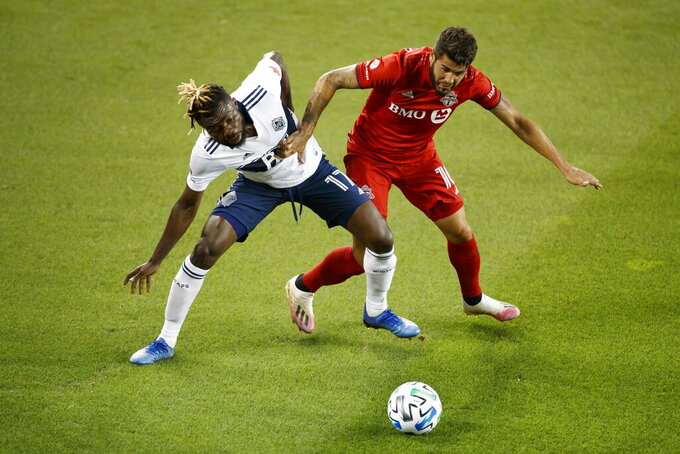 TORONTO (AP) — Pablo Piatti scored a pair of goals and Toronto FC defeated the Vancouver Whitecaps 3-0 on Tuesday night as the teams restarted the regular season.

Major League Soccer shut down on March 12 because of the coronavirus, after the league's teams had played just two games.

After the recent MLS is Back tournament in Florida, teams returned to games in their home markets. But the three teams in Canada are hampered by travel restrictions and quarantine rules to and from the United States. So for at least the initial phase of the season, they will play eachother.

Piatti's blast from long distance in the 27th minute gave Toronto the early lead. It was the Argentine's first MLS goal.

Piatti added a second in the 55th minute. Nick DeLeon scored in the 83rd for the final margin.

Toronto went undefeated in the group stage of the MLS is Back tournament, but was eliminated in the round of 16 by NYCFC.

The Whitecaps were missing key players for the tournament, but also made it to the knockout round, where they were eliminated by Sporting KC.