Pilgrims arrive in Mecca for downsized hajj amid pandemic 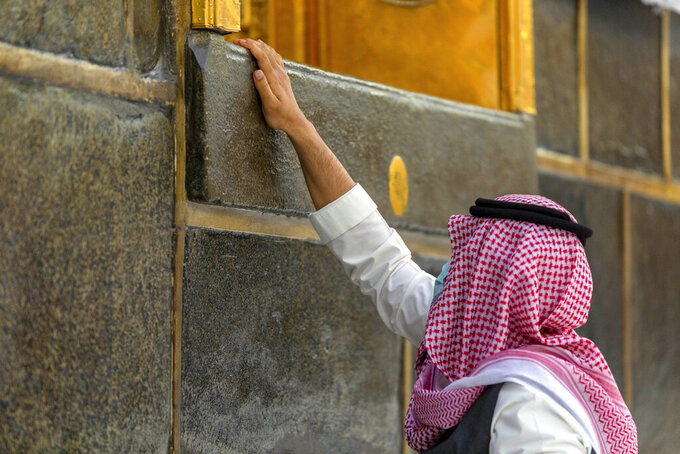 A pilgrim touches the Kaaba, the square structure in the Great Mosque, toward which believers turn when praying, in Mecca, Saudi Arabia, Monday, July 27, 2020. Anywhere from 1,000 to 10,000 pilgrims will be allowed to perform the annual hajj pilgrimage this year due to the coronavirus pandemic. (Saudi Ministry of Media via AP)

DUBAI, United Arab Emirates (AP) — Muslim pilgrims have started arriving in Mecca for a drastically scaled-down hajj, as Saudi authorities balance the kingdom's oversight of one of Islam's key pillars and the safety of visitors in the face of a global pandemic.

The hajj, which begins on Wednesday, normally draws around 2.5 million people for five intense days of worship in one of the world's largest gatherings of people from around the world.

This year, Saudi Arabia's Hajj Ministry has said between 1,000 and 10,000 people already residing in the kingdom will be allowed to perform the pilgrimage. Two-thirds of those pilgrims will be from among foreign residents in Saudi Arabia and one-third will be Saudi citizens.

The kingdom has one of the Mideast’s largest outbreaks of the coronavirus, with nearly 269,000 reported infections, including 2,760 deaths.

Fatin Daud, a 25-year-old Malaysian who is studying Arabic in Saudi Arabia, was among the select few whose application for hajj was approved. After her selection, Saudi Health Ministry officials came to her home and tested her for the COVID-19 virus. She was then given an electronic bracelet that monitors her movements, and told to quarantine for several days at home.

After that, Daud was moved to a hotel in Mecca, where she remains in self-isolation, still wearing the electronic wristband. A large box of food is delivered to her hotel room three times a day as she prepares to begin the hajj.

“It was unbelievable. It felt surreal because I was not expecting to get it," she said of her excitement when she found out she was selected. Daud said she's praying for the end of COVID-19 and for unity among Muslims around the world.

“I am confident that safety measures are being taken and that the only thing that we need to do as pilgrims is follow instructions, and try our best to support each other," she said.

While self-isolating has been emotionally challenging, Daud said she is part of a group of about 10 Malaysian and Singaporean pilgrims connecting online and sharing tips and religious exercises to keep busy.

The Saudi government is covering the expenses of all pilgrims this year, providing them with meals, hotel accommodation, transportation and health care. Normally, the hajj can cost thousands of dollars for pilgrims who save for a lifetime for the journey. It also generates billions of dollars in revenue each year for Saudi Arabia.

Saudi kings have for generations assumed titles as custodians of Islam’s holiest sites, and their oversight of the hajj is a source of prestige and influence among Muslims globally. Saudi Arabia has never canceled the hajj in the nearly 90 years since the country was founded.

King Salman, who typically oversees the hajj from Mecca, underwent surgery to remove his gallbladder at a hospital in the capital, Riyadh, the royal court said last week. The 84-year-old monarch was to remain at the hospital to recover and be observed by doctors.

For the first time in Saudi history, no pilgrims from abroad were permitted to take part in the hajj due to concerns about the coronavirus and overcrowding. It's a stark departure from previous years, when some 2 million pilgrims from more than 160 countries flocked to Mecca for the spiritual rituals, mostly from across Asia and Africa.

Although the hajj often draws all age groups, pilgrims this year were required to be between the ages of 20 and 50, and in good health.

The physically demanding rituals of the hajj offer a profound experience for Muslims, with the faithful often weeping, their palms stretched toward the sky, in prayer and repentance. The hajj is required of all able-bodied Muslims once in a lifetime.

This year, international media were not given permission to cover the hajj from Mecca.

Also this year, pilgrims must wear face masks and will only be able to drink holy water from the Zamzam well in Mecca that has been prepackaged in plastic bottles. Pebbles for casting away evil that are usually picked up by pilgrims along hajj routes will be sterilized and bagged before being distributed to the pilgrims.

Pilgrims are also bringing their own prayer rugs and will be required to pray at a distance from one another, rather than packed shoulder-to-shoulder.