Pioli: Playing without fans is the lesser evil 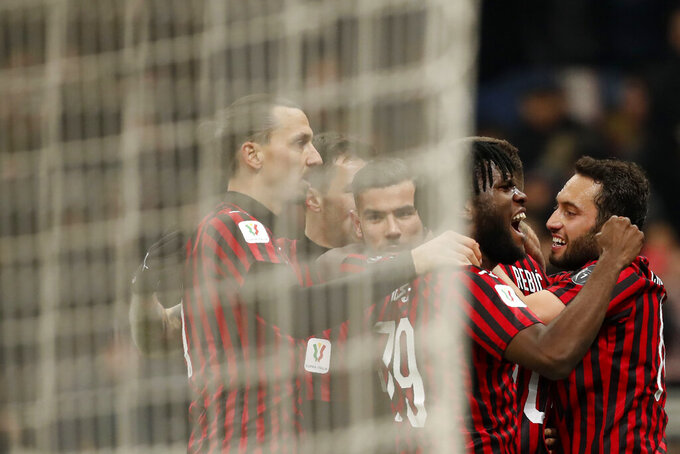 MILAN (AP) — AC Milan coach Stefano Pioli believes playing without fans is “the lesser evil” as his club prepares to kickstart the resumption of Italian soccer.

Exactly 100 days after the game was meant to take place, Milan will visit Juventus on Friday for the second leg of their Italian Cup semifinal.

It is the first Italian soccer match since March 9, when the country was put into lockdown because of the spread of the coronavirus pandemic.

There were nearly 73,000 spectators at San Siro for the first leg — a record for an Italian Cup semifinal — but the return match will be without spectators and a maximum of 300 people in the stadium, including both teams and officials.

“To start playing again is the most important thing but it needs to be done safely, that’s clear,” Pioli said. “Here at Milan, we’ve always been careful, we’ve taken the necessary precautions an we have always been in favor of restarting the season.

“Obviously playing without the fans is a massive setback, but at the moment it’s the lesser evil. There is no alternative.”

Milan has already played without fans this season as it lost 2-1 at home to Genoa in an empty stadium, the day before soccer was halted.

“I think we will need to adapt immediately,” Pioli said. “We paid the price for the change in the league when we faced Genoa at San Siro in a new environment for us. We need to make use of that experience tomorrow night.

“Now that we are fortunate to restart we’ll need to do it with all our passion and enthusiasm, above all so we can entertain and please our fans, and all the soccer fans who will be following from home in this particularly delicate time in our lives.”

Milan also lost 1-0 at Juventus in the league in November.

“Both games were difficult for us but also for them and I must say that on both occasions we came away with some regrets in terms of the results,” Pioli said. “If they found the right hit at the right time in the first two games, we’ll have to do our best to find it this time.

“We start on equal footing, the result is against us. But we have already shown to have the qualities to have our say in the match.”

Milan forward Zlatan Ibrahimović is suspended for the match, although the Sweden international is recovering from injury so wouldn’t have been available anyway. Midfielder Samuel Castillejo is also suspended as is defender Theo Hernández.