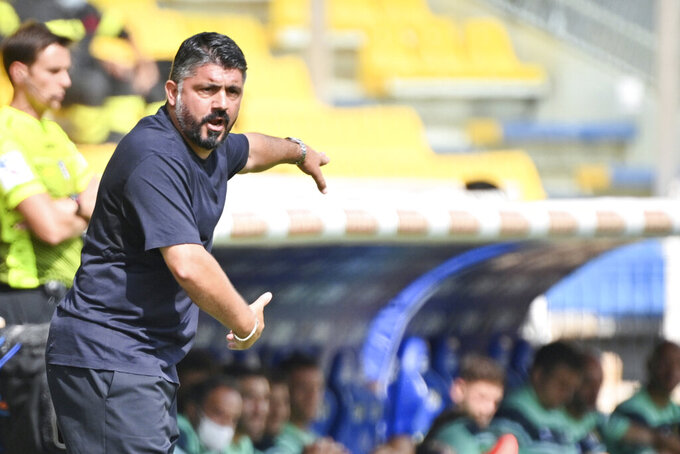 Napoli's coach Gennaro Gattuso gives directions to his players during the Serie A soccer match between Parma and Napoli at the Ennio Tardini stadium in Parma Sunday, Sept. 20, 2020. (Massimo Paolone/LaPresse via AP)

MILAN (AP) — Andrea Pirlo got his coaching career off to a winning start as Juventus beat Sampdoria 3-0 in Serie A on Sunday.

Dejan Kulusevski scored early in his debut and second-half goals from Leonardo Bonucci and Cristiano Ronaldo sealed the result on a day which saw fans return to Serie A stadiums.

“They are great players and I am so confident because I see every day quality players who are working toward the team in order to improve,” Pirlo said.

"Of course, we have just started and we have time to improve, but the commitment of the players to give it all to the team is there and that gives me a lot of comfort.”

It was a positive day for debutants as Weston McKennie — the first American to play for Juventus — had a hand in Bonucci’s goal and also sparked a move which led to Ronaldo hitting the crossbar.

“McKennie arrived having already started preseason training in Germany, so is in better shape than some others," Pirlo said. “He did well. He made a few errors but it was the first game, we can forgive him for that.”

Juventus is bidding for a record-extending 10th straight Serie A title but has an unproven coach in Pirlo. The former midfield great was handed his first coaching job last month when he was put in charge of Juventus’ under-23 team, which plays in Serie C. But he had not led a game before he was promoted to replace the fired Maurizio Sarri.

Juve played from the start with an intensity which had been lacking for much of last season and took the lead in the 13th minute.

Ronaldo burst into the box and was stopped by a tackle but the ball fell to Kulusevski and the former Parma midfielder curled it into the bottom left corner.

McKennie almost doubled Juve’s lead shortly before the break but he fired narrowly over.

It took Juventus until 12 minutes from time to get its second. Sampdoria goalkeeper Emil Audero did well to keep out McKennie's effort from close range but Bonucci tucked away the rebound.

Ronaldo, who scored 31 league goals last season, managed to get off the mark for this campaign in the final minutes of the match as he ran onto Aaron Ramsey’s throughball and placed a precise drive into the bottom left corner.

“It’s a fantastic night," Kulusevski said. "It wasn’t that easy but we got the three points and I scored a goal. It’s best to have scored in the first game, so I don’t have to think anymore about getting off the mark now.

“Pirlo as a coach is calm. He believes a lot in his players and in me. He lets me play and gives me so much confidence."

Dries Mertens and Lorenzo Insigne helped Napoli to a 2-0 win at Parma earlier Sunday in a match that marked the return of fans to Serie A stadiums.

Fans were present for the first time since Serie A restarted during the coronavirus pandemic after the government agreed on Saturday to allow up to 1,000 fans into stadiums.

The supporters had to wear masks and follow social distancing regulations, while they also had their temperature checked upon entering the stadium.

They had little to cheer in the first half with just one shot on target.

The intensity increased after the break and Napoli was further transformed when new signing Victor Osimhen was brought on in the 61st minute.

The forward was involved in the opener two minutes later when he pressured Parma's Simone Iacoponi in the penalty area. That caused the defender to head Hirving Lozano’s cross straight at Mertens who drilled it into the bottom right corner.

Insigne did score in the 77th minute and Osimhen was again involved. Parma goalkeeper Luigi Sepe got a hand to Lozano’s cross that was directed at the Nigeria forward but could only palm it straight at Insigne, who fired in the rebound from close range.