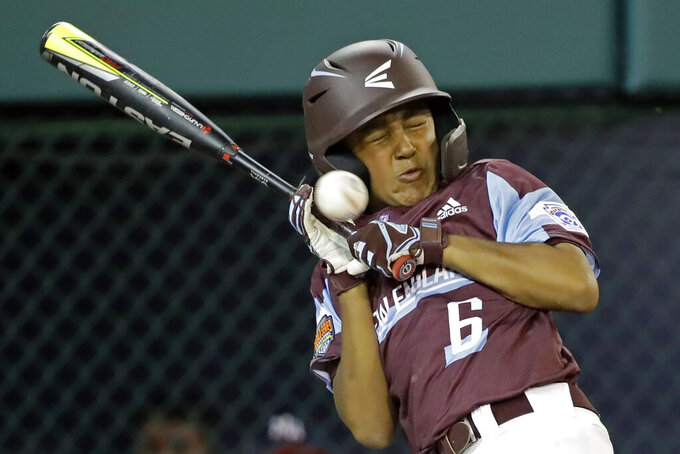 FILE - Barrington, R.I.'s Miles Fontaine is hit by a pitch from Elizabeth, N.J.'s Derek Escobar during the fourth inning of a baseball game at the Little League World Series in South Williamsport, Pa., in this Tuesday, Aug. 20, 2019, file photo. New Jersey won 2-0. The Little League World Series is planning to return in 2021 after last year's edition was canceled due to the COVID-19. (AP Photo/Tom E. Puskar, File)

A year after the COVID-19 pandemic forced the Little League World Series to be canceled, organizers are hopeful the late-summer Classic will return this August.

“We are planning as if we are going to have a tournament season,” said Steve Keener, the president and CEO of Little League International.

A plan that must include figuring out a way to safely bring together players from all over the globe. Little League has established a Pandemic Response Commission dedicated to figuring out how to pull off the two-week spectacle in Williamsport, Pennsylvania.

“Playing the game itself is the easy part,” Keener said. “We can do all that. It’s the travel, it’s the housing, how many people can attend?”

Answers Kenner hopes to have a better handle on by mid-May. The World Series is the pot of gold at the end of the rainbow. More pressing is finding a way to get leagues across the United States and the world back on the field after the pandemic forced the cancellation of some seasons and the postponement of others in 2020.

Keener said the organization's two-pronged goal this spring is to help out leagues and families who are experiencing financial distress as a result of the pandemic.

The “ Lift Your League ” fundraising drive began Monday. It's a Go Fund Me of sorts for leagues across the country. More than 600 leagues in 44 states have signed up for the drive, which lets people direct donations to specific leagues.

Little League International pointed to research that indicates 20% of its potential players will not be able to afford to play this season. Lift Your League will allow leagues to lower registration costs, possibly alleviating the financial burden.

The organization has also directed around $1 million from a grant to 9,000 families across the country as part of the Little League Call-Up Grant in association with T-Mobile. Keener said just under $1 million remains in the grant for families in search of assistance.

While daily COVID-19 case counts are easing off their midwinter highs and vaccines are becoming more accessible coast-to-coast, not everyone is rushing to register to play. Kenner estimated participation is down about 20% from 2019, though he added some states like California are still under highly restrictive quarantine measures.

“I think we’d be naive to think there won’t be a short-term impact,” Keener said.

Still, he believes interest in Little League and other youth sports will return as some semblance of normalcy returns over the next 18 months.

That's down the road. The next five months will be about helping millions of players get back onto the field and — Keener hopes — the best of the best invading north-central Pennsylvania in August.

“It’s going to be a big test but at the end of the day, the people who have been counseling ... tell us it’s better to have something to dream about, to look forward to,” he said. “Every 11-12 year-old kid playing Little League this year thinks about ending their summer in Williamsport.”