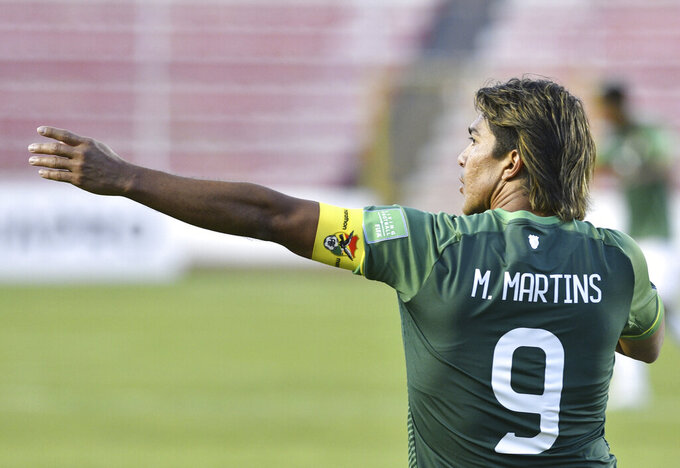 LA PAZ, Bolivia (AP) — CONMEBOL suspended Bolivia striker Marcelo Martins for one match and fined him $20,000 on Friday for criticizing the Copa America being played in Brazil.

CONMEBOL's disciplinary commission also warned Martins that he could face a one-year suspension if he offends again.

The Bolivian Football Association announced the sanctions on Twitter.

Martins was one of three Bolivia players who tested positive for COVID-19 last Saturday, the day before the tournament opened. The infection prevented him from playing in the 3-1 loss to Paraguay on Monday.

The following day, he attacked CONMEBOL on social media after reports of dozens of people infected with the virus in connection with the tournament. The case count had risen to 66 on Thursday. The Copa America was switched at the last minute to Brazil, where the COVID-19 known death toll is expected to pass 500,000 this weekend.

“Thanks to you of CONMEBOL for all this. All the fault is on you. If a person dies what will you do? What matters to you is only money. Aren't the lives of players worth anything?" Martins wrote on Instagram.

He apologized on Wednesday, blaming the criticism on his communications team. He wasn’t expected to play on Friday against Chile because of a mandatory isolation.

Five out of 10 teams at the Copa America have reported COVID-19 cases: Bolivia, Venezuela, Colombia, Peru and Chile.