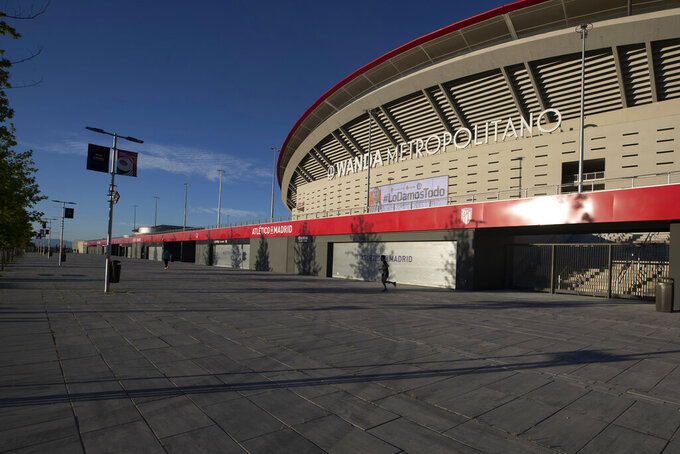 A man jogs past Atletico Madrid's Wanda Metropolitano stadium in Madrid, Spain, Tuesday, May 5, 2020. The Spanish soccer league aims to restart in June without spectators. It's new compulsory protocols say all players, coaches and club employees must be tested for COVID-19 coronavirus before training resumes, then regularly after that. All clubs' training facilities must be properly prepared and disinfected before players can start practicing individually. (AP Photo/Paul White)

MADRID (AP) — Players from Spanish soccer club Elche did not return to practice on Wednesday as a protest against reduced salaries.

The players for the second-division club were supposed to practice at the team’s stadium but decided to keep training at home to show their discontentment with the team’s decision not to lift the furloughs that had been put in place because of the coronavirus pandemic.

Players want to resume earning full salaries now that they are back to training and the league is expected to restart.

The players practiced normally on Tuesday. The club from southeastern Spain said it was negotiating with them.

Like most clubs in Spain, Elche used government furloughs to reduce its labor costs during the pandemic. Players had their salaries — and working hours — reduced by 70%.

Club CEO Patricia Rodríguez told Spanish local radio network COPE she was surprised with the players' decision because the club had already made them an offer to adjust their salaries.

She said players are not being required to work overtime under the furlough conditions.

“Even though they are going to the stadium, they are only exercising for about 45 minutes, which is within the reduction stipulated by the furlough,” she said.

Soccer players in Spain are currently allowed to undergo individual training sessions at their team's training camps, with longer group sessions and full squad practices expected in the coming weeks if the pandemic doesn't get worse.

Rodríguez said that when players start working for longer periods, the furlough conditions will be adjusted. She said the coaching staff had already requested changes in their furloughs because they are having to put in more time, as players are practicing at different periods during the day.

“This is something that we all need to discuss,” she said. “The players already had an offer on the table before this happened.”

It was Elche coach José “Pacheta” Rojo who told the club about the players’ decision not to practice on Wednesday.

The Spanish league's first and second divisions are expected to resume on June 12.

Elche was sixth in the 22-team second-division standings when the competition was suspended after 31 matches.

Players from first-division club Eibar recently said they were afraid of returning to practice amid the pandemic, expressing concerns about getting infected and infecting their family members.

Third-division club Atlético Baleares on Wednesday threatened not to play unless the Spanish soccer federation provided safety guidelines for clubs outside the first and second divisions, like the Spanish league did for the top two tiers.

“We are not going to put our employees in danger,” team director Guillermo Pisano said.

Players from clubs in the first and second divisions have been training individually under strict safety guidelines since last week, when hard-hit Spain loosened lockdown measures that had been in place since mid-March.