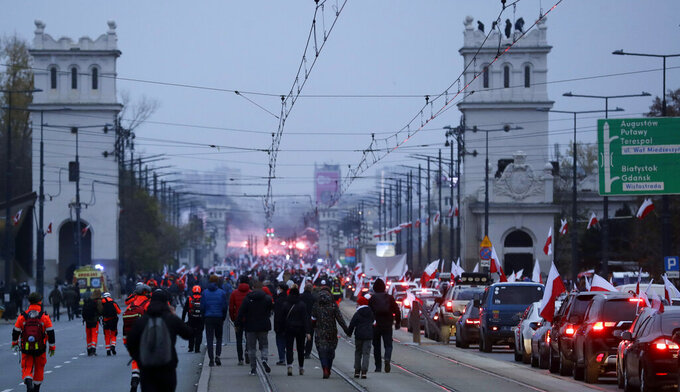 People take part in an annual Independence Day march organized by far-right groups, in Warsaw, Poland, on Wednesday, Nov.11, 2020. The march that marks Poland's sovereignty regained after World War I has often led to clashes with opponents. This year due to coronavirus and social distancing, the march took place in cars and motorbikes. (AP Photo/Czarek Sokolowski)

WARSAW, Poland (AP) — Members of Poland’s right-wing government have condemned leaders of an annual far-right march in Warsaw for having failed to prevent violence and injuries.

The Independence Day march Wednesday was planned to be held in cars and on motorbikes, to observe pandemic-era social distancing. But it was joined by an aggressive crowd on foot that clashed with the police, causing injuries and allegedly setting an apartment on fire with a firecracker.

He said people from across Poland took part in the trouble.

Amid general outrage, some government politicians blamed the violence on far-right organizers who allowed people to march on foot and even joined in themselves.

“This is really sad that despite the assurances from the organizers ... it turned out in the end that they also walked in the march on foot. ... This should not have happened, said Blazej Spychalski, spokesman for President Andrzej Duda.

Organized by far-right groups, the massive Independence Day marches have often led to clashes with left-wing groups and the police in the past.