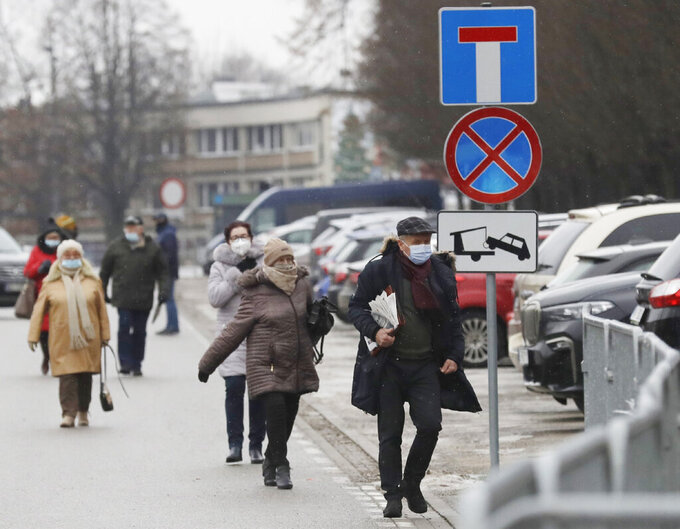 Elderly people arrive to be vaccinated against COVID-19 at the temporary hospital at the National Stadium in Warsaw, Poland, on Monday, Jan. 25, 2021. Overload of online registration system and reduced deliveries of the Pfizer vaccines are causing delays in the national inoculation procedure that currently aims at vaccinating people aged over 70. (AP Photo/Czarek Sokolowski)

WARSAW, Poland (AP) — Poland’s president on Monday expressed understanding for the “despair” of people who are opening their businesses in defiance of the anti-COVID-19 lockdown, but said they still must be punished for breaking government-ordered restrictions.

In comments published Monday, Andrzej Duda was reacting to the swelling nationwide #OtwieraMY (We Are Opening) movement of thousands of business owners opening their restaurants, hotels, ski lifts, fitness centers and similar businesses to avoid going under as a result of the prolonged social distancing and lockdown, recently extended through January.

“I can understand the impatience and often even the despair of people, who see the work of their entire lives falling apart," Duda said in an interview for the conservative weekly “Sieci.”

“Punishing people who are desperate is a terrible must,” Duda said, but added, however, that the regulations “have to be enforced.”

He appealed "to all for endurance and common sense.”

The government has warned those planning to or breaking the lockdown that they will be cut from the financial aid and exemptions from various dues it is offering if they go ahead with their action. Sanitary authorities are also fining unlocked businesses.

But business owners say the government help falls far short of their needs.

The #OtwieraMY movement describes itself as being an answer to a “crisis provoked by politicians” that it says is much more dangerous than the pandemic.

Social media is filling with videos and images from across Poland of crowded parties at clubs and bars. In some of them, reportedly from last weekend, people are chanting anti-government slogans. The gatherings exceed by far the limit of five people per meeting.

Expert on viruses, Tomasz Dzieciatkowski, said such disrespect for COVID-19 regulations amounts to endangering the health and life of those gathered and of their families at home.

Business owners point to two recent court rulings waiving fines against businesses that operated during the previous lockdown, in the spring of 2020. The courts said that temporary government regulations then were void and against Poland’s Constitution.

Some nightclub owners have already sued the government for damages.

Michal Maciag, who owns the Piw Paw pub in Warsaw, said he has had to close three other locations due to the lockdowns and dismissed all but two of his 39 employees.

He said the police frequently patrol outside the pub.

“The situation is extremely difficult, we have no means to continue, to serve our clients, but we have to pay our high utility bills,” Maciag said.

Poland, a nation with a population of around 38 million, has registered almost 1.5 million coronavirus infections and more than 35,000 deaths.

A recent opinion poll by the IBRiS polling center shows that 70% of people support hotels and restaurants breaking the lockdown to save their businesses, while 75% of people support the opening of ski lifts. But only 24% feel the same about night clubs.

The survey Jan. 19 on 1,100 adult respondents had a margin of error of plus or minus 3 percentage points.

In Germany, a similar initiative called #wirmachenauf (“We’re opening up”) called for businesses to open earlier this month in defiance of the country’s lockdown. The campaign appears to have fizzled, however. Polls in Germany still point to widespread support for coronavirus restrictions.