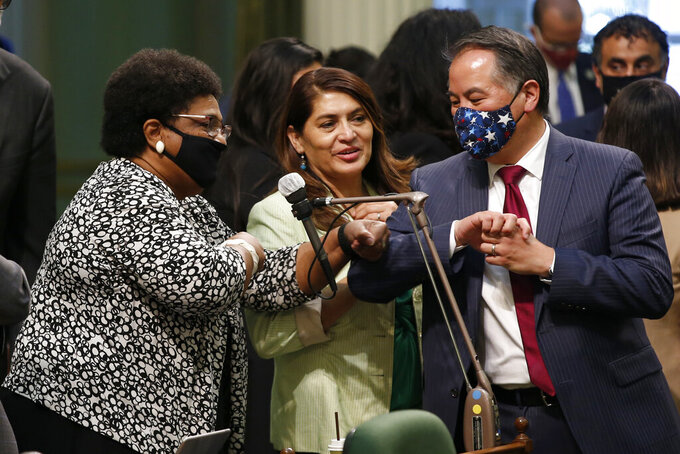 FILE - In this June 10, 2020, file photo, Assemblywoman Shirley Weber, D-San Diego, left, receives congratulations from fellow Assembly members Sharon Quirk-Silva, D-Fullerton, center, and Phil Ting, D-San Francisco, after the Assembly approved her measure to place a constitutional amendment on the Nov. 3, 2020 ballot to let voters decide if the state should overturn its ban on affirmative action programs, at the Capitol in Sacramento, Calif. A national awakening on race has driven a well-funded campaign in California to reinstate affirmative action in public hiring, contracting and college admissions. Voters are deciding Tuesday whether to allow the nation's most populated state to grant preferential treatment based on race and gender. (AP Photo/Rich Pedroncelli, File)

SAN FRANCISCO (AP) — The campaign to reinstate affirmative action in overwhelmingly Democratic California had money, momentum and big-name backers, including Black celebrities Issa Rae and Ava DuVernay, but voters in the most populated state rejected the measure.

Supporters of Proposition 16 signaled before Election Day that the race would be tight, saying they didn't have enough time to sway voters on the touchy topic of government granting preferences in public hiring, contracting and college admissions based on race, ethnicity or gender even during a national reckoning on race.

The measure was passing in Los Angeles and five San Francisco Bay Area counties that are liberal and losing everywhere else. With more than 11 million votes tallied, 56% opposed Proposition 16 as of Wednesday.

James Taylor, a political science professor at the University of San Francisco, said the proposition suffered from several factors: the coronavirus pandemic and racial justice protests that have left voters stressed and uncertain; the lack of a high-profile champion such as Democratic vice presidential nominee Kamala Harris, and younger voters who may not know much about the issue.

Then again, the vote is in keeping with a state that has welcomed cheap labor of all colors but then demanded they “go back" when no longer needed, Taylor said. California was founded as a free state but sanctioned ownership of Black people.

“It's both a liberal bastion, but it’s also a place where you had Los Angeles burning in 1965 and the Black Panther" party founded out of frustration in Oakland, Taylor said. “That duality and that duplicity is part of the character of California."

Supporters said in a statement Wednesday that they would wait for every vote to be counted but vowed that California would lead the country in rooting out barriers to advancement. The campaign acknowledged needing to “enlist more champions in the fight against structural racism and gender discrimination."

Democratic lawmakers placed Proposition 16 on the ballot in June following the death of George Floyd, a Black man, by Minneapolis police and the nationwide protests that followed. They pointed to his death as evidence of the barriers that hold back Black Americans and other people of color.

“I also think that there’s a lot of conversation that needs to be had among folks who should be allies on this," Abdullah said. “We were able to pull many leading Asian voices, but there’s a narrative for a long time that Asians would lose, so we just have to do more solidarity work there."

Lawmakers figured the time was right with an electorate that is less Republican and more diverse than in 1996, when California voters banned affirmative action through a ballot measure pushed by then-Gov. Pete Wilson, a Republican.

Today, Latinos make up 39% of the state’s population, followed by white people at nearly 37%. Asian Americans are almost 17%, and African Americans make up less than 7%.

Lanhee Chen, a fellow at the conservative Hoover Institution at Stanford University, was blown away by the “resounding defeat" of the measure given widespread backing from establishment institutions and the state's liberal politics.

“I think it was doing well with white college-educated liberals and ... you would have found that’s pretty much it. Asians were deeply divided, probably deeply strongly against it, and Latino and African American voters were relatively indifferent," he said.

Supporters raised $31 million and included chambers of commerce, tech companies, sports teams and Democratic leaders who said affirmative action programs are critical to undoing generations of systemic racism and sexism. The University of California expressed disappointment in a statement Wednesday.

“The people are saying we want to be treated as equals,” said Ward Connerly, the African American businessman who led the 1996 campaign to prohibit the state from granting preferences or discriminating against a person due to race or gender.

“This was a resounding win for equality under the law. We were vastly outspent and opposed by the California political establishment and much of the media," their statement said.

Wendy Vo, a 48-year-old programmer, said Tuesday outside a vote center in Fountain Valley that she voted against the measure because she feels ability is more important than diversity.

“It should be based on merit,” she said. “We should always see everybody the same.”