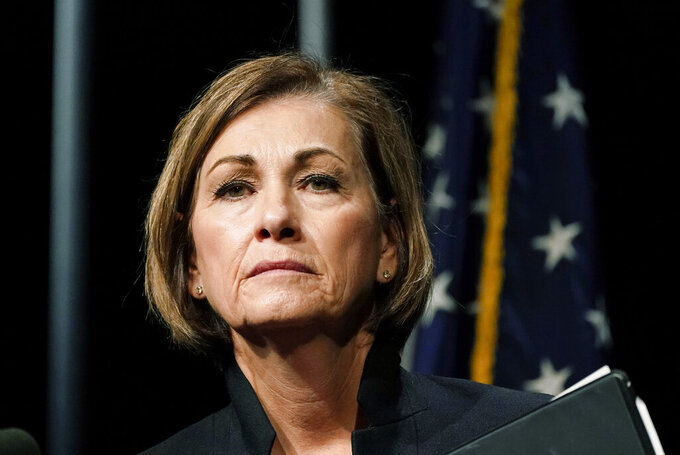 FILE- In this Nov. 19, 2020, file photo, Iowa Gov. Kim Reynolds appears during a news conference in Johnston, Iowa. A new disclosure report shows an owner of a large pork production company that disproportionately benefited from an Iowa coronavirus aid program recently donated $25,000 to Reynolds' campaign last month. Mary Ann Christensen, board member of Christensen Farms and part of the family that owns the company, made the donation Dec. 29, according to the filing made public Tuesday, Jan. 19, 2021. (AP Photo/Charlie Neibergall, File)

Mary Ann Christensen, board member of Christensen Farms and part of the family that owns the company, made the donation Dec. 29, according to the filing made public Tuesday.

It was among the largest campaign donations that Reynolds received in 2020 and far more than the $1,000 that Christensen gave the governor in 2017.

Christensen Farms received $1.86 million through the Iowa Disposal Assistance Program, 72% of the pandemic aid awarded in its first rounds, an Associated Press review found. The program, announced by Reynolds last spring, reimbursed farmers for costs related to hogs they euthanized after COVID-19 disrupted their supply chain.

Reynolds disclosed her calendar year 2020 campaign donations and spending Tuesday as required under Iowa law, revealing some ties to executives and companies that have received state aid and contracts during her tenure. She raised $1.6 million in all.

The filing shows Reynolds returned a $10,000 donation from Republican activist and businessman Anthony Marlowe on Nov. 20, one day after her administration picked his Iowa City telemarketing company for a $2.3 million contact-tracing contract.

Marlowe, whose company had pitched its services to the state since the beginning of the pandemic, made the donation in October. In November, the Iowa Department of Public Health announced an emergency bid for the contract during a surge in virus cases and within days selected Marlowe's firm out of 13 applicants, saying it scored the highest.

Reynolds’ campaign in 2020 used one of Marlowe’s other companies, Mass Markets, as a vendor, paying it $1,600 for professional services.

Reynolds’ campaign made purchases for office supplies and printing from Des Moines-based Competitive Edge, Inc. in February and March. In April, the state awarded Competitive Edge the first of several no-bid contracts worth millions of dollars to supply personal protective equipment including gowns and masks, products it had never marketed before.

Its owner, David Greenspon, is a longtime Republican donor and campaign vendor who was awaiting trial at the time on a felony charge stemming from a November 2019 domestic assault. He pleaded guilty to an aggravated misdemeanor and was sentenced to probation in July.

In October, Reynolds received a $25,000 donation from Dave North, executive chairman of Sedgwick, a Tennessee company that in 2019 landed a six-year, $7.9 million contract to continue administering workers’ compensation claims for state workers.

Reynolds faced criticism during her 2018 campaign for accepting a free flight to an Iowa State football game on a Sedgwick corporate plane. North has been among the largest donors to Reynolds during her career.

The 165-page list of donations shows Reynolds continued to receive major support from leaders in the pork industry, which she helped during the pandemic by working to keep meatpacking plants open. Iowa Select Farms owner Deb Hansen was the governor's largest individual donor, giving $50,000 in September.

Critics asked the governor to temporarily close meatpacking plants for safety reasons last spring, but she warned that doing so would devastate hog farmers and the nation's meat supply.

Several plants suspended operations after outbreaks among their workers and some farmers had to euthanize their hogs when they had no place to sell or space to hold them.

Reynolds and Agriculture Secretary Mike Naig launched the disposal program in May, reimbursing farmers $40 for each market-ready hog up to 225 pounds that they euthanized. The governor eventually approved up to $9 million for the program but only $4.8 million has been used, due to lower than expected demand.

Only a tiny fraction of Iowa’s estimated 6,200 pig farms applied for payments. But Christensen Farms, based in Sleepy Eye, Minnesota, received aid for disposing of 46,599 euthanized hogs between May 1 and June 5, six times as many as any other company during that period.

The company said in July that most of its operations were located in Iowa, including 200 partner farms, and that it was grateful for the state’s support during a period of “prolonged and unprecedented uncertainty.”