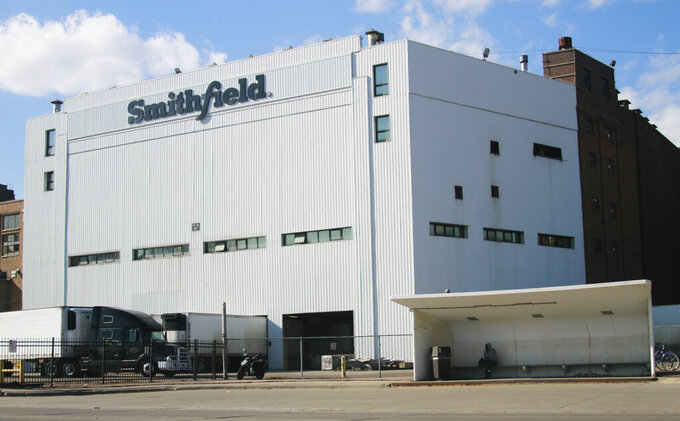 FILE - This April 8, 2020, file photo shows the Smithfield pork processing plant in Sioux Falls, S.D. A group representing pork producers urged the federal government Tuesday, May 25, 2021, to let them continue an effort to speed up the processing of pigs into bacon and ham despite a union's claim that the increased volume endangers workers. (AP Photo/Stephen Groves, File)

DES MOINES, Iowa (AP) — A group representing pork producers urged the federal government Tuesday to let them continue an effort to speed up the processing of pigs into bacon and ham despite a union’s claim that the increased volume endangers workers.

The National Pork Producers Council, an industry trade group, sent a letter to the U.S. Department of Agriculture calling on the agency to appeal a ruling by a federal judge that it argued would needlessly slow production and hurt farmers still recovering from problems associated with the coronavirus pandemic.

“The U.S. pork production system, the most advanced in the world, is characterized by robust competition, innovation and efficiency. With the stroke of a judge’s pen, the lives of many hog farmers will be upended if this misguided ruling takes effect,” said NPPC President Jen Sorenson, communications director for Iowa Select Farms, the state's largest pork producer based in West Des Moines.

The United Food and Commercial Workers Union, which represents 33,000 pork slaughterhouse workers, said the judge's ruling recognized that the USDA failed to consider worker safety when it finalized the faster production speeds.

UFCW International President Marc Perrone said in a statement that the USDA must conduct a comprehensive evaluation of the impact of increased line speeds on worker safety.

"UFCW is calling on every company in the pork industry to slow their line speeds so that we can keep our food supply secure and protect the brave men and women who produce the high-quality American-made pork that so many families rely on every day,” he said.

The latest conflict is centered on a federal rule initiated years ago but finalized by former President Donald Trump's administration in 2019 that would have enabled several more pork slaughterhouses to eliminate a limit on line processing speeds as early as July 1.

After the UFCW filed a lawsuit in federal court in Minnesota, U.S. District Judge Joan Ericksen struck down the line speeds rule, finding that the USDA acted arbitrarily and capriciously when it refused to consider the impact of faster line speeds on worker safety. On March 31, she ordered the rule to be vacated but delayed the effective date for 90 days to give the USDA and the industry “time to prepare for any operational change.”

Pork processing plants in Hatfield, Pennsylvania; Coldwater, Michigan; Freemont, Nebraska and Austin, Minnesota, have been working with the faster line speeds under a pilot project for years and a plant in Guymon, Oklahoma, began faster speeds in 2019. Several others were expected to adopt faster speeds but plans were delayed by the pandemic.

The National Pork Producers Council said the judge's ruling, if left unchallenged, would force all the plants already operating at faster speeds to return to the previous maximum line speed of 1,106 hogs per hour beginning June 29. The plants that had been allowed to lift line speeds had processed as many as 1,450 hogs per hour.

The NPPC said the judge's ruling will cut U.S. pork packing plant capacity by 2.5% and result in more than $80 million in reduced income for small hog farmers, according to an analysis conducted for the group by Iowa State University agricultural economist Dermot Hayes.

The NPPC asked the USDA to appeal the ruling, seek a stay while the appeal is considered and request the agency pursue a fast-tracked rule that would allow higher line speeds.

The USDA Food Safety and Inspection Service said in a statement that the U.S. Department of Justice Office of the Solicitor General will decide whether to appeal the decision “and, to date, no determination has been made.”

Caught in the middle of the dispute are hog farmers who are encouraged to raise more pigs to feed the constant demand by U.S. consumers and a rapidly growing export market.

They were caught off-guard during the worst of the coronavirus pandemic last year when some meatpacking plants were forced to close due to virus outbreaks among workers. That caused a backup of hundreds of thousands of hogs on farms that couldn't be slaughtered. Efforts to sell directly to consumers or process hogs at small slaughterhouses for donation to food banks weren't enough to avoid euthanizing some animals on the farm.

Hayes said plant managers told him they would likely respond to the slower line speeds by boosting operating hours by extending shifts or adding weekend shifts in an effort to avoid another backup of hogs.

He said added work hours could present its own set of worker safety issues. Longer shifts and weekend work would likely lead to some workers quitting, he said.

Regardless of the industry response, Hayes said an overabundance of hogs will again drive down prices and hurt farmer profitability.

“This packer response will ensure an orderly fall market and make it unlikely hogs will have to be euthanized. However, this adjustment will require a price incentive and it will come at the expense of hog farmers,” he said.

This story has been corrected to show in the 1st paragraph that the National Pork Producers Council represents pork producers, not pig farmers.