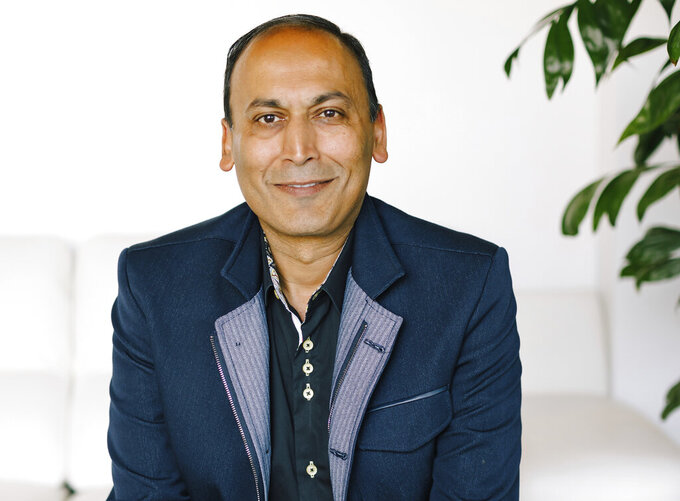 This photo provided by Poshmark shows Manish Chandra. Shares of Poshmark soared in their debut trading in the public markets Thursday, Jan. 14, 2021, a testament to the strength of the online marketplace for second-hand goods even during a pandemic. The company, founded in 2011 by Chandra, marked its debut on the Nasdaq Stock Market and is listed under the ticker POSH. (Jen Kay/Poshmark via AP)

NEW YORK (AP) — Shares of Poshmark Inc. more than doubled in their stock market debut Thursday, a testament to investor enthusiasm for the online marketplace for second-hand goods.

Late Wednesday, the initial public offering of 6.6 million shares was priced at $42 a share, raising about $277.2 million before underwriting fees. The stock, trading on Nasdaq under the ticker symbol “POSH,” ended Thursday at $101.50.

Poshmark was founded in 2011 by Manish Chandra and now joins a growing number of e-commerce sites like Doordash and Airbnb that have gone public during the pandemic. Online pet supplies retailer Petco returned to the public market Thursday.

“It's a great validation,” said Chandra during a phone interview with The Associated Press on Thursday, referring to the stock's surge. “We are excited about where we are, but even more excited about the future.”

Poshmark plans to use the proceeds from the public offering to expand into more international markets beyond Canada. It also plans to add more merchandise categories beyond clothing, home and beauty, while investing in more technology.

The company based in Redwood City, California, is hitting the public markets as the coronavirus keeps battering traditional retailers, particularly those operating at malls. But the popularity that many online second-hand sellers like Poshmark enjoyed before the virus has continued.

Poshmark has benefitted from shoppers' accelerated shift to online and customers' steadfast focus on second-hand goods as they become more conscious about the environment. Poshmark is also a social marketplace where users buy and sell directly with each other and interact, something that has resonated with many people in isolation. Another bright spot: Customers are increasingly using sites like Poshmark to earn extra income as they clean out their closets in an uncertain economy.

Still, Chandra said that the pandemic has dampened the demand for dressier items as shoppers are staying close to home and not going to parties and other events. However, he said that Poshmark has been quick to reconfigure the clothing offerings to focus more on casual items. And Chandra is optimistic that demand for dressier items will come back once the pandemic recedes.

Poshmark, which has 70 million total users, achieved profitability for the first time during the quarter ended June 30, according to its prospectus filed with the Securities and Exchange Commission.

While shoppers for years have been buying and selling used discounted designer items at thrift shops and on eBay, this latest generation of secondhand online retailers like Poshmark make the shopping experience easier, with new technology and services.

In fact, the total resale market reached $28 billion in 2019 and should increase to $64 billion by 2024, according to research from GlobalData commissioned by thredUP, a rival secondhand site.

ThredUP has been expanding into home decor with items including bedding and bath. It also opened several stores. The RealReal, an online seller of authenticated, consigned luxury goods, went public in 2019. The RealReal offers a “white glove” service where consignors, those who are selling their used designer goods, make an appointment with one of its luxury managers and receives a complimentary consultation at their home.

Poshmark holds a vast array of goods, from a $20 casual dress to a $1,000 luxury handbag. But it’s a marketplace that's similar to eBay, which allows sellers to sell and send their merchandise directly to buyers. Poshmark charges a flat 20% fee of the final price for sales $15 and more or a flat fee of $2.95 for sales under that price.

Poshmark also can rein in costs because it doesn't hold the inventory. For items that are priced at $500 or more, goods need to be sent to Poshmark for authentication.

Poshmark has seen financial benefits from being a social marketplace. In 2019, its active users spent an average of 27 minutes a day on Poshmark’s marketplace, browsing, shopping, buying, selling and connecting with each other via 20.5 billion social interactions, according to the filing.

In 2019, 87% of items purchased on Poshmark were preceded by a like, comment, or offer on its marketplace, according to a company filing.