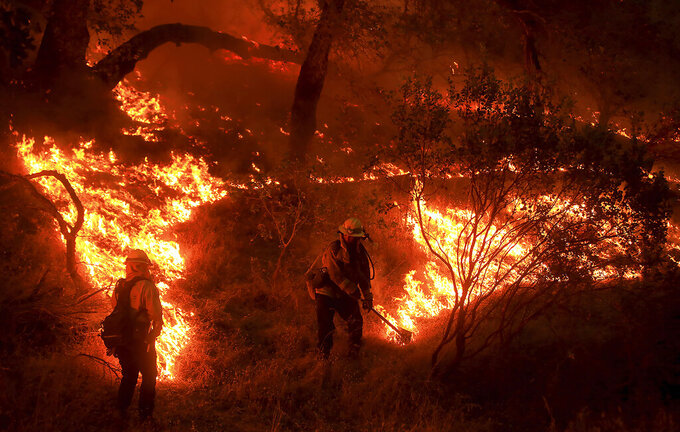 At a cooling center in Sacramento, Newsom applauded industries, business and residents for driving down energy usage Monday but warned that temperatures and energy demands remain high into Wednesday as the state swelters under a heat dome.

“We’re in a critical 48 hour period, critical period this evening and we’re doing everything in our power to understand the root causes of this," and to mitigate future rolling blackouts, he said.

Earlier in the day, Steve Berberich, president and CEO of the California Independent System Operator, had praised customers for astonishing conservation efforts that kept the power on Monday night.

He said operators were stunned by the “dramatic flattening" of consumption at 3 p.m. Monday after his office warned that as many as 3.3 million homes and businesses would be affected by rotating, two-hour outages. The order never was issued and the warning was canceled.

“It was stunning the conservation response that we got," he said Tuesday. “I know it’s hot and I know it’s hard, but those same actions today can make all the difference in the world.”

The state is in a days-long heatwave that has stressed the electrical system and resulted in rolling blackouts over two nights last weekend. The strong ridge of high pressure responsible for the heat wave was expected to weaken, but excessive hot weather was forecast for the weekend as families stay at home because of the coronavirus pandemic.

Newsom declared a statewide emergency Tuesday, saying crews were battling some 30 large fires, with some sparked by lightning. “We are deploying every resource available to keep communities safe as California battles fires across the state during these extreme conditions," he said.

Evacuations were in effect or growing in the Napa County wine country north of San Francisco Bay, near Salinas in Monterey County, around Oroville Dam north of Sacramento and near the Nevada state line north of Lake Tahoe.

“Our vineyard workers had to evacuate very quickly. And we heard this morning that there was zero containment, so that’s scary. It’s very steep, so I know it’s hard for firefighters to get up there,” said Dawn Phillips, who works in customer service for the winery.

In Southern California, evacuations continued for a week-old fire in the mountains of northern Los Angeles County. Dynamic weather churned up thunderstorms bringing the double threat of more lightning-sparked fires and flash floods.

California ISO issued the first rolling blackouts in nearly 20 years on Friday, resulting in the state’s three biggest utilities — Pacific Gas & Electric, Southern California Edison and San Diego Gas & Electric — turning off power to more than 410,000 homes and businesses for about an hour at a time until the emergency declaration ended 3 1/2 hours later.

Former Gov. Jerry Brown called the rolling blackouts “a kerfuffle, not a crisis,” adding that California’s bigger challenge will be reducing its reliance on fossil fuels as climate change continues to warm the planet and energy demands increase.

Berberich credited large power users, businesses and residential customers for their good work. He initially said the state may be short 2,700 megawatts around 7 p.m. Tuesday, which is smaller than the 4,400-megawatt shortage projected for Monday. The shortage of 4,400 megawatts equates to about 3.3 million homes and businesses.

Later Tuesday afternoon, California ISO tweeted that consumer conservation was making a dent but that outages were still likely because of shortfalls.

“We’ve got to obviously look to smooth out the acuity of these heat shocks in anticipation that we’re going to experience many more of these in the next months, years, potentially decades going forward,” he said Tuesday.

Scorching weather has hit other Western states, making it harder for California to import extra power.

Associated Press writers John Antczak and Christopher Weber in Los Angeles and Kathleen Ronayne in Sacramento contributed to this report.