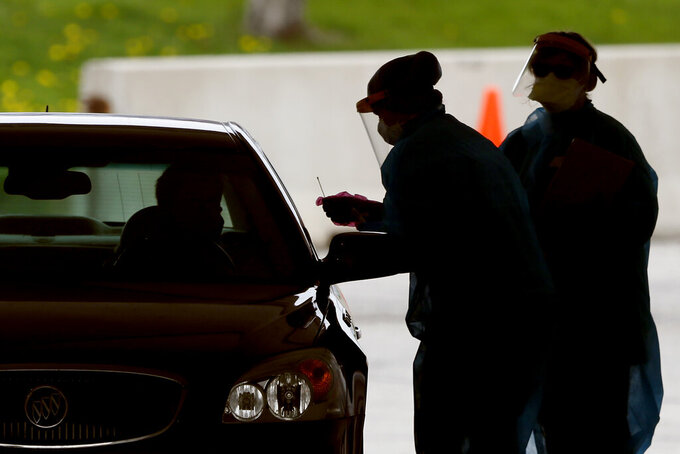 FILE - In this May 1, 2020, file photo, medical workers test a local resident at a drive-thru COVID-19 testing site in Waterloo, Iowa. Newly released records show the State of Iowa deployed "strike teams" to conduct rapid on-site coronavirus testing at 17 businesses in 2020, including some of the state's most powerful pork and beef companies. (AP Photo/Charlie Neibergall, File)

IOWA CITY, Iowa (AP) — When Gov. Kim Reynolds’ administration arranged coronavirus testing at the office of the governor’s biggest campaign donors, it was the first time in weeks and last time ever the state would deploy a testing team to a private business, newly released records show.

Iowa sent so-called “strike teams” to conduct rapid on-site testing at 17 businesses during the pandemic in 2020, including some of the state’s largest and most powerful pork and beef companies, according to long-delayed records released Monday.

About 40 other businesses were sent testing kits by the state or were assisted in getting employees tested at a nearby public Test Iowa site, according to data released by the Iowa Department of Public Health.

State Auditor Rob Sand, a Democrat, is looking into whether any companies received special treatment in getting strike teams at a time when nursing homes and some local officials were complaining of testing shortages and devastating outbreaks.

The Republican governor and her aides have rejected any suggestion that her supporters received favoritism and say they are proud of their work making testing available to the private sector to keep factories and workplaces open. She said in January that roughly 60 companies requested testing assistance and that all were accommodated, although the records show the majority weren't sent strike teams.

“Political support wasn’t a factor, ever,” the governor's spokesman, Pat Garrett, said Tuesday. “All these decisions are made in conjunction with public health based on the needs of a company that would come to us.”

A strike team conducted drive-thru testing for 33 employees at a corporate office for Iowa Select Farms on July 13, the first time in five weeks that such a team had been deployed and the last, according to the department's data.

Iowa Select is one of the nation's largest pork producers and owned by Jeff and Deb Hansen, who have given Reynolds roughly $300,000 in campaign donations and enjoyed a close relationship during her time in office. The company has acknowledged reaching out to the governor’s office to request testing for its West Des Moines office and charitable foundation employees after they had potential exposure to an infected person.

The records reveal that one of the first companies that received testing help from a strike team was Lynch Livestock, whose owner Gary Lynch has given more than $85,000 to Reynolds’ campaign and once purchased an afternoon with Reynolds at a 2019 Hansen family charitable auction. Forty-nine employees at Lynch Livestock, a pork company based in Waucoma, were tested April 22, the records show.

The same week, a strike team tested 855 workers at a Wright County pork processing facility owned by the Prestage family, which has given tens of thousands of dollars to Reynolds.

In early May, a team tested 244 employees at Stine Seed in Adel. Stine Seed spokesman David Thompson said the company had asked the governor’s office for guidance after some of its employees tested positive and was referred to the public health department. He said the company made a request to test all its workers in Dallas County, and more than 10 percent were positive. The testing results helped the company enact a mitigation plan that kept cases low, he said.

Reynolds also deployed the teams to some of the state’s largest meatpacking plants, where hundreds of workers would test positive for the virus. More than 4,700 employees at three Tyson Foods plants were tested through the teams in April. Iowa Select Farms is a major supplier of hogs to those plants.

Sand announced his inquiry into the state's use of strike teams in January after journalist Laura Belin reported that the governor fast-tracked testing for employees at a Waverly machine parts maker partially owned by major GOP donor Bruce Rastetter. Sand's spokeswoman said Tuesday the investigation is ongoing.

Belin obtained an email showing the county health department had been told its request for testing at GMT Corp. would likely be denied because only one employee was infected. But after Rastetter’s company contacted the governor directly, a strike team soon tested 200 workers there in May. None were positive.

A Bremer County administrator complained that the county’s request for testing for health workers and nursing home residents had been ignored “but a multi-million dollar corporation like GMT puts in a request and gets approved in a day.”

This story corrects the spelling of Stine.