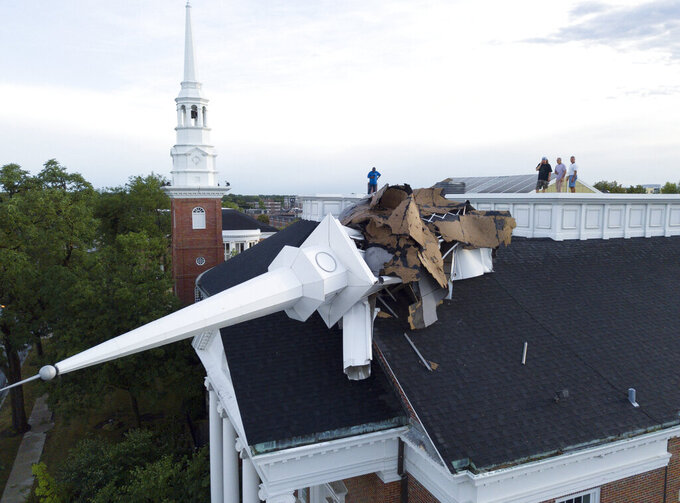 The steeple at College Church in Wheaton, Ill. was toppled during a storm Monday, Aug. 10, 2020, in the northwest suburbs of Chicago, Ill. Church officials check out the damage from the rooftop which also left several trees in the nearby park heavily damaged. (Mark Welsh /Daily Herald via AP)

IOWA CITY, Iowa (AP) — Hundreds of thousands across the Midwest remained without electricity on Tuesday after a powerful storm packing 100 mph winds battered the region a day earlier, causing widespread damage to millions of acres of crops and killing at least two people.

The storm known as a derecho tore from eastern Nebraska across Iowa and parts of Wisconsin and Illinois, blowing over trees, flipping vehicles and causing widespread damage to property and crops. The storm left downed trees and power lines that blocked roadways in Chicago and its suburbs. After leaving Chicago, the most potent part of the storm system moved over north central Indiana.

In Iowa, Gov. Kim Reynolds said early estimates indicate 10 million acres (4 million hectares) have been damaged in the nation’s top corn producing state and many grain bins were destroyed. That would be nearly a third of the roughly 31 million acres (12.5 million hectares) of land farmed in the state. The most significant damage is to the corn crop, which is in the advanced stages of development nearly a month away from the beginning of harvest.

“This morning I had a farmer reach out to me to say this was the worst wind damage to crops and farm buildings that he has ever seen across the state in such a wide area,” Reynolds said.

Satellite imagery shows extensive crop damage through about one-third of the center of the state from east to west.

“It’s incredibly devastating to see what’s happening to crops, and to structures all across the storm path,” Iowa Agriculture Secretary Mike Naig said.

Roger Zylstra, who has farmed in central Iowa near Kellogg since 1980, said that four of his hog barns lost their roofs, two of his machine sheds suffered significant damage and many of his corn acres were destroyed.

Zylstra, 69, said crop insurance will help, but that the financial hit will be devastating for many farmers.

“The question remains for all of us is, what happens in the next five or six weeks? How much can we salvage out of these fields?” Zylstra said. “I know that some people won’t survive this. But there’s a fair number of people that will figure out how to hang in there, and we’ll keep doing what we do.”

The high winds continued to damage crops as the storm swept into northwestern Illinois but the wind had weakened somewhat by that point. Information about the severity of the damage was still being gathered Tuesday, said Andrea Casali, a spokeswoman for the Illinois Farm Bureau.

In Fort Wayne, Indiana, Isabel E. Atencio died at a hospital after firefighters pulled her from debris inside her mobile home after high winds rolled it onto its side Monday night, officials said. Firefighters found the 73-year-old woman under debris inside her toppled trailer and discovered that she was clutching a 5-year-old boy believed to be her grandson, said Adam O’Connor, deputy chief of the Fort Wayne Fire Department. The boy had minor injuries.

“It’s awful. I was thinking about that all last night,” O'Çonnor said.

A derecho is not quite a hurricane. It has no eye, and its winds come across in a line. But the damage it is likely to do spread over such a large area is more like an inland hurricane than a quick more powerful tornado, according to Patrick Marsh, science support chief at the National Weather Service’s Storm Prediction Center in Norman, Oklahoma.

The storm began as separate thunderstorms in South Dakota before strengthening over Iowa. It held together for 770 miles (1,200 kilometers) over 14 hours before losing strength as it entered Western Ohio, Iowa State Climatologist Justin Glisan said. By the time the system reached Des Moines, wind gusts were clocked at more than 100 mph (161 kph) Glisan said.

The National Weather Service said the storm also spawned a tornado in northern Illinois near the Wisconsin state line that damaged buildings and trees in both states.

Iowa officials reported roofs torn off homes and buildings, vehicles blown off roads and hit by trees, and people hurt by flying debris. One death and dozens of injuries were reported in the state.

A 63-year-old bicyclist died after he was struck by one of several large trees that fell Monday on a bike trail outside of Cedar Rapids near Ely, the Linn County sheriff’s office said. Thomas Rowland of Solon, Iowa, suffered extensive injuries and died at the scene, the office said.

The Iowa Veterans Home also has extensive building damage and access was limited due to downed power lines. A nursing home in Madrid, Iowa, had a portion of the roof torn off, and six COVID-19 patients were evacuated while one staff member was taken to a hospital after a window blew out. The Iowa governor said 20 patients at a Newton nursing home were evacuated to a nearby church.

Meanwhile, three of the state’s drive-through coronavirus testing sites, in Cedar Rapids, Davenport and Marshalltown, sustained damage and were temporarily closed Tuesday, Reynolds said. She added that the closures would temporarily impact availability of testing but the state hoped to reopen them quickly. She said no testing samples appeared to have been damaged.

Utility officials in Iowa said it will likely take several days to restore power to everyone. Nearly 340,000 Iowa customers of MidAmerican Energy and Alliant Energy remained without power Tuesday afternoon. Another 33,000 in the Illinois Quad Cities region also lacked power.

Power and Internet outages were widespread in Iowa's three largest metropolitan areas, of Des Moines, Cedar Rapids and Davenport. The power outages were so extensive that at one point Monday, 97% of households in Linn County, which includes Cedar Rapids, were in the dark, Reynolds said.

Mediacom spokesman Thomas Larsen said Tuesday that roughly 340,000 customers are without Internet service in Iowa, Illinois and Indiana. He said the Cedar Rapids-Iowa City corridor of eastern Iowa was particularly hard hit due to its fiber ring being cut in multiple locations. Some customers will get their service back when their power is restored, while others will need additional repairs.