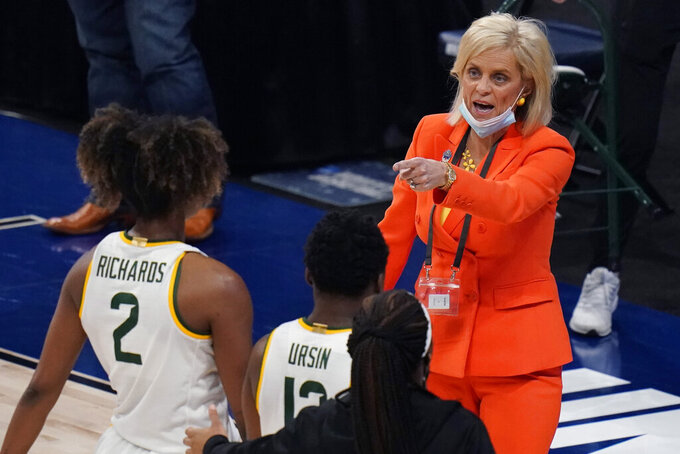 Baylor head coach Kim Mulkey, right, talks to her players during the first half of a college basketball game against Michigan in the Sweet Sixteen round of the women's NCAA tournament at the Alamodome in San Antonio, Saturday, March 27, 2021. (AP Photo/Eric Gay) 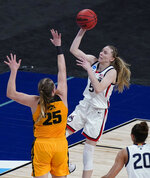 UConn and Baylor have dominated women's college basketball in recent years and will meet Monday with the winner advancing to yet another Final Four.

The Huskies (27-1) will be looking for the the program's 13th straight appearance in the showcase, 21st all-time and a 12th national championship.

The Lady Bears (28-2), the defacto defending champions after winning the title in 2019, will be looking for their fifth trip to a Final Four and a fourth title.

“I wish it was for the national championship and not a chance to get to a Final Four, because I think both programs are just elite, and it's a shame somebody has to lose,” Baylor coach Kim Mulkey said Sunday.

It is a sentiment echoed by UConn coach Geno Auriemma, who also believes the teams are playing too early in the tournament.

“I think they were underseeded,” Auriemma said. “Explain to me how they are a No. 2 seed. These things happen, I know. But I think they deserved to be an No. 1 seed, if you look around the rest of the tournament.”

The teams mirror each other in many ways, each having been built by their Hall of Fame coaches using similar formulas.

Both stress defense. Baylor is tops in the nation, allowing opponents to shoot an average of 32.3% from the field. UConn ranks fourth, with opponents shooting 33.3% from the floor.

Both also feature stars — UConn's Paige Bueckers and Baylor's Nalyssa Smith — supplemented by a supporting cast of other talented players who can take over games.

“Every team that competes for a championship and actually has won a championship has pretty much used that formula if they want to come back,” Auriemma said. “Now, if you are only trying to do it once and you're trying to give it one shot at, then maybe you don't have to do it this way. But if you want to be that kind of program that has a chance each year to put yourself in that situation, then that's how you have to do it.”

Some things to watch for when UConn at Baylor meet Monday in the Elite Eight:

Baylor's Smith has made 26 of her 33 shots in the Lady Bear's three games and went 11 of 11 from the floor in the team's overtime win against Michigan in the Sweet 16.

UConn freshman Aaliyah Edwards also has been on fire, averaging 18 points per game in the tournament, while hitting 22 of her 26 shots.

“If it wasn’t for Aaliyah Edwards, we wouldn’t be here today,” Auriemma said. “That kid has really added so much to our team. Her strength, her physicality, her toughness, her finishing around the basket."

Mulkey is most concerned with UConn freshman Paige Bueckers.

The player-of-the year candidate has put up 62 points, 23 rebounds and 18 assists in UConn's three games. But Baylor's coach, a former point guard herself, said it's Buecker's court vision and ability to anticipate how a play will develop that makes her extremely dangerous.

“Listen, any freshman that can pat Geno on the butt during a game and get away with it, hey that tells you how much he respects her," Mulkey said.

OTHER PLAYERS TO WATCH

UConn junior guard Christyn William showed in the Sweet 16 why she, like Bueckers, was a national high school player of the year, putting up 27 points against over Iowa.

Tennessee transfer Evina Westbrook has also impressed, coming one rebound from a triple-double on Saturday, with 17 points and 10 assists.

Baylor’s Moon Ursin has been averaging 21.7 in the tournament. She had 20 points, five rebounds and four assists in the team's overtime win against Michigan. Dijonai Carrington has led the Lady Bears stifling defense and has scored 50 points in the tournament.

“These are girls you want to ball with, people who trust in you and I surely trust in them," Ursin said.

Auriemma said starting guard Nika Muhl will almost certainly miss her third straight game with a sprained right ankle she suffered in the team's opening-round win over High Point. He said assistant coach Shea Ralph, who left the bubble before the opening round because a family member tested positive for the coronavirus, will not be allowed to return under NCAA rules.

The teams have met eight times since 2010, each winning four of those matchups. The Lady Bears have taken the last two, including a 74-58 Baylor win in Hartford in January of last year.

They were supposed to meet again this January, but that game was canceled after Mulkey was diagnosed with COVID-19.

“It’s two programs that are very proud,” Mulkey said. “I’m certainly not going to outcoach Geno, so our players, they better compete and try to out-play his players.”