Pre-taped SAG Awards go for spirit of live ceremonies past 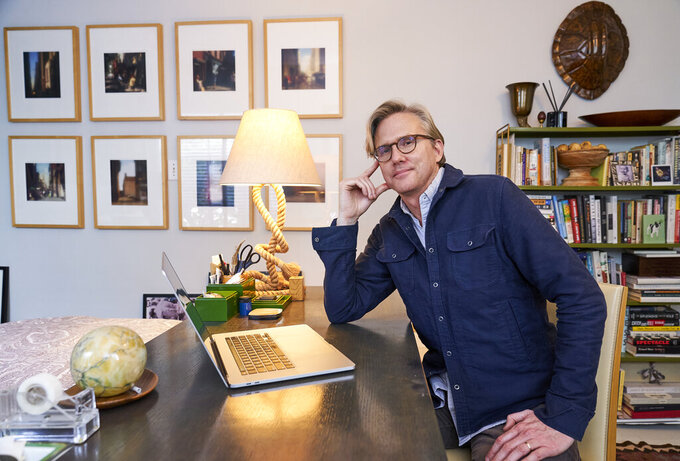 LOS ANGELES (AP) — With the Screen Actors Guild Awards days away, producers gathered for final appraisal of a fast-paced montage honoring the nominees that include Olivia Colman, Sacha Baron Cohen and the late Chadwick Boseman.

“I can't wait to see all of the pieces come together, I think this is going to be really lovely,” Elizabeth McLaughlin, an actor ("Hand of God") and SAG awards committee member, said of Sunday's ceremony airing at 9 p.m. EDT on TNT and TBS.

The meeting was virtual and the SAG event will be pre-taped, bowing to the pandemic that has upended the entertainment industry's awards season. For the SAG honors, the challenge became how to evoke the tradition of ceremonies past.

Key among them: the hallmark “I Am an Actor" declaration that stars make to the camera on awards night, sometimes paired with a brief career anecdote. That staple inspired this year's docuseries-style segments celebrating actors and their craft.

“Very early on, we were really struggling with what the show would look like and we went through, I don’t know how many, different iterations and concepts,” said Jon Brockett, a longtime producer of the ceremony and the guild's national director of programming.

“It was the network that really pushed us to think out of the box this year,” Brockett said. "What we came up with, and the network ended up loving, was this reimagining of the ‘I Am an Actor’ stories which typically opened our show.”

Jason George, who plays Dr. Ben Warren on “Grey’s Anatomy” and “Station 19” and is a SAG awards committee member, suggested some big stars may have joined in because of their lockdown-induced doldrums.

“In a normal year, I don’t know we would have gotten them. I think everybody was ready to let their hair down and put it out there,” George said, without dropping names. “There’s a lot of fun things that... (will) make you smile and think, ‘OK, I don’t care how famous you are, you’re in this with me.’"

For the mini-docs, the goal was to create an engaging narrative with actors' recollections on specific themes or topics and adhere to a high production standard. That meant actors had to agree to work with in-person camera crews.

In short, Zoom was out.

“They trusted us, they just wanted to understand" why they couldn't contribute online, said Maggie Barrett Caulfield, veteran talent booker for the ceremony. “Once we let them know that we were expanding on that incredible signature of ‘I Am an Actor’" and how it would be done, she said, many were game.

Tapings took place at actors' homes or on sets, and precautions against COVID-19 included keeping crew to a minimum and coronavirus testing, Barrett Caulfield said.

Helen Mirren waited patiently in her backyard for a pesky helicopter to pass so taping could resume without the overhead buzz. Daveed Diggs, in production on the TNT series “Snowpiercer,” made time for an interview, with the series’ virus-vetted crew enlisted to record it.

In familiar settings, actors were inclined to relax and open up, said SAG Awards writers Matt Roberts and Beth Sherman, who conducted the interviews.

"They're sharing a lot of things, they've got a sense of humor about themselves, and you're really getting a sense of who they are as a person as well as an actor,” Sherman said.

Many touched on the pandemic year, Roberts said, addressing the common "challenges of spending way too much time at home, being so thankful that we all have an operating television.”

Sliced in half to an hour, the SAG Awards ceremony will include an “in memoriam” tribute created by Patrick Doody, maker of the nominees package that his fellow producers gave an enthusiastic thumbs-up this week.

Award winners will claim their trophies in pre-recorded presentations that the guild fervently hopes stay under wraps until after airtime Sunday.

Other awards ceremonies facing virus-imposed constraints have included as many live — or seemingly live — moments as feasible, but their best efforts drew audience yawns in the form of low ratings. Even an inventive Grammy ceremony with performances by top artists saw its viewership drop by half compared to last year.

Whether the SAG Awards evades that fate remains to be seen, but producer Brockett said he believes the telecast's approach will be entertaining and, perhaps, a link to better times.

"It was a great way to sort of bridge the gap between last year and what we hope next year is a much more normal show,” he said.