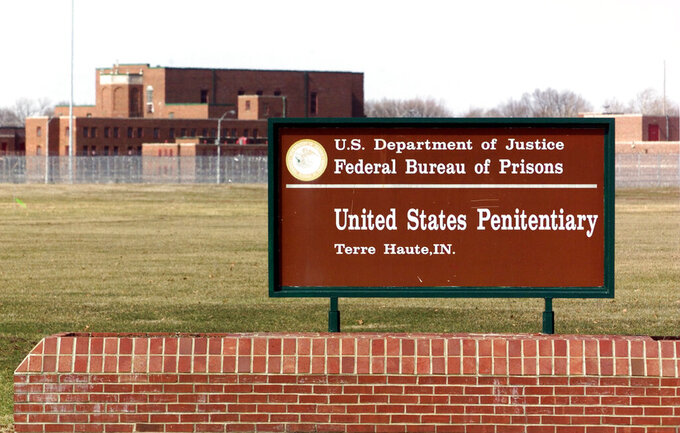 FILE - In this May 16, 2001, file photo, the entrance to the U.S. Penitentiary in Terre Haute, Ind. A Zen Buddhist priest wants a federal judge to stop the execution of a federal death row inmate he’s been counseling and argues he would be put at high risk for the coronavirus if the execution happens this month. Dale Hartkemeyer goes by the religious name Seigen. He filed a lawsuit Thursday in federal court in Indiana. The 68-year-old wants the court to delay Wesley Ira Purkey’s execution until a coronavirus vaccine is available or there’s a widespread effective treatment. Purkey is one of four federal death row inmates scheduled to be executed in July and August. (AP Photo/Michael Conroy, File)

WASHINGTON (AP) — A Zen Buddhist priest, who is a spiritual adviser to one of three federal death row inmates scheduled to be executed this month, filed a lawsuit Thursday arguing the Bureau of Prisons is putting him at risk for the coronavirus by moving forward with executions during a nationwide pandemic.

Dale Hartkemeyer, who goes by the religious name Seigen, argues that he would be putting his life at risk if the federal government proceeds to execute Wesley Ira Purkey, as scheduled on July 15, because of his prior medical conditions including respiratory issues.

The 68-year-old is asking a federal judge to delay Purkey’s execution until a coronavirus vaccine is available or there’s a widespread effective treatment.

Hartkemeyer said in court papers he has visited Purkey monthly as his priest since January 2009 to provide him with spiritual guidance and counseling.

"I’m being asked to make an impossible decision — violate my religious beliefs or risk my health and life by attending an execution that could become a ‘super-spreader’ event for COVID-19," Hartkemeyer wrote in a blog post.

Purkey, a devout Buddhist, is one of four federal inmates scheduled to be put to death in July and August. Attorney General William Barr directed the federal Bureau of Prisons to schedule the executions, ending an informal moratorium on federal capital punishment as the issue receded from the public domain.

Barr had initially scheduled five executions set to begin in December, but some of the inmates challenged the new procedures in court, arguing that the government was circumventing proper methods to wrongly execute inmates quickly. The executions were rescheduled last month after an appeals court threw out a lower court ruling that put the executions on hold. This week, the Supreme Court refused to block the executions.

The executions are scheduled to resume as the country is still battling a major coronavirus pandemic and the number of inmates infected at jails and prisons across the U.S. is approaching 50,000 nationwide, according to data by The Associated Press and the Marshall Project. But federal officials have insisted that precautions will be put in place — including temperature checks and a requirement to wear masks — and that they are obligated to carry forward sentences imposed in the court system.

The federal prison system has struggled to combat the coronavirus pandemic behind bars. As of Wednesday, there were five confirmed coronavirus cases at USP Terre Haute, the prison where the executions are scheduled to take place. One inmate there has died.

Hartkemeyer argues that he must be present at the execution to be a spiritual guide for Purkey and to provide “spiritual consolation and compassion to him during this time, helping him attain peace of mind as he leaves this life.”

“It’s vital that I be there, as Wes’s priest, to ensure this peaceful transition from life to death during his most dire moment of distress — his ultimate crisis — as he sits at the threshold of death," he wrote. "I will chant from behind a plexiglass barrier to ensure his peace of mind while passing and, through my physical presence, serve as a spiritual reminder to Wes of all the religious lessons I have taught him as he passes on from this life. This is my sacred duty.”

But he argues that means risking his own life. If he couldn’t be there, it would “constitute a troubling violation of my religious tenets and priestly obligations,” the lawsuit says.

“He’s in this position where he has to decide between fulfilling his spiritual duty and trying to attend the execution and between protecting his own life and health and safety,” said Cassandra Stubbs, the director of the Capital Punishment Project at the American Civil Liberties Union, which is representing Hartkemeyer.

“There’s absolutely no reason to do it now in the pandemic. It’s really morally abhorrent,” Stubbs said.

Purkey’s lawyers are separately asking a federal judge to halt his execution, arguing that he isn’t mentally fit to be executed because he suffers from “advancing Alzheimer’s disease and deteriorating cognitive functioning.”

Purkey, of Lansing, Kansas, was sentenced to death for the 1998 killing of 16-year-old Jennifer Long after picking her up in Kansas City, Missouri. Purkey raped Long, stabbed her repeatedly and used a chainsaw to cut her body into pieces. He burned her remains in a fireplace and then dumped her ashes 200 miles (322 kilometers) away in a septic pond in Clearwater, southwest of Wichita. He was also convicted of using a claw hammer to kill an 80-year-old Kansas woman, Mary Ruth Bales, who suffered from polio.

Purkey had a long history of childhood trauma, was sexually abused by family members and a Catholic priest and was beaten by other family members, said Liz Vartkessian, a mitigation specialist who has worked with Purkey’s legal team and has visited him dozens of times in the last five years.

“His case is replete with instances where he has expressed a deep remorse,” she said

But recently, Purkey’s mental health has seriously deteriorated to the point where he doesn’t have the stamina for long visits with his legal team and often forgets key facts and dates, she said. Correction officers have to help him write down a schedule to remember his visits with his lawyers, she said.

He has also had a long history of paranoia and delusions and believes the Justice Department is moving forward with his execution because of many complaints and lawsuits he’s brought in prison, even though most have failed, Vartkessian said.

“It’s hard to find any rational explanation for trying to set those executions so quickly," Stubbs said, “especially when we haven’t had an execution in 17 years.”