Pritzker: Stay-home lawsuit a 'stunt,' should be overturned 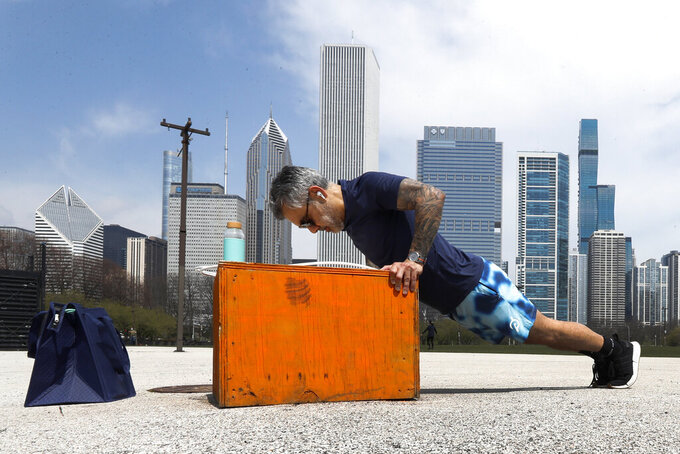 Raj Asarpota does push-up at the Petrillo Music Pavilion, the site of many summertime live music events, in Chicago's Grant Park Tuesday, April 28, 2020. Temperatures continue climbing for the second day in a row, forecasted to reach the 70s. (AP Photo/Charles Rex Arbogast)

SPRINGFIELD, Ill. (AP) — The statewide stay-at-home order aimed at stemming the spread of the coronavirus remains in place through May 30, Gov. J.B. Pritzker said Tuesday, despite a southern Illinois judge's ruling that the Democrat exceeded his authority with the executive decree.

The state attorney general filed an intention to appeal Clay County Circuit Judge Michael McHaney's ruling on Monday that the order violates civil liberties. The ruling was on behalf of Republican Rep. Darren Bailey of Xenia but it opens the door for more challenges.

“This rule only applies to one person because it was only ever about one person,” Pritzker said at his daily COVID-19 briefing. “This was a political stunt designed so that the representative can see his name in headlines, and unfortunately he has briefly been successful in that most callous of feats.”

Rep. John Cabello, a Republican from Machesney Park, said Tuesday that he plans to file a similar lawsuit but that his will benefit everyone in the state.

“I want to see everyone get back to a normal, American way of life," Cabello said.

The state reported another 144 COVID-19 deaths Tuesday, for a total of 2,125 and 2,219 more people tested positive, bringing the state's total to 48,102. The actual number of infections is likely far higher because many people haven't been tested and studies suggest people can be infected without feeling sick.

Pritzker issued a state disaster declaration March 9, when there were just 10 COVID-19 cases, which allowed him to take emergency public safety measures for 30 days. He has closed schools, nonessential business, and last week, he extended the stay-at-home order through May. It requires people to stay home except for going to essential jobs, grocery shopping, medical visits or emergencies.

Pritzker's lawyers said the state Constitution provides police powers to stop pandemics or other crises. They noted that the Illinois General Assembly has not objected to the extension and that the “urgent circumstances” presented by the coronavirus demand urgent action. The emergency actions have and continue to prevent “thousands of deaths,” Pritzker said.

“The intention in fact is to save people’s lives,” he said.

Bailey said he wants people to live “safely, respectfully ... and to take certain precautions” while returning to work and undoing the pandemic's economic damage.

The legal skirmish reflects how the virus has escalated tensions between Chicago and its five “collar” counties and the rest of the state. Some non-Chicagoans see the virus as a big-city problem. As of Tuesday, 90% of the state's cases were in Chicago and its suburbs. Bailey's home of Clay County had two. Cabello's Winnebago County, whose seat, Rockford, is the state's third-largest city, had 365.

Pritzker argues that several counties with the highest rates of infections and deaths from the disease are in southern Illinois. And in many places with low numbers, relatively few people have been tested.

Pritzker could render the lawsuit moot by calling the General Assembly into session and securing legislative support for the continued order. But lawmakers haven't met since early March because of social-distancing guidelines and Pritzker said he is confident McHaney's ruling will be overturned.