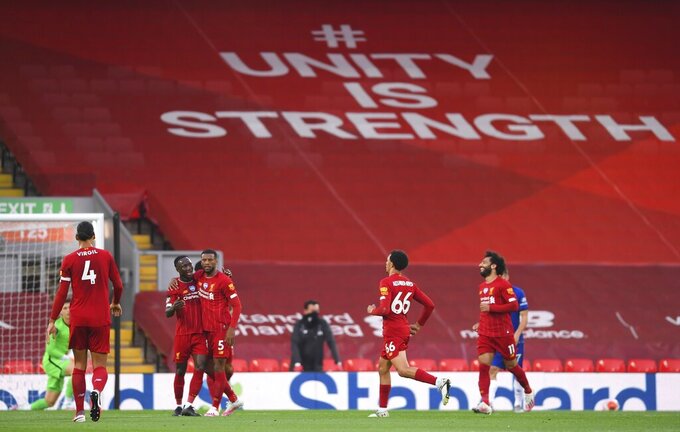 FILE - In this Wednesday, July 22, 2020, file photo, Liverpool's Naby Keita, second left, celebrates after scoring the opening goal during the English Premier League soccer match between Liverpool and Chelsea at Anfield stadium in Liverpool, England. After the competition was brought to a sudden halt in the second week in March, abandoning the season became a very real prospect as the pandemic death toll rose. The only safe way of resuming after a 100-day shutdown was restricting capacities to fewer than 300 people. (Laurence Griffiths, Pool via AP, File)

LIVERPOOL, England (AP) — Long after the English Premier League trophy was handed out inside Anfield, Liverpool fans were still clambering onto the gates after midnight, setting off flares that filled the sky with a red haze.

Even the imposition of a police dispersal order — and pandemic social distancing requirements — could not deter the Liverpool faithful from squeezing up to the entrance to the Kop. It was the closest supporters could get to a party the stadium has been waiting 30 years to witness.

Only a few hundred key personnel were permitted inside Anfield for Wednesday's game against Chelsea, including players, coaches and, after a late reprieve, family members.

Being a journalist for The Associated Press secured one of the few, privileged spots at Anfield to see the champions crowned after the most remarkable season since the English league started in 1888. Denied to any fan of the team, this was a chance to complete the set of being in the stadium to witness Liverpool add the Premier League trophy to last year's European Cup in Madrid, followed by the Club World Cup in Doha.

It was a sight that might not have been witnessed at all. After the Premier League was brought to a sudden halt in the second week in March, abandoning the season became a very real prospect as the coronavirus pandemic death toll mounted.

The only safe way of resuming after a 100-day shutdown was restricting capacities to fewer than 300 people and shutting out the fans who are the lifeblood of the game and provide the atmosphere and passion which the league has long made selling points.

Stadium concourses were empty. The shutters were down on the bars and merchandise stands. Signs outside told fans to stay home, with even pubs still closed when the league resumed on June 17.

A maximum 25 written press journalists had the unprecedented and peculiar vantage point of being among the few allowed into stadiums that can seat up to 90,000 for games still being watched by millions worldwide. The media tribune gatherings were larger than anything allowed in wider society.

“This is now my interview number seven I think,” Liverpool manager Jürgen Klopp told reporters after one game as the 30-year title drought was ended. “No crowd in the stadium but obviously all the journalists were allowed to come.”

Most TV viewers had artificial crowd noise overlaid to provide an air of normality. Inside the stadiums, the abnormality provided intrigue and new experiences to report on while attending 16 games across 35 days since the restart, including FA Cup semifinals at the empty Wembley national stadium.

When peering down at laptops to complete match reports as the final whistle nears, reporters can rely on sudden gasps or expressions of rage from fans to be alerted to any incidents. Empty stadium games mean eyes need to be fixed on the action even more while taking advantage of the sounds no longer drowned out by fans.

Instructions shouted from the bench — and profanities from players — can be detected with clarity.

The thud of players colliding and the ball rattling against the crossbar boom around the empty stadiums.

The media has to be on guard for the silence, too. Sometimes the only voices heard have been commentators calling games for radio who often sit closer to the field than their television counterparts.

“I need to whisper now,” Conor McNamara told BBC radio listeners during the first weekend after the restart at Aston Villa’s game against Chelsea.

“When I was criticizing the goalkeeper, Dean Smith and John Terry both looked over,” McNamara said of the Villa management team. “This is the trouble with no fans. I don’t like when the manager can hear me and he’s only 15 yards away.”

Silencing phones and laptops became a necessity in media tribunes to prevent message alerts and phone calls being heard across the cavernous arenas — particularly by the substitutes.

Social distancing requirements on the benches meant that at some stadiums, including Arsenal and Manchester City, substitutes were spread out with the result that some were just in front of the media seats.

Players and coaches were in the stadium red zone where COVID-19 testing was required with health passport barcode checks on entry. They could speak to media only at a distance or on video calls.

Writers had to stay in the amber zone wearing face coverings after temperature checks to ensure they weren't displaying coronavirus symptoms. The most rigorous medical screenings have been at Wembley for the FA Cup semifinals where tents were installed outside the stadium so media could also be checked for their oxygen levels, and respiratory and pulse rate.

It has been healthier than usual inside the stadiums, with none of the calorific spreads of media food as indoor areas are shut. Even the few executives allowed into directors’ boxes have often been left eating supermarket sandwiches with the usual gourmet catering facilities closed.

Perhaps the only group to see positives in the doors being closed to supporters are the referees now temporarily spared verbal abuse — from the stands at least.

But in a season when VAR made its contentious debut in the Premier League, not even the need to complete the fixtures by this Sunday could end the lengthy stoppages for replays to be raked over. With music temporarily permitted in the empty stadiums during breaks of play, Tottenham used high-tempo beats to add to the tension during VAR reviews.

The absence of the natural soundtrack provided by fans can be most glaring when the lineups are read out — with no cheers to greet each name — and after goals. Without thousands of fans to celebrate in person, the only roars have been from players and coaches.

Shut your eyes and you could be at a soccer match in a local park rather than one in the world's richest league. Sometimes, the paramedics on duty have stood to applaud wondrous passages of play which otherwise could receive little recognition in the stadiums.

Some medics don't have far to travel to games with Watford's hospital looming over one corner of Vicarage Road. Even the stadium's car park is shared with tents for the town's COVID-19 testing, providing a reminder of the health emergency that made this the longest season.

The players longing for their support cast; the executives hit financially by the lack of matchday revenue; and the media longing for the sense of occasion provided by real fans. All will be hoping the usual din of the crowd will be back soon — perhaps even louder — after the new season begins in September.