Profit up 87% at Buffett's firm, but virus slows businesses 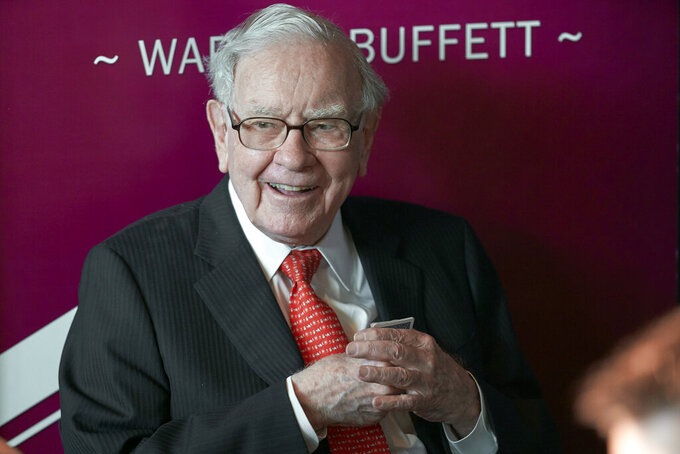 FILE - In this May 5, 2019, file photo Warren Buffett, Chairman and CEO of Berkshire Hathaway, smiles as he plays bridge following the annual Berkshire Hathaway shareholders meeting in Omaha, Neb. Buffett's company has purchased another $400 million of Bank of America stock less than a week after buying roughly $800 million of the bank's stock. Berkshire Hathaway Inc. said Monday, July 27, 2020 it held 998 million Bank of America shares after the latest purchases, which represents roughly 11.5% of the bank's stock. (AP Photo/Nati Harnik, File)

OMAHA, Neb. (AP) — Warren Buffett's company reported an 87% jump in its second-quarter profit as the paper value of its investment portfolio increased with the stock market, but it took a roughly $10 billion write down on the value of its aircraft parts manufacturing business because of the economic impact of the coronavirus pandemic.

Berkshire said it cut the value of its Precision Castparts unit because of how much the pandemic has hurt air travel and businesses that support that airline industry. Precision Castparts cut about 10,000 jobs, or about 30% of its workforce, during the first half of the year as it responded to the reduced demand.

CFRA analyst Cathy Seifert said the Precision Castparts write-down — combined with Berkshire's sale of all its airline stocks earlier this year — suggests that Buffett expects the pandemic to have a lasting negative impact on the airline business.

Buffett has long said Berkshire’s operating earnings offer a better view of quarterly performance because they exclude investments and derivatives, which can vary widely. They also exclude the Precision Castparts write down. By that measure, Berkshire’s operating earnings declined 10% to $5.5 billion, or $3,420.48 per Class A share, as most of its businesses were hurt by restrictions related to the coronavirus pandemic. That's down from $6.1 billion, or $3,754.83 per share.

The four analysts surveyed by FactSet expected operating earnings per Class A share of $3,182.06.

The pandemic's impact on Berkshire's businesses was significant, but Edward Jones analyst Jim Shanahan said it may not have been as bad as expected, partly because Geico insurance and BNSF railroad performed well during the quarter.

Like all auto insurers, Geico benefited from lower claims because there were fewer accidents as people drove less with many people working from home. It reported a $2.1 billion underwriting profit in the quarter, up from $393 million a year ago. Also, a $2.5 billion in premium reductions Geico is offering customers because of the lower claims will be spread over the coming year as people renew policies instead of taking effect all in the second quarter when most other insurers sent refunds.

BNSF's profit declined 15% to $1.1 billion during the quarter as the number of shipments it handled fell 18%. But the railroad was able to cut its operating expenses 26% to help offset the lower volume. Shanahan said BNSF performed better than most other major railroads.

Berkshire was holding nearly $147 billion cash and short-term investments at the end of the second quarter, but Buffett did use $5.1 billion during the quarter to repurchase Berkshire shares, which is the biggest buyback since Berkshire relaxed its policy on repurchases in 2018.

Buffett also found a way to use more of that cash after the quarter ended. First, he agreed to buy Dominion Energy’s natural gas pipeline and storage business in early July for $4 billion and take on $5.7 billion of Dominion debt. Then Buffett’s company bought roughly $2.1 billion worth of Bank of America stock in late July and early August to give it control of 11.9% of the bank's stock.

Berkshire Hathaway Inc. owns more than 90 companies, including the railroad and insurance, utility, furniture and jewelry businesses. The company also has major investments in such companies as Apple, American Express, Coca-Cola and Bank of America.