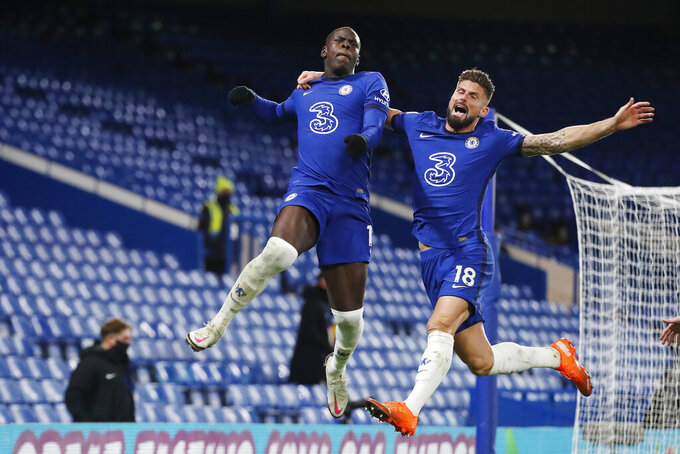 LONDON (AP) — Olivier Giroud netted his fifth goal of the week and Christian Pulisic scored for the first time in the Premier League this season to lead Chelsea’s comeback in a 3-1 win over Leeds on Saturday.

Handed a start after scoring all of Chelsea's goals in a 4-0 midweek win at Sevilla in the Champions League, Giroud was on target again when he turned in Reece James' cross to cancel out Leeds' fourth-minute opener by Patrick Bamford — a former Chelsea player.

Kurt Zouma put Chelsea in front with a header from Mason Mount's corner in the 61st minute and Pulisic, who came on as a first-half substitute for the injured Hakim Ziyech, capped the fightback with a third in stoppage time by sliding in to convert Timo Werner's pass.

Pulisic, the U.S. international, is returning from a second spell out through injury this season.

Chelsea moved to the top of the league by a point, though it could be displaced by second-place Tottenham on Sunday. Spurs host Arsenal in the north London derby.

There were 2,000 fans in attendance for the match at Stamford Bridge as the Premier League allowed supporters back in stadiums for the first time since the outbreak of the coronavirus in March. The measure came in at the end of England's second national lockdown, with only teams from certain towns and cities allowed to welcome back fans depending on the rate of infection in the local area.

“We really wanted to win for (the fans) and carry on the good momentum," said Giroud, referring to Chelsea's 16-match unbeaten run in all competitions.