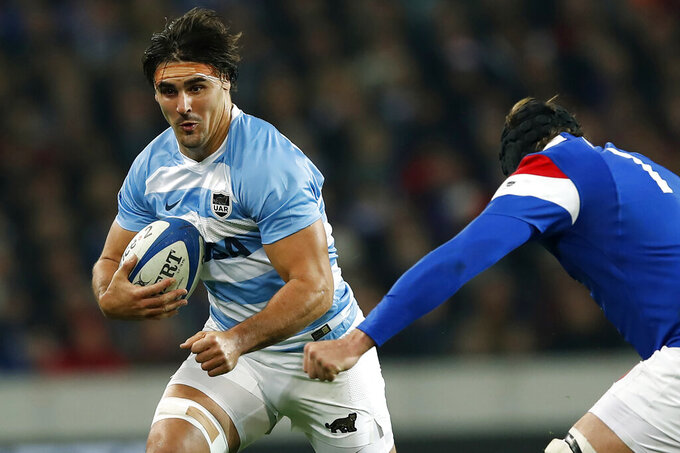 The 27-year-old backrower, who has made 60 test appearances for Argentina, is currently playing for Paris-based Stade Francais.

Argentina hasn't played in Super Rugby since a tournament that involved clubs from five countries was suspended in March last year because of the coronavirus pandemic.

“We know Pablo is keen to get back to playing Super Rugby and we’re excited by the prospect of him joining us here in Christchurch in 2022,” Crusaders chairman Colin Mansbridge said Friday. “We are still working through the finer detail of this with Pablo and his agent but we look forward to welcoming him into our environment once that is complete.”

Crusaders head coach Scott Robertson, a former All Blacks backrower, described Matera as “one of the premier loose forwards in world rugby.”

“He’s a skillful and tenacious player with genuine leadership qualities who has impressed us with his physicality and work ethic. We’re really excited about him joining us next season and sharing his experience with our young loose forward group who are learning their craft.”

Matera’s move to the Crusaders was heralded Thursday by news reports in Britain and France.

Matera told French newspaper Midi Olympique his move is conditional on being granted a work visa and meeting strict criteria around foreign players in Super Rugby in New Zealand.

“It’s not easy to join a franchise from New Zealand,” Matera said. “They prioritize their young players from their academies. It’s very good but you can’t take the place of a youngster.”

Matera led the Pumas to their first-ever win over the New Zealand All Blacks during the Tri-Nations tournament in Australia last November. He was temporarily dropped from the team when controversial social media posts he wrote as a teenager re-surfaced, but that ban subsequently was over-turned.