With Purdy leading way, Cyclones look to make some history 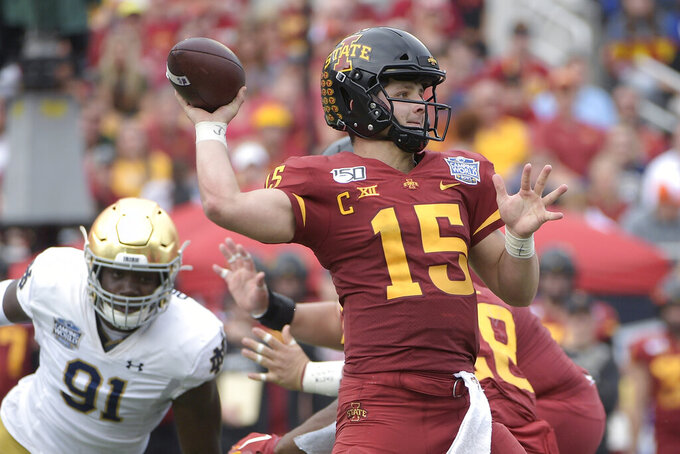 FILE - In this Dec. 28, 2019, file photo, Iowa State quarterback Brock Purdy (15) throws a pass in front of Notre Dame defensive lineman Adetokunbo Ogundeji (91) during the first half of the Camping World Bowl NCAA college football game, in Orlando, Fla. Purdy, who led the most productive offense in program history, has the look of a high-round pick if he declares for the NFL draft after his junior year. (AP Photo/Phelan M. Ebenhack, File)

Iowa State enters this season coming off one of its best three-year stretches and with the belief it's ready to do something it has never done — make the Big 12 championship game.

“I think we're really close,” coach Matt Campbell said. "Being really close and doing it are two different things, so we are going to have to figure out how to get it done.”

The Cyclones haven't finished higher than a tie for third place since the Big 12 dropped divisional play in 2011. An overtime loss to Missouri denied the Cyclones a North Division title and spot in the championship game in 2004. The frustration doesn't end there. Iowa State's 107-year conference championship drought is the longest in the Football Bowl Subdivision.

Iowa State, which has won 23 games since 2017 and gone to three straight bowls, brings back nine starters on offense and seven on defense from a team that came close to being much better than its 7-6 record.

Brock Purdy, who led the most productive offense in program history, has the look of a high-round pick if he declares for the NFL draft after his junior year. Running back Breece Hall came on strong the second half of last season and is a rising star. Tight end Charlie Kolar is the best tight end in the conference.

The offensive line, secondary and quarterback depth are concerns, as is the ability to win close games.

The Cyclones' first four losses last year were by a combined 11 points. Among those were a 34-27 home loss to Oklahoma State that came on a game-turning pick-six Purdy threw in the fourth quarter, and a crushing 42-41 defeat at top-10 Oklahoma the next week.

“The next step for me is to elevate everybody else’s game,” Purdy said. “We have great guys surrounding me. If I could get all those guys on the same page, we could roll from there.”

The Cyclones will wear a patch on their jerseys honoring Jack Trice this season. Trice, the first Black athlete at Iowa State, died in 1923 from injuries suffered in the second game of his football career.

Iowa State plays at Jack Trice Stadium, and there is a Trice statue on campus.

The patch resembles the uniform design Trice wore in 1923.

“Jack Trice’s legacy is powerful and it’s certainly one we embrace in our football program,” Campbell said. “Competing in Jack Trice Stadium is an honor and we never want to lose sight on the sacrifices he made. His legacy continues to inspire all of those in our program as we strive to promote equality in our community and the world around us.”

BREECE IS THE WORD

Hall came on at midseason and finished fourth among FBS true freshmen with 897 rushing yards. Campbell compared him to former Cyclones great David Montgomery and NFL star Kareem Hunt, who played for Campbell at Toledo.

“One of the things I love about Breece is he’s a young man who is trending toward becoming a great player,” Campbell said. “I was proud of his off-the-field habits this winter and the shape he’s come back in. You can tell he’s driven to take the next step.”

Bailey, who broke out in 2018 with a team-leading eight sacks, considered declaring for the draft after a leg injury in late September ended his season and streak of 37 straight starts.

The fifth-year senior returned to Ames a well-chiseled 6-foot-2 and 261 pounds and with renewed sense of responsibility to be a leader of the defense. His 18.5 sacks are tied for most on the Iowa State career chart and his 31.5 tackles for loss rank fifth.

“He’s had success and tough times,” Campbell said. “He’s had the ability to grow from those situations. Now you see a young man who is humble, who has a great interest in inspiring others.”

Iowa State’s engineering school developed clear plastic barriers that slip into helmet facemasks to help prevent the spread of coronavirus. Coaches and staff also are wearing shields over their faces during practices. According to Iowa State's most recent update, on Aug. 19, there were 21 positive COVID-19 tests out of 860 taken by athletes and staff since June 8.

It took the Cyclones until mid-August to sign Louisiana-Lafayette as their lone nonconference opponent. The teams meet Sept. 12.

The original nonconference schedule was made up of South Dakota, Iowa and UNLV. Those teams became unavailable because of pandemic restrictions, and the Cyclones on July 28 announced Ball State of the Mid-American Conference would be its nonconference opponent. Ten days later, the MAC called off fall football.